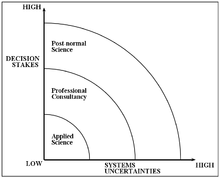 Jerome Ravetz and Silvio Funtowicz, circa 1988, at Sheffield

Post-normal science (PNS) represents a novel approach for the use of science on issues where "facts [are] uncertain, values in dispute, stakes high and decisions urgent". [1] PNS was developed in the 1990s by Silvio Funtowicz and Jerome R. Ravetz. [2] [3] [1] It can be considered as a reaction to the styles of analysis based on risk and cost-benefit analysis prevailing at that time, and as an embodiment of concepts of a new "critical science" developed in previous works by the same authors. [4] [5] In a more recent work PNS is described as "the stage where we are today, where all the comfortable assumptions about science, its production and its use, are in question". [6]

According to its proponents [1] Silvio Funtowicz and Jerome R. Ravetz, the name "post-normal science" echoes the seminal work on modern science by Thomas Kuhn. [7] For Carrozza [8] PNS can be "framed in terms of a call for the ‘democratization of expertise’", and as a "reaction against long-term trends of ‘scientization’ of politics—the tendency towards assigning to experts a critical role in policymaking while marginalizing laypeople". For Mike Hulme (2007), writing on The Guardian Climate change seems falls into the category of issues which are best dealt with in the context of PNS and notes that "Disputes in post-normal science focus as often on the process of science - who gets funded, who evaluates quality, who has the ear of policy - as on the facts of science". [9] From the ecological perspective post-normal science can be situated in the context of 'crisis disciplines' – a term coined by the conservation biologist Michael E. Soulé to indicate approaches addressing fears, emerging in the seventies, that the world was on the verge of ecological collapse. In this respect Michael Egan [10] defines PNS as a 'survival science'. More recently PNS has been defined as a movement of ‘informed critical resistance, reform and the making of futures’. [11]

Moving from PNS Ziauddin Sardar developed the concept of Postnormal Times (PNT). Sardar was the editor of FUTURES when it published the article ‘Science for the post-normal age’ [1] presently the most cited paper of the journal. A recent review of academic literature conducted on the Web of Science and encompassing the topics of Futures studies, Foresight, Forecasting and Anticipation Practice [12] identifies the same paper as "the all-time publication that received the highest number of citations".

"At birth Post-normal science was conceived as an inclusive set of robust insights more than as an exclusive fully structured theory or field of practice". [13] Some of the ideas underpinning PNS can already be found in a work published in 1983 and entitled "Three types of risk assessment: a methodological analysis" [14] This and subsequent works [2] [3] [1] [4] show that PNS concentrates on few aspects of the complex relation between science and policy: the communication of uncertainty, the assessment of quality, and the justification and practice of the extended peer communities.

Coming to the PNS diagram (figure above) the horizontal axis represents ‘Systems Uncertainties’ and the vertical one ‘Decision Stakes’. The three quadrants identify Applied Science, Professional Consultancy, and Post-Normal Science. Different standards of quality and styles of analysis are appropriate to different regions in the diagram, i.e. Post-normal science does not claim relevance and cogency on all of science's application but only on those defined by the PNS's mantram with a fourfold challenge: ‘facts uncertain, values in dispute, stakes high and decisions urgent’. For applied research science's own peer quality control system will suffice (or so was assumed at the moment PNS was formulated in the early nineties), while professional consultancy was considered appropriate for these settings which cannot be ‘peer-reviewed’, and where the skills and the tacit knowledge of a practitioner are needed at the forefront, e.g. in a surgery room, or in a house on fire. Here a surgeon or a fireman takes a difficult technical decision based on her or his training and appreciation of the situation (the Greek concept of ‘ Metis’).

There are important linkages between PNS and complexity science, [15] e.g. system ecology ( C. S. Holling) and hierarchy theory ( Arthur Koestler). In PNS, complexity is respected through its recognition of a multiplicity of legitimate perspectives on any issue; and reflexivity is realised through the extension of accepted ‘facts’ beyond the supposedly objective productions of traditional research. Also, the new participants in the process are not treated as passive learners at the feet of the experts, being coercively convinced through scientific demonstration. Rather, they will form an ‘extended peer community’, sharing the work of quality assurance of the scientific inputs to the process, and arriving at a resolution of issues through debate and dialogue. [16] The necessity to embrace complexity in a post normal perspective to understand and face zoonoses is argumented by David Waltner-Toews. [17]

PNS concept of extended peer community moves from and transcends the familiar concept of scientific peer community relative to a well-defined field of scientific research. The peer community is extended in two respects: first, more than one discipline is assumed to have a potential bearing on the issue being debated, thereby providing different lenses to consider the problem. Second the community is extended to lay actors, taken to be all those with stakes, or an interest, in the given issue. Perhaps the best justification of the concept is offered by Paul Feyerabend in Against Method. [18] For Feyerabend the participation of experts together with non-experts would allow the citizens to mature, inter alia by realizing that the experts are themselves lay-people outside their restricted field of competence. For Giandomenico Majone [19] "In any area of public policy the choice of instruments, far from being a technical exercise that can be safely delegated to the experts, reflects as in a microcosm all the political, moral, and cultural dimensions of policy-making." The same author notes: "Dialectical confrontation between generalists and experts often succeeds in bringing out unstated assumptions, conflicting interpretations of the facts, and the risks posed by the projects". These considerations justifies the need for an extended peer community, as the arena where the policy instruments and options can be discussed with - but without deference to - the experts and the authorities.

The lay members of the community thus constituted may also take upon themselves active 'research' tasks; this has happened e.g. in the so-called 'popular epidemiology', [20] when the official authorities have shown reticence to perform investigations deemed necessary by the communities affected - for example - by a case of air or water pollution, [21] and more recently ‘citizen science’. [22] The extended community can usefully investigate the quality of the scientific assessments provided by the experts, the definition of the problem, as well as research priorities and research questions. [23]

Thus, the extension of the peer community is not only ethically fair or politically correct, but also enhances the quality of the relevant science. An example is provided by Brian Wynne, who discusses the Cumbrian sheep farmers' interaction with scientist and authorities in the relation to the Chernobyl radioactive fallout. [24]

The concept of extended peer community was developed in the context of politicised quality controversies in science (such as 'housewife' or 'popular' epidemiology [25]), early evidence-based medicine (the Cochrane collaboration), and the total quality management ideas of W. Edwards Deming, in particular quality circles.

Beside its dominating influence in the literature on 'futures', [12] PNS is considered to have influenced the ecological ‘conservation versus preservation debate’, especially via its reading by American pragmatist Bryan G. Norton. According to Jozef Keulartz [26] the PNS concept of "extended peer community" influenced how Norton's developed his 'convergence hypothesis'. The hypothesis posits that ecologists of different orientation will converge once they start thinking 'as a mountain', or as a planet. For Norton this will be achieved via deliberative democracy, which will pragmatically overcome the black and white divide between conservationists and preservationists. More recently it has been argued that conservation science, embedded as it is in a multi-layered governance structures of policy-makers, practitioners, and stakeholders, is itself an 'extended peer community', and as a result conservation has always been ‘post-normal’. [27]

Other authors [28] attribute to PNS the role of having stimulated the take up of transdisciplinary methodological frameworks, reliant on the social constructivist perspective embedded in PNS.

As summarized in a recent work "the ideas and concepts of post normal science bring about the emergence of new problem solving strategies in which the role of science is appreciated in its full context of the complexity and the uncertainty of natural systems and the relevance of human commitments and values." [31]

A criticism of post-normal science is offered by Weingart (1997) [42] for whom Post-normal science does not introduce a new epistemology but retraces earlier debates linked to the so-called "finalization thesis". For Jörg Friedrichs [43] – comparing the issues of climate change and peak energy – an extension of the peer community has taken place in the climate science community, transforming climate scientists into ‘stealth advocates’, [44] while scientists working on energy security – without PNS, would still maintain their credentials of neutrality and objectivity. Another criticism is that the extended peer community's use undermines the scientific method's use of empiricism and that its goal would be better addressed by providing greater science education.

The crisis of science

It has been argued [45] that PNS scholars have been prescient in anticipating the present crisis in science's quality control and reproducibility. A group of scholars of PNS orientation has published in 2016 a volume on the topic, [46] discussing inter alia what this community perceive as the root causes of the present science's crisis. [47] [45] [48] A World View piece published by Jerome R. Ravetz on the journal Nature in 2019 touches upon whether the way science is taught should be reconsidered.

Among the quantitative styles of analysis which make reference to post-normal science one can mention NUSAP for numerical information, sensitivity auditing for indicators and mathematical modelling, Quantitative storytelling for exploring multiple frames in a quantitative analysis, and MUSIASEM in the field of social metabolism. A work where these approaches are suggested for sustainability is in. [49]

In relation to mathematical modelling PNS suggests a participatory approach, whereby ‘models to predict and control the future’ are replaced by ‘models to map our ignorance about the future’, in the process exploring and revealing the metaphors embedded in the model. [50] PNS is also known for its definition of GIGO: in modelling GIGO occurs when the uncertainties in the inputs must be suppressed, lest the outputs become completely indeterminate. [51] In a comment published in Nature 22 scholars take COVID-19 as the occasion for suggesting five ways to make models serve society better. The piece notes "how the operation of science changes when questions of urgency, stakes, values and uncertainty collide — in the ‘post-normal’ regime". [52]

On March 25, 2020, in the midst of the COVID-19 pandemic, a group of scholars of post-normal orientation published on the blog section of the STEPS Centre (for Social, Technological and Environmental Pathways to Sustainability) at the University of Sussex. The piece [53] argues that the COVID-19 emergency has all the elements of a post normal science context, and notes that "this pandemic offers society an occasion to open a fresh discussion on whether we now need to learn how to do science in a different way".

Another special issue on Post Normal Science was published on the journal Science, Technology, & Human Values in May 2011.