Welcome to the writing portal 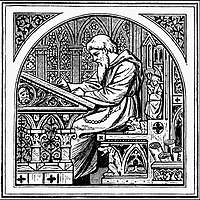 Writing is a medium of human communication that involves the representation of a language with written symbols. Writing systems are not themselves human languages (with the debatable exception of computer languages); they are means of rendering a language into a form that can be reconstructed by other humans separated by time and/or space. While not all languages use a writing system, those with systems of inscriptions can complement and extend capacities of spoken language by enabling the creation of durable forms of speech that can be transmitted across space (e.g., correspondence) and stored over time (e.g., libraries or other public records). It has also been observed that the activity of writing itself can have knowledge-transforming effects, since it allows humans to externalize their thinking in forms that are easier to reflect on, elaborate, reconsider, and revise. Writing relies on many of the same semantic structures as the speech it represents, such as lexicon and syntax, with the added dependency of a system of symbols to represent that language's phonology and morphology. The result of the activity of writing is called a text, and the interpreter or activator of this text is called a reader.

As human societies emerged, collective motivations for the development of writing were driven by pragmatic exigencies like keeping history, maintaining culture, codifying knowledge through curricula and lists of texts deemed to contain foundational knowledge (e.g., The Canon of Medicine) or to be artistically exceptional (e.g., a literary canon), organizing and governing societies through the formation of legal systems, census records, contracts, deeds of ownership, taxation, trade agreements, treaties, and so on. Amateur historians, including H.G. Wells, had speculated since the early 20th century on the likely correspondence between the emergence of systems of writing and the development of city-states into empires. As Charles Bazerman explains, the "marking of signs on stones, clay, paper, and now digital memories—each more portable and rapidly traveling than the previous—provided means for increasingly coordinated and extended action as well as memory across larger groups of people over time and space." For example, around the 4th millennium BC, the complexity of trade and administration in Mesopotamia outgrew human memory, and writing became a more dependable method of recording and presenting transactions in a permanent form. In both ancient Egypt and Mesoamerica, on the other hand, writing may have evolved through calendric and political necessities for recording historical and environmental events. Further innovations included more uniform, predictable, and widely dispersed legal systems, distribution and discussion of accessible versions of sacred texts, and the origins of modern practices of scientific inquiry and knowledge-consolidation, all largely reliant on portable and easily reproducible forms of inscribed language.

Individual, as opposed to collective, motivations for writing include improvised additional capacity for the limitations of human memory (e.g., to-do lists, recipes, reminders, logbooks, maps, the proper sequence for a complicated task or important ritual), dissemination of ideas (as in an essay, monograph, broadside, petition, or manifesto), imaginative narratives and other forms of storytelling, personal or business correspondence, and lifewriting (e.g., a diary or journal). ( Full article...)

Calligraphy (from Greek κάλλος kallos "beauty" + γραφή graphẽ "writing") is a type of visual art. It is often called the art of fancy lettering (Mediavilla 1996: 17). A contemporary definition of calligraphic practice is "the art of giving form to signs in an expressive, harmonious and skillful manner" (Mediavilla 1996: 18). The story of writing is one of aesthetic evolution framed within the technical skills, transmission speed(s) and material limitations of a person, time and place (Diringer 1968: 441). A style of writing is described as a script, hand or alphabet (Fraser and Kwiatkowski 2006; Johnston 1909: Plate 6).

Modern calligraphy ranges from functional hand//-lettered inscriptions and designs to fine-art pieces where the abstract expression of the handwritten mark may or may not compromise the legibility of the letters (Mediavilla 1996). Classical calligraphy differs from typography and non-classical hand-lettering, though a calligrapher may create all of these; characters are historically disciplined yet fluid and spontaneous, at the moment of writing (Pott 2006 and 2005; Zapf 2007 and 2006).

Andrew Robinson was educated at the Dragon School, Eton College where he was a King's Scholar, University College, Oxford where he read Chemistry and finally the School of Oriental and African Studies in London. He is the son of Neville Robinson, an Oxford physicist. He is based in London and is currently a full-time writer.

Robinson has written several books about the history of writing, including: