From Wikipedia
https://en.wikipedia.org/wiki/Portal:Wetlands
Wikipedia portal for content related to Wetlands

A wetland is a land area that is saturated with water, either permanently or seasonally, such that it takes on the characteristics of a distinct ecosystem. The primary factor that distinguishes wetlands from other land forms or water bodies is the characteristic vegetation of aquatic plants, adapted to the unique hydric soil. Wetlands play a number of roles in the environment, principally water purification, flood control, carbon sink and shoreline stability. Wetlands are also considered the most biologically diverse of all ecosystems, serving as home to a wide range of plant and animal life. Wetlands occur naturally on every continent except Antarctica, the largest including the Amazon River basin, the West Siberian Plain, and the Pantanal in South America. The water found in wetlands can be freshwater, brackish, or saltwater. The main wetland types include swamps, marshes, bogs, and fens; and sub-types include mangrove, carr, pocosin, and varzea.

The UN Millennium Ecosystem Assessment determined that environmental degradation is more prominent within wetland systems than any other ecosystem on Earth. International conservation efforts are being used in conjunction with the development of rapid assessment tools to inform people about wetland issues.

Constructed wetlands can be used to treat municipal and industrial wastewater as well as stormwater runoff and they also play a role in water-sensitive urban design.

More about Wetlands ...
Refresh with new selections below (purge)
edit

Kettle (round glacial eye-shaped lake), highlands of Isunngua, Greenland.
A kettle (kettle hole, pothole) is a shallow, sediment-filled body of water formed by retreating glaciers or draining floodwaters. The kettles are formed as a result of blocks of ice calving from glaciers and becoming submerged in the sediment on the outwash plain. Another source is the sudden drainage of an ice-dammed lake. When the block melts, the hole it leaves behind is a kettle. As the ice melts, ramparts can form around the edge of the kettle hole. The lakes that fill these holes are seldom more than 10 m (33 ft) and eventually become filled with sediment. In acid conditions, a kettle bog may form but in alkaline conditions, it will be kettle peatland.

Kettles are fluvioglacial landforms occurring as the result of blocks of ice calving from the front of a receding glacier and becoming partially to wholly buried by glacial outwash. Glacial outwash is generated when streams of meltwater flow away from the glacier and deposit sediment to form broad outwash plains called sandurs. When the ice blocks melt, kettle holes are left in the sandur. When the development of numerous kettle holes disrupt sandur surfaces, a jumbled array of ridges and mounds form, resembling kame and kettle topography.

Kettle holes can form as the result of floods caused by the sudden drainage of an ice-dammed lake. These floods, called jökulhlaups, often rapidly deposit large quantities of sediment onto the sandur surface. The kettle holes are formed by the melting blocks of sediment-rich ice that were transported and consequently buried by the jökulhlaups. It was found in field observations and laboratory simulations done by Maizels in 1992 that ramparts form around the edge of kettle holes generated by jökulhlaups. The development of distinct types of ramparts depends on the concentration of rock fragments contained in the melted ice block and on how deeply the block was buried by sediment. ( Full article...)

The following are images from various wetland-related articles on Wikipedia.
edit 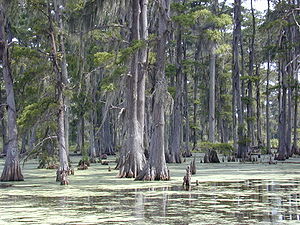