A volcano is a rupture in the crust of a planetary-mass object, such as Earth, that allows hot lava, volcanic ash, and gases to escape from a magma chamber below the surface.

On Earth, volcanoes are most often found where tectonic plates are diverging or converging, and most are found underwater. For example, a mid-oceanic ridge, such as the Mid-Atlantic Ridge, has volcanoes caused by divergent tectonic plates whereas the Pacific Ring of Fire has volcanoes caused by convergent tectonic plates. Volcanoes can also form where there is stretching and thinning of the crust's plates, such as in the East African Rift and the Wells Gray-Clearwater volcanic field and Rio Grande Rift in North America. Volcanism away from plate boundaries has been postulated to arise from upwelling diapirs from the core–mantle boundary, 3,000 kilometers (1,900 mi) deep in the Earth. This results in hotspot volcanism, of which the Hawaiian hotspot is an example. Volcanoes are usually not created where two tectonic plates slide past one another.

Large eruptions can affect atmospheric temperature as ash and droplets of sulfuric acid obscure the Sun and cool the Earth's troposphere. Historically, large volcanic eruptions have been followed by volcanic winters which have caused catastrophic famines. ( Full article...)

The Nevado del Ruiz (Spanish pronunciation:  [neβaðo ðel ˈrwis]), also known as La Mesa de Herveo (English: Mesa of Herveo, the name of the nearby town) is a volcano on the border of the departments of Caldas and Tolima in Colombia, about 129 kilometers (80 mi) west of the capital city Bogotá. It is a stratovolcano composed of many layers of lava alternating with hardened volcanic ash and other pyroclastic rocks. Volcanic activity at Nevado del Ruiz began about two million years ago, since the Early Pleistocene or Late Pliocene, with three major eruptive periods. The current volcanic cone formed during the present eruptive period, which began 150,000 years ago.

The volcano usually generates Vulcanian to Plinian eruptions, which produce swift-moving currents of hot gas and rock called pyroclastic flows. These eruptions often cause massive lahars (mud and debris flows), which pose a threat to human life and the environment. The impact of such an eruption is increased as the hot gas and lava melt the mountain's snowcap, adding large quantities of water to the flow. On November 13, 1985, a small eruption produced an enormous lahar that buried and destroyed the town of Armero in Tolima, causing an estimated 25,000 deaths. This event later became known as the Armero tragedy—the deadliest lahar in recorded history. Similar but less deadly incidents occurred in 1595 and 1845, consisting of a small explosive eruption followed by a large lahar. ( Full article...)
edit

The following are images from various volcano-related articles on Wikipedia. 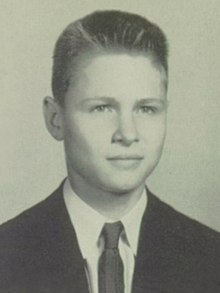 Barry Voight ( /vɔɪt/; born 1937) is an American geologist, volcanologist, author, and engineer. After earning his Ph.D. at Columbia University, Voight worked as a professor of geology at several universities, including Pennsylvania State University, where he taught from 1964 until his retirement in 2005. He remains an emeritus professor there and still conducts research, focusing on rock mechanics, plate tectonics, disaster prevention, and geotechnical engineering.

In April 1980, Voight's publications on landslides, avalanches, and other mass movements attracted the attention of Rocky Crandell of the United States Geological Survey (USGS), who asked him to look at a growing bulge on the Mount St. Helens volcano in the state of Washington. Voight foresaw the collapse of the mountain's north flank as well as a powerful eruption. His predictions came true when St. Helens erupted in May 1980; Voight was then hired by the USGS to investigate the debris avalanche that initiated the eruption. After his work at Mount St. Helens brought him international recognition, Voight continued researching and guiding monitoring efforts at several active volcanoes throughout his career, including Nevado del Ruiz in Colombia, Mount Merapi in Indonesia, and Soufrière Hills, a volcano on the Caribbean island of Montserrat. For his research, publications, and disaster prevention work as a volcanologist and engineer, Voight has been honored with numerous awards, appointments, and medals. ( Full article...)
edit

Mount Hood, a dormant stratovolcano, reflected in the waters of Mirror Lake, Oregon, United States. At 11,249 feet (3,429 metres), Mount Hood is the highest mountain in Oregon and the fourth-highest in the Cascade Range. It is considered an active volcano, but no major eruptive events have been catalogued since systematic record keeping began in the 1820s.

"Do we need to bring a sleeping bag, or will the volcano keep us warm at night?"

What you can do