From Wikipedia
https://en.wikipedia.org/wiki/Portal:Uzbekistan
Wikipedia portal for content related to Uzbekistan

What is now Uzbekistan was in ancient times part of the Iranian-speaking region of Transoxiana and Turan. The first recorded settlers were Eastern Iranian nomads, known as Scythians, who founded kingdoms in Khwarazm (8th–6th centuries BC), Bactria (8th–6th centuries BC), Sogdia (8th–6th centuries BC), Fergana (3rd century BC – 6th century AD), and Margiana (3rd century BC – 6th century AD). The area was incorporated into the Iranian Achaemenid Empire and, after a period of Macedonian rule, was ruled by the Iranian Parthian Empire and later by the Sasanian Empire, until the Muslim conquest of Persia in the seventh century. The Early Muslim conquests converted most of the people, including the local ruling classes, into adherents of Islam. During this period, cities such as Samarkand, Khiva, and Bukhara began to grow rich from the Silk Road, and witnessed the emergence of leading figures of the Islamic Golden Age, including Muhammad al-Bukhari, Al-Tirmidhi, Ismail Samani, al-Biruni, and Avicenna. The local Khwarazmian dynasty, and Central Asia as a whole were decimated by the Mongol invasion in the 13th century, after which the region became dominated by Turkic peoples. The city of Shahrisabz was the birthplace of the Turco-Mongol conqueror Timur (Tamerlane), who in the 14th century established the Timurid Empire and was proclaimed the Supreme Emir of Turan with his capital in Samarkand, which became a centre of science under the rule of Ulugh Beg, giving birth to the Timurid Renaissance. The territories of the Timurid dynasty were conquered by Uzbek Shaybanids in the 16th century, moving the centre of power to Bukhara. The region was split into three states: the Khanate of Khiva, Khanate of Kokand and Emirate of Bukhara. Conquests by Emperor Babur towards the east led to the foundation of India's newest invasions as Mughal Empire. All of Central Asia, was gradually incorporated into the Russian Empire during the 19th century, with Tashkent becoming the political center of Russian Turkestan. In 1924, national delimitation created the Uzbek Soviet Socialist Republic as an independent republic within the Soviet Union. Following the dissolution of the Soviet Union, it declared independence as the Republic of Uzbekistan on 31 August 1991. ( Full article...)

Itchan Kala ( Uzbek: Ichan Qalʼa) is the walled inner town of the city of Xiva, Uzbekistan. Since 1990, it has been protected as the World Heritage Site. The old town retains more than 50 historic monuments and 250 old houses, dating primarily from the eighteenth or nineteenth centuries. Djuma Mosque, for instance, was established in the tenth century and rebuilt from 1788 to 1789, although its celebrated hypostyle hall still retains 112 columns taken from ancient structures.

Rustam Qosimjonov is an Uzbek chess Grandmaster and FIDE World Chess Champion. He was born on December 5, 1979 in Tashkent, Uzbek SSR. His best results include first in the 1998 Asian Championship, second in the World Junior Chess Championship in 1999, first at Essen 2001, first at Pamplona 2002 (winning a blitz playoff against Victor Bologan after both had finished the main tournament on 3.5/6), first with 8/9 at the Vlissingen Open 2003, joint first with Liviu Dieter Nisipeanu with 6/9 at Pune 2005, a bronze-medal winning 9.5/12 performance on board one for his country at the 2000 Chess Olympiad and runner-up in the FIDE Chess World Cup in 2002 (losing to Viswanathan Anand in the final). Qosimjonov won FIDE World Chess Championship 2004. 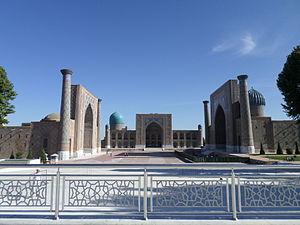 –When a task is completed, please remove it from the list.