From Wikipedia
https://en.wikipedia.org/wiki/Portal:University_of_Oxford
Wikipedia portal for content related to the University of Oxford

The University of Oxford portal 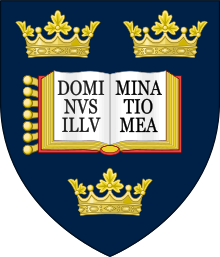 The university is made up of thirty-nine semi-autonomous constituent colleges, six permanent private halls, and a range of academic departments which are organised into four divisions. All the colleges are self-governing institutions within the university, each controlling its own membership and with its own internal structure and activities. All students are members of a college. It does not have a main campus, and its buildings and facilities are scattered throughout the city centre. Undergraduate teaching at Oxford consists of lectures, small-group tutorials at the colleges and halls, seminars, laboratory work and occasionally further tutorials provided by the central university faculties and departments. Postgraduate teaching is provided predominantly centrally.

Oxford operates the world's oldest university museum, as well as the largest university press in the world and the largest academic library system nationwide. In the fiscal year ending 31 July 2019, the university had a total income of £2.45 billion, of which £624.8 million was from research grants and contracts.

Oxford has educated a wide range of notable alumni, including 28 prime ministers of the United Kingdom and many heads of state and government around the world. As of October 2020, 72 Nobel Prize laureates, 3 Fields Medalists, and 6 Turing Award winners have studied, worked, or held visiting fellowships at the University of Oxford, while its alumni have won 160 Olympic medals. Oxford is the home of numerous scholarships, including the Rhodes Scholarship, one of the oldest international graduate scholarship programmes. ( Full article...)

Bodley's Librarian is the head of the Bodleian Library, the main library at the University of Oxford. Both are named after the founder, Sir Thomas Bodley (pictured). The university's library was established in about 1320 but had declined by the end of the 16th century, so in 1598 Bodley offered to restore it. The first librarian, Thomas James, was selected in 1599, and the Bodleian opened in 1602. Bodley wanted the librarian to be diligent, a linguist, unmarried, and not a parish priest, although James persuaded him to dispense with the last two requirements. In all, 25 people have served as Bodley's Librarian, some less well than others: John Price (who held the post from 1768 to 1813) was accused of "a regular and constant neglect of his duty". The first woman, and the first foreign librarian, to run the Bodleian was Sarah Thomas (2007–13). The current librarian is Richard Ovenden. ( Full article...)

Sir Matthew Hale (1609–1676) was an influential English barrister, judge and jurist most noted for his treatise Historia Placitorum Coronæ. He studied at Magdalen Hall, Oxford and became a barrister, representing various Royalist figures during the English Civil War. His reputation for integrity saved him from repercussions under the Commonwealth of England and Oliver Cromwell made him a Justice of the Common Pleas. He was noted for his resistance to bribery and his willingness to make politically unpopular decisions which upheld the law. When Charles II was reinstated, Hale was made Chief Baron of the Exchequer and then Chief Justice of the King's Bench. In both positions, he was again noted for his integrity, although not as particularly innovative. Hale is almost universally appreciated as an excellent judge and jurist, with his central legacy coming through his written work, published after his death. His Analysis of the Common Law is the first published history of English law and a strong influence on William Blackstone's Commentaries on the Laws of England, whilst his jurisprudence struck a middle-ground between Edward Coke's "appeal to reason" and John Selden's "appeal to contract", while refuting elements of Thomas Hobbes's theory of natural law. His thoughts on marital rape, expressed in the Historia, continued in English law until 1991, and he was cited in court as recently as 1993. ( more...)
More biographies
edit

Blackfriars Hall, established in 1994, is one of the Permanent Private Halls (PPHs) of the University of Oxford. Unlike the colleges, which are run by their Fellows, PPHs are run by an outside institution – in the case of Blackfriars Hall, the English Province of the Dominican friars. The hall is on the same site as the Priory of the Holy Spirit (the friars' religious house) and Blackfriars Studium, the Province's centre of theological studies. Dominicans arrived in Oxford in 1221 at the instruction of Saint Dominic himself, little more than a week after the friar's death. Like all the monastic houses in Oxford, Blackfriars came into conflict with the university authorities, and all of them were suppressed during the Reformation. Blackfriars was refounded in 1921 on St Giles', within 600 metres of the original site. One of the smaller academic communities in Oxford, it admits men and women (over the age of 21) of any faith for undergraduate degrees in theology, philosophy, and PPE and for postgraduate degrees. Former students include Anthony Fisher OP, Roman Catholic Archbishop of Sydney; Malcolm McMahon OP, Archbishop of Liverpool; and the American journalist Delia Gallagher. ( Full article...)

A men's crew from Keble College training for Eights Week (the main inter-college rowing races). Rowing is a popular student sport at Oxford, even though most students will not have rowed before starting at Oxford.
More pictures
edit

Articles from Wikipedia's " Did You Know" archives about the university and people associated with it:

As dawn breaks, those attending the 2010 Ball at The Queen's College celebrate the end of another Oxford year.
More panoramas