An instructor checks the instrument display of a rebreather during training

Underwater diving can be described as all of the following:

The scope of this portal includes the technology supporting diving activities, the physiological and medical aspects of diving, the skills and procedures of diving and the training and registration of divers, underwater activities which are to some degree dependent on diving, economical, commercial, safety, and legal aspects of diving, biographical information on notable divers, inventors and manufacturers of diving related equipment and researchers into aspects of diving. 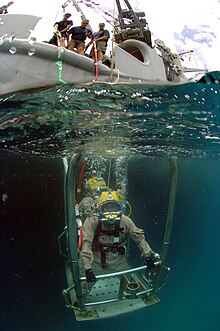 Surface-supplied divers riding a stage to the underwater workplace

Underwater diving, as a human activity, is the practice of descending below the water's surface to interact with the environment. Immersion in water and exposure to high ambient pressure have physiological effects that limit the depths and duration possible in ambient pressure diving. Humans are not physiologically and anatomically well adapted to the environmental conditions of diving, and various equipment has been developed to extend the depth and duration of human dives, and allow different types of work to be done.

In ambient pressure diving, the diver is directly exposed to the pressure of the surrounding water. The ambient pressure diver may dive on breath-hold, or use breathing apparatus for scuba diving or surface-supplied diving, and the saturation diving technique reduces the risk of decompression sickness (DCS) after long-duration deep dives. Atmospheric diving suits (ADS) may be used to isolate the diver from high ambient pressure. Crewed submersibles can extend depth range, and remotely controlled or robotic machines can reduce risk to humans.

The environment exposes the diver to a wide range of hazards, and though the risks are largely controlled by appropriate diving skills, training, types of equipment and breathing gases used depending on the mode, depth and purpose of diving, it remains a relatively dangerous activity. Professional diving is usually regulated by occupational health and safety legislation, while recreational diving may be entirely unregulated. Diving activities are restricted to maximum depths of about 40 metres (130 ft) for recreational scuba diving, 530 metres (1,740 ft) for commercial saturation diving, and 610 metres (2,000 ft) wearing atmospheric suits. Diving is also restricted to conditions which are not excessively hazardous, though the level of risk acceptable can vary.

Recreational diving (sometimes called sport diving or subaquatics) is a popular leisure activity. Technical diving is a form of recreational diving under especially challenging conditions. Professional diving (commercial diving, diving for research purposes, or for financial gain) involves working underwater. Public safety diving is the underwater work done by law enforcement, fire rescue, and underwater search and recovery dive teams. Military diving includes combat diving, clearance diving and ships husbandry. Deep sea diving is underwater diving, usually with surface-supplied equipment, and often refers to the use of standard diving dress with the traditional copper helmet. Hard hat diving is any form of diving with a helmet, including the standard copper helmet, and other forms of free-flow and lightweight demand helmets. The history of breath-hold diving goes back at least to classical times, and there is evidence of prehistoric hunting and gathering of seafoods that may have involved underwater swimming. Technical advances allowing the provision of breathing gas to a diver underwater at ambient pressure are recent, and self-contained breathing systems developed at an accelerated rate following the Second World War. ( Full article...)

How to use this portal
Refresh with new selections below (purge)

Index to diving and support equipment

Index to the science of underwater diving

Index to underwater tools and weapons

Index to the history of underwater diving

► Underwater diving
What are categories?