From Wikipedia
https://en.wikipedia.org/wiki/Portal:Ukraine
Wikipedia portal for content related to Ukraine

listen)) is a country in Eastern Europe. It is the second-largest country in Europe after Russia, which it borders to the east and north-east. Ukraine also shares borders with Belarus to the north; Poland, Slovakia, and Hungary to the west; Romania and Moldova to the south; and has a coastline along the Sea of Azov and the Black Sea. It covers an area of 603,628 km2 (233,062 sq mi), with a population of about 41.5 million, and is the eighth-most populous country in Europe. The country's capital and largest city is Kyiv.

The territory of modern Ukraine has been inhabited since 32,000 BC. During the Middle Ages, the area was a key centre of East Slavic culture, with the powerful state of Kievan Rus' forming the basis of Ukrainian identity. Following its fragmentation in the 13th century, the territory was contested, ruled, and divided by a variety of powers, including the Polish–Lithuanian Commonwealth, Austria-Hungary, the Ottoman Empire, and Russia. A Cossack republic emerged and prospered during the 17th and 18th centuries, but its territory was eventually split between Poland and the Russian Empire. In the aftermath of the Russian Revolution, a Ukrainian national movement for self-determination emerged, and the internationally recognized Ukrainian People's Republic was declared on 23 June 1917. After World War II, the western part of Ukraine merged into the Ukrainian Soviet Socialist Republic, and the whole country became a part of the Soviet Union. Ukraine gained its independence in 1991, following the dissolution of the Soviet Union. ( Full article...)

The T-34 is a Soviet medium tank produced from 1940 to 1958. It was the world's best tank when the Soviet Union entered the Second World War, and is credited as the war's most effective, efficient and influential design. First produced in 1940, at the KhPZ factory in Kharkov (now Kharkiv, Ukraine), it was the mainstay of Soviet armoured forces throughout World War II, and widely exported afterwards. It was the most-produced tank of the war, and the second most-produced tank of all time, after its successor, the T-54/55 series. The T-34 was still in service with twenty-seven countries as late as 1996. 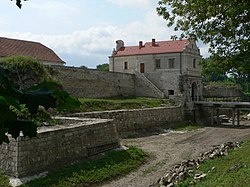 Zbarazh ( Ukrainian: Збараж, Polish: Zbaraż, Yiddish: Zbarj) is a small city in the Ternopil Oblast ( province) of western Ukraine. It is the administrative center of the Zbarazh Raion ( district), and is located in the historic region of Galicia. The major attraction of the city is the Zbarazh Castle that played a key role during the Khmelnytsky Uprising, the heroic defense of which eventually led to change of momentum and extinguishing the Cossack revolt.

Featured at Did you know section at the Wikipedia's Main Page 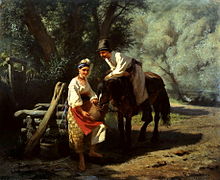 Konstiantyn Trutovsky was a Ukrainian realist painter and graphic artist. His artistic heritage includes numerous genre screens on Ukrainian themes. Trutovsky was interested in ethnography and depicted colorful Ukrainian folk customs, not shying away from "a dash of good humour".

If you just came here for the first time, please read this and be bold... but timid.