From Wikipedia
https://en.wikipedia.org/wiki/Portal:Toys
Wikipedia portal for content related to Toys 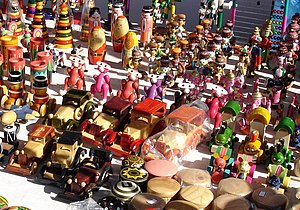 A variety of traditional wooden Channapatna toys from India

A toy is an item that is used in play, especially one designed for such use. It is mainly intended for use by children, though may also be marketed to adults under certain circumstances. Playing with toys can be an enjoyable means of training young children for life in society. Different materials like wood, clay, paper, and plastic are used to make toys. Many items are designed to serve as toys, but goods produced for other purposes can also be used. For instance, a small child may fold an ordinary piece of paper into an airplane shape and "fly it". Newer forms of toys include interactive digital entertainment. Some toys are produced primarily as collectors' items and are intended for display only.

The origin of toys is prehistoric; dolls representing infants, animals, and soldiers, as well as representations of tools used by adults are readily found at archaeological sites. The origin of the word "toy" is unknown, but it is believed that it was first used in the 14th century. Toys are mainly made for children. The oldest known doll toy is thought to be 4,000 years old. ( Full article...)

Pokémon is a media franchise published and owned by Japanese video game company Nintendo and created by Satoshi Tajiri in 1996. Originally released as a pair of interlinkable Game Boy role-playing video games developed by Game Freak, Pokémon has since become the second-most successful and lucrative video game-based media franchise in the world, behind only Nintendo's own Mario franchise. Pokémon properties have since been merchandised into anime, manga, trading cards, toys, books, and other media. Pokémon USA Inc. (now The Pokémon Company International), a subsidiary of Japan's Pokémon Co., now oversees all Pokémon licensing outside of Asia. The name Pokémon is the romanized contraction of the Japanese brand Pocket Monsters, as such contractions are quite common in Japan. "Pokémon" is identical in both the singular and plural, as is each individual species name; it is grammatically correct to say "one Pokémon" and "many Pokémon", as well as "one Pikachu" and "many Pikachu".

Herman Guy Fisher (November 2, 1898 – September 26, 1975), was born in Unionville Pennsylvania. He is best known as the co-founder of the famous toy brand Fisher-Price. He graduated from the Pennsylvania State University in 1921 with a BA in Commerce and Finance.