From Wikipedia
https://en.wikipedia.org/wiki/Portal:Surrey
Wikipedia portal for content related to Surrey

Surrey is a relatively affluent county. It has the highest proportion of woodland of counties in England. It has four horse racing courses, and golf courses including the international competition venue at Wentworth. ( Full article...) 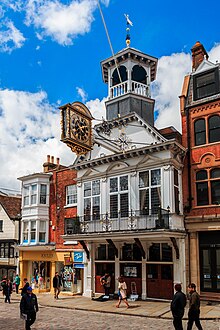 listen)) is a town in Surrey, England. It lies 28 miles (45 km) southwest of London on the A3 trunk road between the capital and Portsmouth. As of the 2011 census, the town has a population of about 80,000 and is the seat of the wider Borough of Guildford which had an estimated 147,889 inhabitants in 2018.

Guildford has Saxon roots and historians attribute its location to the existence of a gap in the North Downs where the River Wey was forded by the Harrow Way. By AD 978 it was home to an early English Royal Mint. The building of the Wey Navigation and the Basingstoke Canal in the 17th and 18th centuries, respectively, connected Guildford to a network of waterways that aided its prosperity. In the 20th century, the University of Surrey and the Anglican Guildford Cathedral were added.

Due to recent development running north from Guildford, and linking to the Woking area, Guildford now officially forms the southwestern tip of the Greater London Built-up Area, as defined by the Office for National Statistics. ( Full article...) 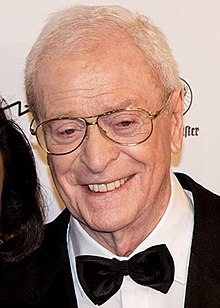 Sir Michael Caine CBE (born Maurice Joseph Micklewhite Jr., 14 March 1933) is an English actor. Known for his distinctive South London accent, he has appeared in more than 130 films during a career spanning over 60 years, and is considered a British film icon. As of February 2017, the films in which he has appeared have grossed over $7.8 billion worldwide. He is ranked at No. 20 on the list of highest-grossing box office stars.

Caine is also known for his performance as Ebenezer Scrooge in The Muppet Christmas Carol (1992), and for his comedic roles in Dirty Rotten Scoundrels (1988), Miss Congeniality (2000), Austin Powers in Goldmember (2002), and Secondhand Lions (2003). He received his second Golden Globe Award for Little Voice (1998). In 1999, he received his second Academy Award for Best Supporting Actor for his performance as a sympathetic doctor in The Cider House Rules. In 2002 he received acclaim as a conflicted British journalist in Vietnam in The Quiet American (2002) earning his sixth Academy Award nomination. In 2006 he appeared in Alfonso Cuaron's dystopian drama film Children of Men (2006). Caine gained worldwide popularity for his portrayal of Alfred Pennyworth in Christopher Nolan's The Dark Knight Trilogy (2005–2012). He appeared in several other of Nolan's films, including The Prestige (2006), Inception (2010), Interstellar (2014), and Tenet (2020). He also appeared in the heist thriller film Now You See Me (2013), and the action comedy film Kingsman: The Secret Service (2014), and the Italian drama Youth (2015) which premiered at the Cannes Film Festival.

Alongside Laurence Olivier, Paul Newman, and Jack Nicholson, Caine is one of only four male actors to be nominated for an Academy Award for acting in five decades. Caine has appeared in seven films that featured in the British Film Institute's 100 greatest British films of the 20th century. In 2000, he received a BAFTA Fellowship and was knighted by Queen Elizabeth II in recognition of his contribution to cinema. ( Full article...)

–When a task is completed, please remove it from the list.