Founded in June 1985, Studio Ghibli is headed by the directors Hayao Miyazaki and Isao Takahata and the producer Toshio Suzuki. Prior to the formation of the studio, Miyazaki and Takahata had already had long careers in Japanese film and television animation and had worked together on Hols: Prince of the Sun and Panda! Go, Panda!; and Suzuki was an editor at Tokuma Shoten's Animage magazine.

The studio was founded after the success of the 1984 film Nausicaä of the Valley of the Wind, written and directed by Miyazaki for Topcraft and distributed by Toei Company. The origins of the film lie in the first two volumes of a serialized manga written by Miyazaki for publication in Animage as a way of generating interest in an anime version. Suzuki was part of the production team on the film and founded Studio Ghibli with Miyazaki, who also invited Takahata to join the new studio.

The studio has mainly produced films by Miyazaki, with the second most prolific director being Takahata (most notably with Grave of the Fireflies). Other directors who have worked with Studio Ghibli include Yoshifumi Kondo, Hiroyuki Morita, Gorō Miyazaki, and Hiromasa Yonebayashi. Composer Joe Hisaishi has provided the soundtracks for most of Miyazaki's Studio Ghibli films. In their book Anime Classics Zettai!, Brian Camp and Julie Davis made note of Michiyo Yasuda as "a mainstay of Studio Ghibli’s extraordinary design and production team".

Jump to a specific section below

Tomomi Mochizuki (望月 智充, Mochizuki Tomomi, born December 31, 1958 in Hokkaidō, Japan), sometimes incorrectly romanized as Tomomichi Mochizuki, is an anime director and producer. He is married to animator Masako Gotō and sometimes uses the alias Gō Sakamoto (坂本 郷, Sakamoto Gō) when writing screenplays or working on storyboards. Known from the early 1990s as director of Ranma ½, Kimagure Orange Road and the Studio Ghibli TV movie Umi ga Kikoeru, he is also known for having directed Twin Spica, Zettai Shounen, the acclaimed World Masterpiece Theater series Porphy no Nagai Tabi, and most recently as director of the 2010 noitaminA series House of Five Leaves.

While attending Waseda University, he joined the Waseda University Animation Association. In 1981, he began working for Ajia-do Animation Works. Mochizuki made his debut one year later when he acted as production director of the 1982 series Tokimeki Tonight. He went on to direct several of the magical girl series, including Magical Angel Creamy Mami. In 1986, he moved up to chief director with Hikari no Densetsu. He currently divides his time between directing, writing scripts and acting as a series coordinator for various shows.

Ocean Waves, also known as I Can Hear the Sea (海がきこえる, Umi ga Kikoeru), is a 1993 Japanese anime television film produced by Studio Ghibli. It was directed by Tomomi Mochizuki and written by Kaori Nakamura based on the novel of the same title by Saeko Himuro. The TV special first aired on May 5, 1993 on Japanese TV. The film was an attempt by Studio Ghibli to allow their younger staff members to make a film reasonably cheaply. However, it ended up going both over budget and over schedule.The story is set in the city of Kōchi, on the Japanese island of Shikoku. It concerns a love triangle that develops between two good friends and a new girl who transfers to their high school from Tokyo.

At Kichijōji Station in Tokyo, Taku Morisaki glimpses a familiar woman on the platform opposite. Later, her photo falls from a shelf as he exits his apartment before flying to Kōchi Prefecture. As the plane takes off, he narrates the events that brought her into his life. The story is told in flashback.

In Kōchi, two years prior, Taku is working in a restaurant, where he receives a call from his friend, Yutaka Matsuno, asking to meet at their high school. He finds Yutaka at a window, looking at an attractive girl. She is a transfer student from Tokyo whom Yutaka was asked to show around. Taku's interest piqued, he tries unsuccessfully to view her. The boys discuss their upcoming school trip to Hawaii. Taku meets Yutaka at the school gates, where he is introduced to the new girl, Rikako Muto. She smiles, and thanks Yutaka for his help. He explains that she was asking for directions to a bookstore. Walking home, Taku teases him about his infatuation.

Rikako proves to be gifted academically and at sports, but also arrogant. Taku believes she is unhappy at having to leave Tokyo. His mother learns from gossip that a divorce brought Rikako's mother to Kōchi. In a later phone conversation with Yutaka, he also discovers that Rikako is living alone, away from the family house.

Ghost in the Shell 2: Innocence, known simply as Innocence (イノセンス, Inosensu) in Japan, is a 2004 anime/ computer-animated sci-fi sequel to the 1995 film Ghost in the Shell. Released in Japan on March 6, 2004, and in the US on September 17, 2004, Innocence had a production budget of approximately $20 million (approx. 2 billion yen). To raise the sum, Production I.G studio's president, Mitsuhisa Ishikawa, asked Studio Ghibli's president, Toshio Suzuki, to co-produce. It is the only Disney/Studio Ghibli film to be animated and produced by Production I.G.

With a story loosely connected to the manga by Shirow Masamune, the film was written and directed by Ghost in the Shell director Mamoru Oshii. The film was honored best sci-fi film at the 2004 Nihon SF Taisho Awards and was in competition at the 2004 Cannes Film Festival. The soundtrack for the film was released under the name Innocence O.S.T. and a related novel called Innocence: After the Long Goodbye was released on February 29, 2004. This film makes many allusions and references to other famous works, such as The Future Eve. The foreign DVD release of the film faced many issue ranging from licensing to audio. 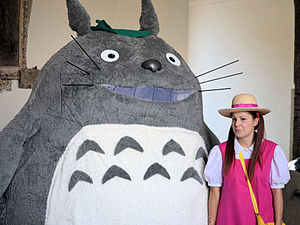 Totoro and Mei cosplayers at Lucca Comics & Games in 2013.

Things you can do...

Here are ideas for how you can help improve the coverage of Studio Ghibli topics on Wikipedia:

Join a WikiProject or task force:

Note: If no articles are shown below, please work on those found in the Archive. This list was generated from these rules. Questions and feedback are always welcome! The search is being run daily with the most recent ~14 days of results. Note: Some articles may not be relevant to this project.

Note: The list display can now be customized by each user. See List display personalization for details.

How to write a new article
edit