Athletics is a group of sporting events that involves competitive running, jumping, throwing, and walking. The most common types of athletics competitions are track and field, road running, cross country running, and racewalking.

The results of racing events are decided by finishing position (or time, where measured), while the jumps and throws are won by the athlete that achieves the highest or furthest measurement from a series of attempts. The simplicity of the competitions, and the lack of a need for expensive equipment, makes athletics one of the most common types of sports in the world. Athletics is mostly an individual sport, with the exception of relay races and competitions which combine athletes' performances for a team score, such as cross country.

Organized athletics are traced back to the Ancient Olympic Games from 776 BC. The rules and format of the modern events in athletics were defined in Western Europe and North America in the 19th and early 20th century, and were then spread to other parts of the world. Most modern top level meetings are held under the auspices of World Athletics, the global governing body for the sport of athletics, or its member continental and national federations.

The word athletics is derived from the Ancient Greek ἀθλητής (athlētēs, "combatant in public games") from ἆθλον (athlon, "prize") or ἆθλος (athlos, "competition"). Initially, the term described athletic contests in general – i.e. sporting competition based primarily on human physical feats. In the 19th century, the term athletics acquired a more narrow definition in Europe and came to describe sports involving competitive running, walking, jumping and throwing. This definition continues to be prominent in the United Kingdom and the former British Empire. Related words in Germanic and Romance languages also have a similar meaning.

In much of North America, athletics is synonymous with sports in general, maintaining the historical usage of the term. The word "athletics" is rarely used to refer to the sport of athletics in this region. Track and field is preferred, and is used in the United States and Canada to refer to athletics events, including racewalking and marathon running (although cross country running is typically considered a separate sport). ( Full article...)

It's from the first edition ( 1896 Summer Olympics), that Athletics has been considered the "Queen" of the Olympics. Since then there have been a series of competitions organized at world level, than at the continental level. Furthermore, the Athletics is the main sport of nearly all multi-sport events such as Universiade, Mediterranean Games or Pan American Games. The following list refers to the main Athletics competitions that take place in the world.

Carl Lewis and Jackie Joyner-Kersee are the US athletes with most medals at the Olympics, respectively in the men's and women's.

The USA has participated in 25 Olympic Games, missing only the 1980 Summer Olympics in Moscow because of a boycott following the USSR invasion of Afghanistan.

Sara Simeoni (born April 19, 1953) is an Italian former high jumper, who won a gold medal at the 1980 Summer Olympics and twice set a world record in the women's high jump.

Sara Simeoni was born in Rivoli Veronese, in the province of Verona. She soon took up athletics, specialising in the high jump. Her first international result was at the 1971 European Championships in Helsinki, where she ended 9th with a 178 cm jump. Her first international success was at the 1976 in Montreal, where she won a silver medal, with a personal best of 1.91 m, and was beaten only by Rosemarie Ackermann's 1.93 m leap.

In August 1978, she set the new world record with 2.01 m in Brescia (this jump stood as a national record until Antonietta Di Martino jumped 2.02 in June 2007). Later in the same month she equalled it at Prague while winning the European title. In 1980, Simeoni set a new Olympic record of 1.97 m, when winning gold in Moscow.

Simeoni struggled to regain her form in the following years, with a series of tendon injuries. At 1984 Olympics, Simeoni carried the Italian flag at the opening ceremony in Los Angeles. Here, she cemented her reputation as one of the greatest female high jumpers ever, in a thrilling duel with German Ulrike Meyfarth. Simeoni managed to reach the 2 meters measure for the first time since 1978. The ageing Meyfarth, however, replied with a notable 2.02 m jump, and Simeoni won a silver medal.

More about... List of world records in athletics
edit 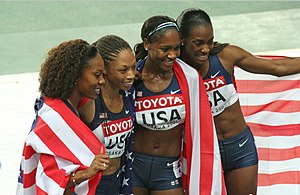 Events in the sport of athletics