Members of the Academy in 1667 with Louis XIV

Science (from Latin scientia 'knowledge') is a systematic enterprise that builds and organizes knowledge in the form of testable explanations and predictions about the world.

The earliest roots of science can be traced to Ancient Egypt and Mesopotamia in around 3000 to 1200 BCE. Their contributions to mathematics, astronomy, and medicine entered and shaped Greek natural philosophy of classical antiquity, whereby formal attempts were made to provide explanations of events in the physical world based on natural causes. After the fall of the Western Roman Empire, knowledge of Greek conceptions of the world deteriorated in Western Europe during the early centuries (400 to 1000 CE) of the Middle Ages, but was preserved in the Muslim world during the Islamic Golden Age. The recovery and assimilation of Greek works and Islamic inquiries into Western Europe from the 10th to 13th century revived " natural philosophy", which was later transformed by the Scientific Revolution that began in the 16th century as new ideas and discoveries departed from previous Greek conceptions and traditions. The scientific method soon played a greater role in knowledge creation and it was not until the 19th century that many of the institutional and professional features of science began to take shape; along with the changing of "natural philosophy" to "natural science."

Modern science is typically divided into three major branches that consist of the natural sciences (e.g., biology, chemistry, and physics), which study nature in the broadest sense; the social sciences (e.g., economics, psychology, and sociology), which study individuals and societies; and the formal sciences (e.g., logic, mathematics, and theoretical computer science), which deal with symbols governed by rules. There is disagreement, however, on whether the formal sciences actually constitute a science as they do not rely on empirical evidence. Disciplines that use existing scientific knowledge for practical purposes, such as engineering and medicine, are described as applied sciences.

New knowledge in science is advanced by research from scientists who are motivated by curiosity about the world and a desire to solve problems. Contemporary scientific research is highly collaborative and is usually done by teams in academic and research institutions, government agencies, and companies. The practical impact of their work has led to the emergence of science policies that seek to influence the scientific enterprise by prioritizing the development of commercial products, armaments, health care, public infrastructure, and environmental protection. ( Full article...)

Featured articles are displayed here, which represent some of the best content on English Wikipedia.
edit 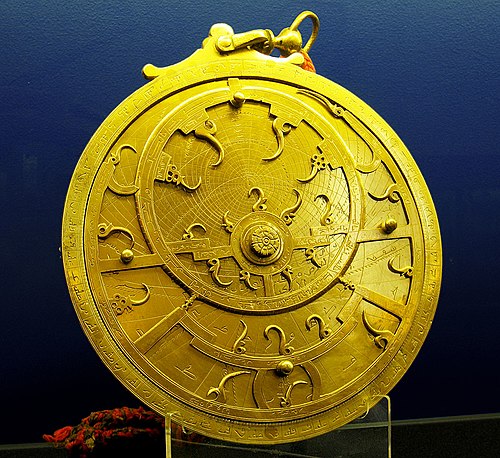 Astrolabe
Credit:  Andrew Dunn
An 18th Century Persian astrolabe used for determining the time at both day and night. The points of the curved spikes on the front rete plate mark the positions of the brightest stars, the name of each star being labeled at the base of each spike. The back plate, or mater, is engraved with projected coordinate lines. From the Whipple Museum of the History of Science collection.
edit

Meinhard Michael Moser (13 March 1924 – 30 September 2002) was an Austrian mycologist. His work principally concerned the taxonomy, chemistry, and toxicity of the gilled mushrooms ( Agaricales), especially those of the genus Cortinarius, and the ecology of ectomycorrhizal relationships. His contributions to the Kleine Kryptogamenflora von Mitteleuropa series of mycological guidebooks were well regarded and widely used. In particular, his 1953 Blätter- und Bauchpilze (Agaricales und Gastromycetes) [The Gilled and Gasteroid Fungi (Agaricales and Gastromycetes)], which became known as simply "Moser", saw several editions in both the original German and in translation. Other important works included a 1960 monograph on the genus Phlegmacium (now considered part of Cortinarius) and a 1975 study of members of Cortinarius, Dermocybe, and Stephanopus in South America, co-authored with the mycologist Egon Horak.
edit

See the portal's Topics and categories page for a comprehensive overview.
edit

23 October 2021 – Discoveries of exoplanets
Scientists at the University of Hawaiʻi at Mānoa announce the discovery of 2M0437b, one of the youngest exoplanets ever found at a distant star. The exoplanet was discovered using the Subaru Telescope at the observatory on Mauna Kea. (SciTech)
20 October 2021 – Xenotransplantation
Researchers at NYU Langone Health in New York City announce that a team of surgeons last month, led by Dr. Robert Montgomery, successfully attached a genetically-modified pig kidney to a brain dead patient for two days without rejection. (NPR)
12 October 2021 – Discoveries of exoplanets
NASA astronomers announce the discovery of TIC 257060897b, a Hot Jupiter exoplanet that is 50% larger and 30% less massive than Jupiter. The discovery was made using the Transiting Exoplanet Survey Satellite. (Science Times)
9 October 2021 – COVID-19 pandemic
A study conducted by researchers from the University of Queensland concludes that the COVID-19 pandemic led to a significant increase in diagnoses of generalized anxiety disorder and major depressive disorder worldwide in 2020. (The Guardian)
6 October 2021 –
Chemists Benjamin List of Germany and David MacMillan of the United States are awarded the 2021 Nobel Prize in Chemistry for their work on molecular engineering through organocatalysis. (AFP via Gulf News)
5 October 2021 –
Climatologists Syukuro Manabe and Klaus Hasselmann and theoretical physicist Giorgio Parisi are awarded the 2021 Nobel Prize in Physics for their work towards the understanding of physical systems through climate models. (AFP via NDTV)

The following are images from various science-related articles on Wikipedia.