Rock music is a broad genre of popular music that originated as " rock and roll" in the United States in the late 1940s and early 1950s, developing into a range of different styles in the mid-1960s and later, particularly in the United States and the United Kingdom.[ page needed] It has its roots in 1940s and 1950s rock and roll, a style that drew directly from the blues and rhythm and blues genres of African-American music and from country music. Rock music also drew strongly from a number of other genres such as electric blues and folk, and incorporated influences from jazz, classical, and other musical styles. For instrumentation, rock has centered on the electric guitar, usually as part of a rock group with electric bass, drums, and one or more singers. Usually, rock is song-based music with a 4
4
time signature using a verse–chorus form, but the genre has become extremely diverse. Like pop music, lyrics often stress romantic love but also address a wide variety of other themes that are frequently social or political.

Rock musicians in the mid-1960s began to advance the album ahead of the single as the dominant form of recorded music expression and consumption, with the Beatles at the forefront of this development. Their contributions lent the genre a cultural legitimacy in the mainstream and initiated a rock-informed album era in the music industry for the next several decades. By the late 1960s " classic rock" period, a number of distinct rock music subgenres had emerged, including hybrids like blues rock, folk rock, country rock, southern rock, raga rock, and jazz rock, many of which contributed to the development of psychedelic rock, which was influenced by the countercultural psychedelic and hippie scene. New genres that emerged included progressive rock, which extended the artistic elements, glam rock, which highlighted showmanship and visual style, and the diverse and enduring subgenre of heavy metal, which emphasized volume, power, and speed. In the second half of the 1970s, punk rock reacted by producing stripped-down, energetic social and political critiques. Punk was an influence in the 1980s on new wave, post-punk and eventually alternative rock.

From the 1990s, alternative rock began to dominate rock music and break into the mainstream in the form of grunge, Britpop, and indie rock. Further fusion subgenres have since emerged, including pop punk, electronic rock, rap rock, and rap metal, as well as conscious attempts to revisit rock's history, including the garage rock/ post-punk and techno-pop revivals in the early 2000s. The late 2000s and 2010s saw a slow decline in rock music's mainstream popularity and cultural relevancy, with hip hop surpassing it as the most popular genre in the United States.

Rock music has also embodied and served as the vehicle for cultural and social movements, leading to major subcultures including mods and rockers in the United Kingdom and the hippie counterculture that spread out from San Francisco in the US in the 1960s. Similarly, 1970s punk culture spawned the goth, punk, and emo subcultures. Inheriting the folk tradition of the protest song, rock music has been associated with political activism as well as changes in social attitudes to race, sex, and drug use, and is often seen as an expression of youth revolt against adult consumerism and conformity. At the same time, it has been commercially highly successful, leading to charges of selling out. ( Full article...)

Arctic Monkeys were heralded as one of the first bands to come to public attention via the Internet, with commentators suggesting they represented the possibility of a change in the way in which new bands are promoted and marketed. Their debut album, Whatever People Say I Am, That's What I'm Not (2006), became the fastest selling debut album in UK chart history, and has been hailed as one of the greatest debut albums. It won Best British Album at the 2007 Brit Awards. The band's second album, Favourite Worst Nightmare (2007), was also acclaimed by critics and won Best British Album at the 2008 BRIT Awards. They went on to release Humbug (2009) and Suck It and See (2011).

The band's global recognition increased with their critically acclaimed fifth album AM (2013), which was supported by the global hit " Do I Wanna Know?". It topped four Billboard charts and was certified platinum in the US. At the 2014 BRIT Awards, the album became their third to win British Album of the Year. Their sixth album, Tranquility Base Hotel & Casino (2018), was a major departure from the band's previous guitar-heavy work, instead being piano-orientated. It received a Best Alternative Music Album nomination at the 2019 Grammy Awards, their second to do so after Whatever People Say I Am, That's What I'm Not.

As of 2021, Arctic Monkeys has sold over 20 million records worldwide. In the United Kingdom, the band became the first independent-label band to debut at number one in the UK with their first six albums. The band have won seven Brit Awards; winning Best British Group and British Album of the Year three times; a Mercury Prize for Whatever People Say I Am, That's What I'm Not, an Ivor Novello Award, and 20 NME Awards. In addition, they have been nominated for five Grammy Awards, and received Mercury Prize nominations in 2007, 2013, and 2018. Both Whatever People Say I Am, That's What I'm Not and AM are included in NME's and different editions of Rolling Stone's 500 Greatest Albums of All Time lists. ( Full article...) 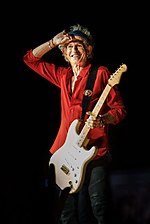 Keith Richards (born 18 December 1943), often referred to during the 1960s and 1970s as Keith Richard, is an English musician, singer, and songwriter. He is best known as the co-founder, guitarist, secondary vocalist, and co-principal songwriter of the Rolling Stones. Rolling Stone magazine called Richards the creator of "rock's greatest single body of riffs" on guitar and ranked him fourth on its list of 100 best guitarists in 2011. The magazine lists fourteen songs that Richards wrote with the Rolling Stones' lead vocalist Mick Jagger on its " Rolling Stone's 500 Greatest Songs of All Time" list.

Richards plays both lead and rhythm guitar parts, often in the same song; the Stones are generally known for their guitar interplay of rhythm and lead ("weaving") between him and the other guitarist in the band – Brian Jones (1962–1969), Mick Taylor (1969–1975), or Ronnie Wood (1975–present). In the recording studio Richards sometimes plays all of the guitar parts, notably on the songs " Paint It Black", " Ruby Tuesday", " Sympathy for the Devil", and " Gimme Shelter". He is also a vocalist, singing backing vocals on many Rolling Stones songs as well as occasional lead vocals, such as on the Rolling Stones' 1972 single " Happy", as well as with his side project, the X-Pensive Winos.

He has also appeared in three Pirates of the Caribbean films as Captain Teague, father of Jack Sparrow, whose look and characterization was inspired by Richards himself. ( Full article...)

Deep Shadows and Brilliant Highlights is the third studio album by Finnish gothic rock band HIM. Released 27 August 2001, HIM began recording demos in the fall of 2000, with producer T.T. Oksala intending to release the initial recordings as the finished album. After being rejected by the record label BMG, producer Kevin Shirley was brought in, who clashed with members of the band over his style of working. The recording process took eleven months, with outside influences within the industry and the extended time frame causing friction with the album, which ended up with a sleeker and more pop-oriented sound than its predecessors. Deep Shadows and Brilliant Highlights was also HIM's first album to feature keyboardist Janne "Burton" Puurtinen.

" Objects in the Rear View Mirror May Appear Closer Than They Are" is a song composed and written by Jim Steinman, and recorded by Meat Loaf. The song was released in 1994 as the third single from the album Bat Out of Hell II: Back into Hell and it reached number 38 on US's Billboard Hot 100, and number 26 in the UK Top 40. With its chart success, this song became the hit with the longest un- bracketed title . The title is derived from the safety warning on car side mirrors in the US, " Objects in mirror are closer than they appear".

Parts of the melody were adapted from Steinman's earlier tune "Surf's Up", which appears on Steinman's solo album Bad for Good. Steinman later reused the melody, with new lyrics by Michael Kunze, for "Die Unstillbare Gier", a song in the Tanz der Vampire productions, and for "Confession of a Vampire" in the ill-fated US version (Dance of the Vampires). ( Full article...)

Post-Britpop is an alternative rock subgenre and is the period in the late 1990s and early 2000s, following Britpop, when the media were identifying a "new generation" or "second wave" of guitar bands influenced by acts like Oasis and Blur, but with less overt British concerns in their lyrics and making more use of American rock and indie influences, as well as experimental music. Bands in the post-Britpop era that had been established acts, but gained greater prominence after the decline of Britpop, such as Radiohead and the Verve, and new acts such as Travis, Stereophonics, Feeder, Toploader and particularly Coldplay, achieved much wider international success than most of the Britpop groups that had preceded them, and were some of the most commercially successful acts of the late 1990s and early 2000s. ( Full article...)