From Wikipedia
https://en.wikipedia.org/wiki/Portal:Rhythm_and_blues
Wikipedia portal for content related to Rhythm and blues

Rhythm and blues, often abbreviated as R&B or R'n'B, is a genre of popular music that originated in African-American communities in the 1940s. The term was originally used by record companies to describe recordings marketed predominantly to urban African Americans, at a time when "urbane, rocking, jazz based music with a heavy, insistent beat" was becoming more popular. In the commercial rhythm and blues music typical of the 1950s through the 1970s, the bands usually consisted of piano, one or two guitars, bass, drums, one or more saxophones, and sometimes background vocalists. R&B lyrical themes often encapsulate the African-American experience of pain and the quest for freedom and joy, as well as triumphs and failures in terms of relationships, economics, and aspirations.

The term "rhythm and blues" has undergone a number of shifts in meaning. In the early 1950s, it was frequently applied to blues records. Starting in the mid-1950s, after this style of music contributed to the development of rock and roll, the term "R&B" became used to refer to music styles that developed from and incorporated electric blues, as well as gospel and soul music. In the 1960s, several British rock bands such as the Rolling Stones, the Who and the Animals were referred to and promoted as being R&B bands; posters for the Who's residency at the Marquee Club in 1964 contained the slogan, "Maximum R&B". Their mix of rock and roll and R&B is now known as " British rhythm and blues". By the end of the 1970s, the term "rhythm and blues" had changed again and was used as a blanket term for soul and funk. In the late 1980s, a newer style of R&B developed, becoming known as " contemporary R&B". It combines rhythm and blues with elements of pop, soul, funk, disco, hip hop, and electronic music. ( Full article...)

There's a Riot Goin' On (sometimes referred to as Riot) is the fifth studio album by American funk and soul band Sly and the Family Stone. It was recorded from 1970 to 1971 at Record Plant Studios in Sausalito, California and released later that year on November 1 by Epic Records. The recording was dominated by band frontman Sly Stone during a period of elevated drug use and intra-group tension.

For the album, Sly and the Family Stone departed from the optimistic psychedelic soul of their previous music and explored a darker, more challenging sound, employing edgy funk rhythms, primitive drum machines, extensive overdubbing, and a dense mix. Conceptually and lyrically, There's a Riot Goin' On embraced apathy, pessimism, and disillusionment with both Stone's fame and 1960s counterculture amid a turbulent political climate in the United States at the turn of the 1970s, influenced by the decline of the civil rights movement and the rise of the Black Power movement. The album's title was originally planned to be Africa Talks to You, but it changed in response to Marvin Gaye's album What's Going On (1971), released six months before Riot.

A commercial success, There's a Riot Goin' On topped the Billboard Pop Album and Soul Album charts, while its lead single " Family Affair" reached number-one on the Pop Singles chart. The album was eventually certified platinum by the Recording Industry Association of America (RIAA) for sales of at least one million copies in the US. Originally released to mixed reviews, the album has since been praised as one of the greatest and most influential recordings of all time, having impacted the funk, jazz-funk, and hip hop genres in particular. It ranks frequently and highly in many publications' best-album lists, including Rolling Stone's " 500 Greatest Albums of All Time", on which it placed 99th in 2003 and 82nd in 2020. ( Full article...) 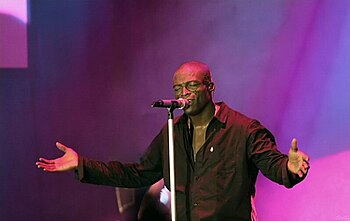 The Supremes were a successful American female singing trio. Active from 1959 until 1977, the Supremes performed, at various times, doo-wop, pop, soul, Broadway show tunes, and disco.

One of Motown Records' signature acts, The Supremes were the most successful African American musical act of the 1960s, [1] recording twelve American number-one hits between 1964 and 1969. [1] Many of these singles were written and produced by Motown's main songwriting and production team, Holland-Dozier-Holland. The crossover success of the Supremes during the mid-1960s paved the way for future black soul and R&B acts to gain mainstream audiences both in the United States and overseas.

Founded in Detroit, Michigan in 1959, The Supremes began as a quartet called The Primettes. Founding members Florence Ballard, Mary Wilson, Diana Ross and Betty McGlown, all from the Brewster-Douglass public housing project in Detroit, [2] were the sister act to The Primes (later known as The Temptations). [2] In 1960, Barbara Martin replaced McGlown, and the group signed with Motown in 1961 as The Supremes. Martin left in early 1962, and Ross, Ballard and Wilson carried on as a trio. Achieving success in the mid-1960s with Ross as lead singer, Motown president Berry Gordy renamed the group Diana Ross & the Supremes in 1967 and replaced Ballard with Cindy Birdsong. Ross left the group for a successful solo career in 1970 and was replaced by Jean Terrell. After 1972, the lineup of the Supremes changed frequently, with Lynda Laurence, Scherrie Payne and Susaye Greene all becoming members before the group ended its eighteen-year existence in 1977.