From Wikipedia
https://en.wikipedia.org/wiki/Portal:Prostitution
Wikipedia portal for content related to Prostitution 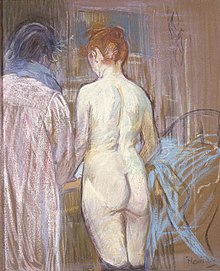 Prostitution is the business or practice of engaging in sexual activity in exchange for payment. The definition of “sexual activity” varies, but it is often defined as an activity requiring physical contact (e.g. sexual intercourse, non-penetrative sex, oral sex, etc.) with the customer. The requirement of physical contact also creates the risk of transferring diseases. Prostitution is sometimes described as sexual services, commercial sex or, colloquially, hooking. It is sometimes referred to euphemistically as "the world's oldest profession" in the English-speaking world. A person who works in this field is called a prostitute and is a type of sex worker.

Prostitution occurs in a variety of forms, and its legal status varies from country to country (sometimes from region to region within a given country), ranging from being an enforced or unenforced crime, to unregulated, to a regulated profession. It is one branch of the sex industry, along with pornography, stripping, and erotic dancing. Brothels are establishments specifically dedicated to prostitution. In escort prostitution, the act may take place at the client's residence or hotel room (referred to as out-call), or at the escort's residence or a hotel room rented for the occasion by the escort (in-call). Another form is street prostitution.

There are about 42 million prostitutes in the world, living all over the world (though most of Central Asia, the Middle East and Africa lacks data, studied countries in that large region rank as top sex tourism destinations). Estimates place the annual revenue generated by prostitution worldwide to be over $100 billion. The majority of prostitutes are female and have male clients. ( Full article...)

More about prostitution - its laws, history & statistics
Refresh with new selections below (purge)

Nacton village, near where the body of Anneli Alderton was found.

The Ipswich serial murders, commonly known as the work of the Suffolk Strangler, took place between 30 October and 10 December 2006, during which time the bodies of five murdered women were discovered at different locations near Ipswich, Suffolk, England. All of the victims were women who had worked as prostitutes in the Ipswich area. Their bodies were discovered naked, but there were no signs of sexual assault. Two of the victims, Anneli Alderton and Paula Clennell, were confirmed to have been killed by asphyxiation. A cause of death for the other victims, Gemma Adams, Tania Nicol and Annette Nicholls, was not established.

Suffolk Police linked the killings and launched a murder investigation codenamed Operation Sumac. Due to the size of the investigation police officers were drafted from several other police forces. Two arrests were made in connection with the murders. The first suspect, who was never officially named by police, was released without charge. Forklift truck driver Steven Gerald James Wright, then aged 48, was arrested on suspicion of murder on 19 December 2006 and charged with the murders of all five women on 21 December. ( read more ...) 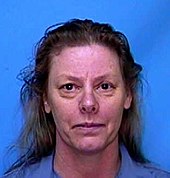 Aileen Carol Wuornos Pralle ( /ˈwɔːrnoʊs/; born Aileen Carol Pittman; February 29, 1956 – October 9, 2002) was an American serial killer who murdered seven men in Florida between 1989 and 1990 by shooting them at point-blank range. Wuornos claimed that her victims had either raped or attempted to rape her while she was working as a prostitute, and that all of the homicides were committed in self-defense. She was convicted and sentenced to death for six of the murders and was executed by lethal injection on October 9, 2002.

Legality of prostitution in North America

Do you have a question about Portal:Prostitution to which you can't find the answer?

For editor resources and to collaborate with other editors on improving Wikipedia's Portal:Prostitution-related articles, see WikiProject Sexology and sexuality/Sex work task force.

Here are some tasks you can do: