From Wikipedia
https://en.wikipedia.org/wiki/Portal:Piracy
Wikipedia portal for content related to Piracy
The Piracy Portal 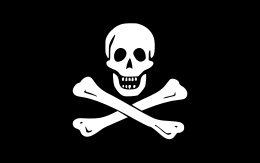 The traditional " Jolly Roger" of piracy

Piracy is an act of robbery or criminal violence by ship or boat-borne attackers upon another ship or a coastal area, typically with the goal of stealing cargo and other valuable goods. Those who conduct acts of piracy are called pirates, while the dedicated ships that pirates use are called pirate ships. The earliest documented instances of piracy were in the 14th century BC, when the Sea Peoples, a group of ocean raiders, attacked the ships of the Aegean and Mediterranean civilizations. Narrow channels which funnel shipping into predictable routes have long created opportunities for piracy, as well as for privateering and commerce raiding. Historic examples include the waters of Gibraltar, the Strait of Malacca, Madagascar, the Gulf of Aden, and the English Channel, whose geographic structures facilitated pirate attacks. A land-based parallel is the ambushing of travelers by bandits and brigands in highways and mountain passes. Privateering uses similar methods to piracy, but the captain acts under orders of the state authorizing the capture of merchant ships belonging to an enemy nation, making it a legitimate form of war-like activity by non-state actors.

While the term can include acts committed in the air, on land (especially across national borders or in connection with taking over and robbing a car or train), or in other major bodies of water or on a shore, in cyberspace, as well as the fictional possibility of space piracy, it generally refers to maritime piracy. It does not normally include crimes committed against people traveling on the same vessel as the perpetrator (e.g. one passenger stealing from others on the same vessel). Piracy or pirating is the name of a specific crime under customary international law and also the name of a number of crimes under the municipal law of a number of states. In the early 21st century, seaborne piracy against transport vessels remains a significant issue (with estimated worldwide losses of US$16 billion per year in 2004), particularly in the waters between the Red Sea and Indian Ocean, off the Somali coast, and also in the Strait of Malacca and Singapore.

Today, pirates armed with automatic weapons, such as rifles, and machine guns, grenades and rocket propelled grenades use small motorboats to attack and board ships, a tactic that takes advantage of the small number of crew members on modern cargo vessels and transport ships. They also use larger vessels, known as "mother ships", to supply the smaller motorboats. The international community is facing many challenges in bringing modern pirates to justice, as these attacks often occur in international waters. Some nations have used their naval forces to protect private ships from pirate attacks and to pursue pirates, and some private vessels use armed security guards, high-pressure water cannons, or sound cannons to repel boarders, and use radar to avoid potential threats. ( Full article...)

Jean Lafitte (ca. 1776 – ca. 1823) was a pirate and privateer in the Gulf of Mexico in the early 19th century. He and his elder brother, Pierre, spelled their last name Laffite, but English-language documents of the time used "Lafitte," and this is the commonly seen spelling in the United States, including for places named for him. Lafitte is believed to have been born either in France or the French colony of Saint-Domingue. By 1805, he operated a warehouse in New Orleans to help disperse the goods smuggled by his brother Pierre Lafitte. After the United States government passed the Embargo Act of 1807, the Lafittes moved their operations to an island in Barataria Bay. By 1810, their new port was very successful; the Lafittes pursued a successful smuggling operation and also started to engage in piracy.

Though Lafitte tried to warn of a British attack, the American authorities invaded Barataria in 1814 and captured most of Lafitte's fleet. In return for a pardon, Lafitte helped General Andrew Jackson defend New Orleans against the British in 1815. The Lafittes then became spies for the Spanish and moved to Galveston Island where they developed the colony there. Lafitte continued pirating around Central American ports until he died trying to capture Spanish vessels in 1823. Speculation around his death and life continue amongst historians. 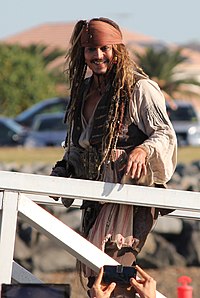 Captain Jack Sparrow is a fictional character portrayed by Johnny Depp, introduced in the film Pirates of the Caribbean: The Curse of the Black Pearl ( 2003). He appears in the back-to-back sequels, Dead Man's Chest ( 2006) and At World's End ( 2007), as well as in a future film, On Stranger Tides ( 2011). He is the main protagonist in all the films. He is also the subject of a children's book series, Pirates of the Caribbean: Jack Sparrow, which chronicles his teenage years, and the character's image was introduced into the theme park ride that inspired the films when it was revamped in 2006. The character has also appeared in numerous video games. Sparrow is one of the Brethren Court, the Pirate Lords of the Caribbean Sea and can be treacherous, surviving mostly by using wit and negotiation rather than weapons and force; although he will fight if necessary, he tries to flee most dangerous situations. Sparrow is introduced seeking to regain his ship, the Black Pearl from his mutinous first mate Hector Barbossa, and attempts to escape his blood debt to the legendary Davy Jones while battling the East India Trading Co. ( more...)

More did you knows...