Phoenicia ( /fəˈnɪʃə, -ˈniː-/; from Ancient Greek: Φοινίκη, Phoiníkē) was an ancient Semitic-speaking thalassocratic civilization that originated in the Levant region of the eastern Mediterranean, specifically modern Lebanon. It was concentrated along the coast of Lebanon and included some coastal areas of Syria and northern Palestine reaching as far north as Arwad and as far south as Acre and possibly Gaza. At its height between 1100 and 200 BC, Phoenician civilization spread across the Mediterranean, from Cyprus to the Iberian Peninsula.

The term Phoenicia is an exonym originating from ancient Greek that most likely described Tyrian purple, a major export of Canaanite port towns; it did not correspond precisely to Phoenician culture or society as it would have been understood natively. Scholars thus debate whether the Phoenicians were actually a distinct civilization from the Canaanites and other residents of the Levant.

The Phoenicians came to prominence following the collapse of most major cultures during the Late Bronze Age. They were renowned in antiquity as adept merchants, expert seafarers, and intrepid explorers. They developed an expansive maritime trade network that lasted over a millennium, becoming the dominant commercial power for much of classical antiquity. Phoenician trade also helped facilitate the exchange of cultures, ideas, and knowledge between major cradles of civilization such as Greece, Egypt, and Mesopotamia. After its zenith in the ninth century BC, Phoenician civilization in the eastern Mediterranean slowly declined in the face of foreign influence and conquest, though its presence would remain in the central and western Mediterranean until the second century BC.

Phoenician civilization was organized in city-states, similar to those of ancient Greece, of which the most notable were Tyre, Sidon, Arwad, Berytus, Byblos, and Carthage. Each city-state was politically independent, and there is no evidence the Phoenicians viewed themselves as a single nationality. The Carthaginians, who descended from a Phoenician settlement in northwest Africa, emerged as major civilization in their own right in the seventh century BC. Their multi-ethnic empire, which maintained a strong Phoenician identity, spanned the western Mediterranean and challenged the Roman Republic. The destruction of Carthage by Rome at the conclusion of the Third Punic War in 146 BC marked the end of the last major, independent Phoenician state.

Long considered a lost civilization due to the lack of indigenous written records, academic and archaeological developments since the mid-20th century have revealed the Phoenicians to be a complex and influential civilization. Their best known legacy is the world's oldest verified alphabet, which they transmitted across the Mediterranean world. The Phoenician alphabet formed the basis of the Greek alphabet, which in turn was adopted for the Latin script, the world's dominant writing system. The Phoenicians are also credited with innovations in shipbuilding, navigation, industry, agriculture, and government. Their international trade network is believed to have fostered the economic, political, and cultural foundations of Western civilization.

Read more about Phoenicia, its mythology and language
Refresh with new selections below (purge)

The Battle of Adys (or Adis) took place in late 255 BC during the First Punic War between a Carthaginian army jointly commanded by Bostar, Hamilcar and Hasdrubal and a Roman army led by Marcus Atilius Regulus. Earlier in the year, the new Roman navy established naval superiority and used this advantage to invade the Carthaginian homeland, which roughly aligned with modern Tunisia in North Africa. After landing on the Cape Bon Peninsula and conducting a successful campaign, the fleet returned to Sicily, leaving Regulus with 15,500 men to hold the lodgement in Africa over the winter.

Instead of holding his position, Regulus advanced towards the Carthaginian capital, Carthage. The Carthaginian army established itself on a rocky hill near Adys (modern Uthina) where Regulus was besieging the town. Regulus had his forces execute a night march to launch twin dawn assaults on the Carthaginians' fortified hilltop camp. One part of this force was repulsed and pursued down the hill. The other part then charged the pursuing Carthaginians in the rear and routed them in turn. At this the Carthaginians remaining in the camp panicked and fled. ( Full article...)

Good article - show another
This is a Good article, an article that meets a core set of high editorial standards.

Eighteenth-century depiction of the battle, showing the younger Scipio rescuing his wounded father

The Battle of Ticinus was a battle of the Second Punic War fought between the Carthaginian forces of Hannibal and the Romans under Publius Cornelius Scipio in late November 218 BC. The battle took place in the flat country on the right bank of the River Ticinus, to the west of modern Pavia in northern Italy. Hannibal led 6,000 African and Iberian cavalry, while Scipio led 3,600 Roman, Italian and Gallic cavalry and a large but unknown number of light infantry javelinmen.

War had been declared early in 218 BC over perceived infringements of Roman prerogatives in Iberia (modern Spain and Portugal) by Hannibal. Hannibal had gathered a large army, marched out of Iberia, through Gaul and over the Alps into Cisalpine Gaul (northern Italy), where many of the local tribes were at war with Rome. The Romans were taken by surprise, but one of the consuls for the year, Scipio, led an army along the north bank of the Po with the intention of giving battle to Hannibal. The two commanding generals each led out strong forces to reconnoitre their opponents. Scipio mixed a large number of javelinmen with his main cavalry force, anticipating a large-scale skirmish. Hannibal put his close-order cavalry in the centre of his line, with his light Numidian cavalry on the wings. On sighting the Roman infantry the Carthaginian centre immediately charged and the javelinmen fled back through the ranks of their cavalry. A large cavalry melee ensued, with many cavalry dismounting to fight on foot and many of the Roman javelinmen reinforcing the fighting line. This continued indecisively until the Numidians swept round both ends of the line of battle, and attacked the still disorganised velites; the small Roman cavalry reserve, to which Scipio had attached himself; and the rear of the already engaged Roman cavalry, throwing them all into confusion and panic. ( Full article...)

The Corpus Inscriptionum Semiticarum (abbreviated CIS) is a collection of ancient inscriptions in Semitic languages produced since the end of 2nd millennium BC until the rise of Islam. It was published in Latin. In a note recovered after his death, Ernest Renan stated that: "Of all I have done, it is the Corpus I like the most."

The first part was published in 1881, fourteen years after the beginning of the project. Renan justified the fourteen year delay in the preface to the volume, pointing to the calamity of the Franco-Prussian war and the difficulties that arose in the printing the Phoenician characters, whose first engraving was proven incorrect in light of the inscriptions discovered subsequently. A smaller collection – Répertoire d'Épigraphie Sémitique (abbreviated RES) – was subsequently created to present the Semitic inscriptions without delay and in a deliberately concise way as they became known, and was published in French rather than Latin. The Répertoire was for the Corpus Inscriptionum Semiticarum what the Ephemeris epigraphica latina was for the Corpus Inscriptionum Latinarum.

The publication of the series continued until 1962. ( Full article...) 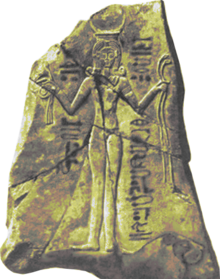 Qetesh (also Qadesh, Qedesh, Qetesh, Kadesh, Kedesh, Kadeš or Qades /ˈkɑːdɛʃ/) is a goddess, who was adopted during the late Bronze Age from the religion of Canaan into the ancient Egyptian religion during its New Kingdom. She was a fertility goddess of sacred ecstasy and sexual pleasure, and became a popular deity.

The name was probably vocalized by Egyptians as, *Qātiša, from the Semitic root Q-D-Š meaning 'holy'. Her city of worship was Qadesh in present-day Syria. ( Full article...)

The following are images from various Phoenicia-related articles on Wikipedia.