From Wikipedia
https://en.wikipedia.org/wiki/Portal:Philately
Wikipedia portal for content related to Philately

Stamp collecting is the collecting of postage stamps and related objects, such as covers ( envelopes, postcards or parcels with stamps affixed). It is one of the world's most popular hobbies, with estimates of the number of collectors ranging up to 20 million in the United States alone.

More about Philately and Stamp collecting...
Refresh with new selections below (purge)
edit 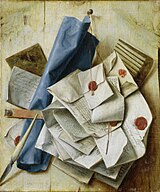 Letter sheets are items of postal stationery issued by a postal authority. A letter sheet is a piece of paper that can be folded, usually sealed, most often with sealing wax in the 18th and 19th century, and mailed without the use of an envelope that only became popular in the late 19th century.

The first postal stationery item issued by a government is thought to be the coat of arms of Venice on a 1608 lettersheet. Part of Rowland Hill's postal reforms in the United Kingdom were the introduction of prepaid lettersheets and envelopes in 1840 designed by the artist William Mulready, whose name is always associated with these lettersheets and envelopes. Aerograms are a mid-20th century development of the letter sheet. 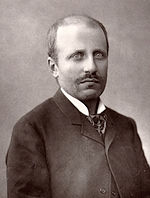 Philip Ferrari de La Renotière (1850–1917) was an early stamp collector who assembled what is considered the most complete stamp collection that ever existed. Ferrary started collecting in his youth, then inherited a great fortune, which he dedicated to the purchase of rare stamps and coins. Although he lived in Paris, Ferrary frequently travelled, meeting with dealers and often paying them in gold on the spot. He was impulsive in his buying and seemed to be indifferent to price.

He owned some of the most notable stamps known, like the unique Treskilling Yellow of Sweden, the 1856 British Guiana 1c magenta and the only unused copy of the Two Cent Hawaii Missionary of 1851.

There is a discussion about getting more people involved in Philately on Wikipedia. Join the discussion and share your thoughts here.

WikiProject Philately organizes the development of articles relating to philately. The collaboration focuses on one article at a time until they can proudly put that article up as a featured article candidate. This will last until they have run through a pool of "featurable" articles, then they will use a time-based system.

Currently there is one philatelic featured article, if you can help with another candidate, please do so.

... that the first Penny Post was established in London in 1680 by William Dockwra nearly 200 years before the better known Uniform Penny Post that was part of the postal reforms of 1839 and 1840 in Great Britain.

... that a forerunner is a postage stamp used during the time period before a region or territory issues stamps of its own?

... that the Royal Philatelic Society is the oldest philatelic society in the world, founded in London in 1869?

... that Marcophily is the specialised study and collection of postmarks, cancellations and postal markings applied by hand or machine on mail?

... that Non-denominated postage are postage stamps that do not show a monetary value on the face?

... that the Daguin machine was a cancelling machine first used in post offices in Paris in 1884?

... that the first airmail of the United States was a personal letter from George Washington carried on an aerial balloon flight from Philadelphia by Jean Pierre Blanchard?

Stamp of the month

Hawaiian Missionaries are the first postage stamps of the Kingdom of Hawaii, issued in 1851. They came to be known as the "Missionaries" because they were primarily found on the correspondence of missionaries working in the islands. An astonishing lore surrounds this stamp: in 1892, one of its earlier owners, Gaston Leroux, was murdered for it by an envious fellow philatelist, Hector Giroux.

Only a handful of these stamps have survived. The stamps went on sale October 1, 1851, in three denominations: 2-cent, 5-cent and 13-cent values. A 6-cent appeared later. The design was very simple, consisting only of a central numeral of the denomination framed by standard printer's ornaments, with the denomination repeated in words at the bottom.