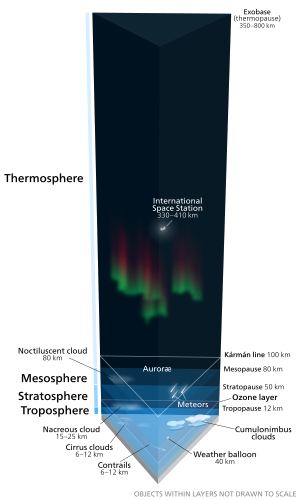 The interface between the Earth's surface and outer space. The Kármán line at an altitude of 100 km (62 mi) is shown. The layers of the atmosphere are drawn to scale, whereas objects within them, such as the International Space Station, are not.

Outer space is the expanse that exists beyond Earth and between celestial bodies. Outer space is not completely empty—it is a hard vacuum containing a low density of particles, predominantly a plasma of hydrogen and helium, as well as electromagnetic radiation, magnetic fields, neutrinos, dust, and cosmic rays. The baseline temperature of outer space, as set by the background radiation from the Big Bang, is 2.7 kelvins (−270.45 °C; −454.81 °F). The plasma between galaxies accounts for about half of the baryonic (ordinary) matter in the universe; it has a number density of less than one hydrogen atom per cubic metre and a temperature of millions of kelvins. Local concentrations of matter have condensed into stars and galaxies. Studies indicate that 90% of the mass in most galaxies is in an unknown form, called dark matter, which interacts with other matter through gravitational but not electromagnetic forces. Observations suggest that the majority of the mass-energy in the observable universe is dark energy, a type of vacuum energy that is poorly understood. Intergalactic space takes up most of the volume of the universe, but even galaxies and star systems consist almost entirely of empty space.

Outer space does not begin at a definite altitude above the Earth's surface. The Kármán line, an altitude of 100 km (62 mi) above sea level, is conventionally used as the start of outer space in space treaties and for aerospace records keeping. The framework for international space law was established by the Outer Space Treaty, which entered into force on 10 October 1967. This treaty precludes any claims of national sovereignty and permits all states to freely explore outer space. Despite the drafting of UN resolutions for the peaceful uses of outer space, anti-satellite weapons have been tested in Earth orbit.

Humans began the physical exploration of space during the 20th century with the advent of high-altitude balloon flights. This was followed by crewed rocket flights and, then, crewed Earth orbit, first achieved by Yuri Gagarin of the Soviet Union in 1961. Due to the high cost of getting into space, human spaceflight has been limited to low Earth orbit and the Moon. On the other hand, uncrewed spacecraft have reached all of the known planets in the Solar System.

Outer space represents a challenging environment for human exploration because of the hazards of vacuum and radiation. Microgravity also has a negative effect on human physiology that causes both muscle atrophy and bone loss. In addition to these health and environmental issues, the economic cost of putting objects, including humans, into space is very high. ( Full article...)

GRB 970228 was a gamma-ray burst (GRB) detected on February 28, 1997 at 02:58 UTC. A gamma-ray burst is a highly luminous flash of gamma rays, the most energetic form of electromagnetic radiation. Since 1993, physicists had predicted these bursts to be followed by a longer-lived afterglow at longer wavelengths, such as radio waves, x-rays, and even visible light. Until this event, GRBs had only been observed at gamma wavelengths. This was the first burst for which an afterglow was observed. The burst had multiple peaks in its light curve and lasted approximately 80 seconds. Peculiarities in the light curve of GRB 970228 suggested that a supernova may have occurred as well. The position of the burst coincided with a galaxy about 8.1 billion light-years from Earth, providing early evidence that GRBs occur well beyond the Milky Way.

The following are images from various outer space-related articles on Wikipedia.