This symbol of radioactivity is internationally recognized.
Nuclear technology is technology that involves the nuclear reactions of atomic nuclei. Among the notable nuclear technologies are nuclear reactors, nuclear medicine and nuclear weapons. It is also used, among other things, in smoke detectors and gun sights. ( Full article...)
A nuclear weapon (also called an atom bomb, nuke, atomic bomb, nuclear warhead, A-bomb, or nuclear bomb) is an explosive device that derives its destructive force from nuclear reactions, either fission (fission bomb) or from a combination of fission and fusion reactions ( thermonuclear bomb). Both bomb types release large quantities of energy from relatively small amounts of matter.

The Smyth Report (officially Atomic Energy for Military Purposes) is the common name of an administrative history written by American physicist Henry DeWolf Smyth about the Manhattan Project, the Allied effort to develop atomic bombs during World War II. The subtitle of the report is A General Account of the Development of Methods of Using Atomic Energy for Military Purposes. It was released to the public on August 12, 1945, just days after the atomic bombings of Hiroshima and Nagasaki on August 6 and 9.

Smyth was commissioned to write the report by Major General Leslie R. Groves, Jr., the director of the Manhattan Project. The Smyth Report was the first official account of the development of the atomic bombs and the basic physical processes behind them. It also served as an indication as to what information was declassified; anything in the Smyth Report could be discussed openly. For this reason, the Smyth Report focused heavily on information, such as basic nuclear physics, which was either already widely known in the scientific community or easily deducible by a competent scientist, and omitted details about chemistry, metallurgy, and ordnance. This would ultimately give a false impression that the Manhattan Project was all about physics.

The Smyth Report sold almost 127,000 copies in its first eight printings, and was on The New York Times best-seller list from mid-October 1945 until late January 1946. It has been translated into over 40 languages. ( Full article...) ( Full article...) 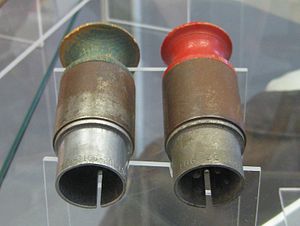 Credit:  Nick-D
Arming plugs for a 'Little Boy' type atomic bomb on display at the National Air and Space Museum's Steven F. Udvar-Hazy Center. The plugs were found in the navigator's compartment in the B-29 bomber Enola Gay. The green plug may have been used in the bomb which was dropped on Hiroshima. The plug on the right is probably a spare.
edit

John Lansdale Jr. (9 January 1912 – 22 August 2003) was a United States Army colonel who was in charge of intelligence and security for the Manhattan Project.

A graduate of the Virginia Military Institute and Harvard Law School, Lansdale was commissioned as a second lieutenant in the United States Army Reserve in 1933. He was called up for active duty in June 1941, and was assigned to the Investigations Branch in the Office of the Assistant Chief of Staff, G-2 ( military intelligence) of the War Department General Staff. He became involved with the Manhattan Project in 1942, eventually becoming Brigadier General Leslie Groves's special assistant for security. Lansdale coordinated the activities of the Manhattan Project's field security teams with those of other agencies such as the FBI.

In April 1945, Groves sent Lansdale to Europe, where he worked with the Alsos Mission to secure 1,000 tons of uranium ore from the German Wirtschaftliche Forschungsgesellschaft (WiFO) plant in Stassfurt. He also participated in the planning and execution of Operation Harborage, in which a special Allied force went deep behind enemy lines, seized 1.5 tons of uranium ingots, and captured a number of German nuclear energy project scientists, including Carl Friedrich von Weizsäcker, Max von Laue, Karl Wirtz, Horst Korsching and Erich Bagge and Otto Hahn. ( Full article...) ( Full article...)

15 June 2021 – Cross-Strait relations
The Taiwanese Defense Ministry reports that 28 Chinese air force planes, including four H-6 bombers capable of carrying nuclear weapons, entered Taiwan's air defense identification zone and flew close to the southern tip of the main island and around the Pratas Islands. This is China's largest incursion since Taiwan began monitoring such activities last year. (Reuters)
8 June 2021 –
The Iraqi Radioactive Sources Regulatory Authority announces that Iraq is seeking to build eight nuclear reactors capable of producing 11 gigawatts combined to address increasing electricity demand, which is predicted to rise 50% from roughly 28GW today to 42GW by 2030. Average electrical power output currently stands at about 18.4GW, of which 1.2GW is imported. The Authority says that they are in discussions with Korean, Russian, U.S., and French officials on how to implement the plan. (Bloomberg News)
3 June 2021 – China–United States relations
U.S. President Joe Biden signs an executive order banning Americans from investing in nearly a dozen Chinese companies and their subsidiaries, such as China General Nuclear Power Group, either for their ties to the People's Liberation Army or for selling surveillance technology that is used to spy on the country's religious minorities or dissidents. The ban will go into effect on August 2, and current investors have a year to fully divest from these companies. (South China Morning Post)