listen); Nynorsk: Noreg; Northern Sami: Norga; Lule Sami: Vuodna; Southern Sami: Nöörje; Kven: Norja), officially the Kingdom of Norway, is a Nordic country in Northern Europe whose mainland territory comprises the western and northernmost portion of the Scandinavian Peninsula. The remote Arctic island of Jan Mayen and the archipelago of Svalbard also form part of Norway. Bouvet Island, located in the Subantarctic, is a dependency of Norway; it also lays claims to the Antarctic territories of Peter I Island and Queen Maud Land.

Norway has a total area of 385,207 square kilometres (148,729 sq mi) and had a population of 5,385,300 in November 2020. The country shares a long eastern border with Sweden ( 1,619 km or 1,006 mi long). Norway is bordered by Finland and Russia to the north-east and the Skagerrak strait to the south, with Denmark on the other side. Norway has an extensive coastline, facing the North Atlantic Ocean and the Barents Sea. The maritime influence also dominates Norway's climate with mild lowland temperatures on the sea coasts, whereas the interior, while colder, is also a lot milder than areas elsewhere in the world on such northerly latitudes. Even during polar night in the north, temperatures above freezing are commonplace on the coastline. The maritime influence brings high rainfall and snowfall to some areas of the country.

Harald V of the House of Glücksburg is the current King of Norway. Erna Solberg has been prime minister since 2013 when she replaced Jens Stoltenberg. As a unitary sovereign state with a constitutional monarchy, Norway divides state power between the parliament, the cabinet and the supreme court, as determined by the 1814 constitution. The kingdom was established in 872 as a merger of many petty kingdoms and has existed continuously for 1,149 years. From 1537 to 1814, Norway was a part of the Kingdom of Denmark–Norway, and from 1814 to 1905, it was in a personal union with the Kingdom of Sweden. Norway was neutral during the First World War and remained so until April 1940 when the country was invaded and occupied by Germany until the end of World War II.

Norway has both administrative and political subdivisions on two levels: counties and municipalities. The Sámi people have a certain amount of self-determination and influence over traditional territories through the Sámi Parliament and the Finnmark Act. Norway maintains close ties with both the European Union and the United States. Norway is also a founding member of the United Nations, NATO, the European Free Trade Association, the Council of Europe, the Antarctic Treaty, and the Nordic Council; a member of the European Economic Area, the WTO, and the OECD; and a part of the Schengen Area. In addition, the Norwegian languages share mutual intelligibility with Danish and Swedish. ( Full article...)

This is a Featured article, which represents some of the best content on English Wikipedia.
edit

A BM71 Airport Express Train ready for departure from Oslo S
Flytoget AS (branded in English as the Airport Express Train) is a high-speed airport rail link connecting Oslo Airport, Gardermoen to Oslo, Norway, in 19 minutes.The sixteen BM71 trains run on the Gardermobanen high-speed railway line, normally every ten minutes, with every other service continuing westwards to Asker. These serve eight stops, with plans to extend to Drammen in 2009. Flytoget transported 5.4 million passengers in 2007, a 34% market share of airport ground transport. The service is the only high-speed rail service in operation in Norway. The company was founded in 1992 and operations started in 1998; during construction the tunnel Romeriksporten had a leak, draining two lakes and delaying the opening the tunnel one year. Flytoget is owned by the Norwegian Ministry of Trade and Industry. ( Full article...)
More selected articles
edit 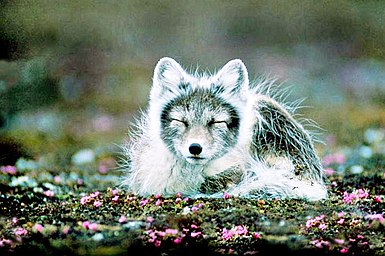 Arctic Fox
Credit:  Per Harald Olsen
The Arctic Fox (Alopex lagopus), also known as the White fox, is a Fox of the order Carnivora. It is a small fox native to cold Arctic regions of the Northern Hemisphere. The Scandinavian mainland population is acutely endangered, despite decades of legal protection from hunting and persecution. The total population estimate in all of Norway, Sweden and Finland is a mere 120 adult individuals.
edit

The following are images from various Norway-related articles on Wikipedia.

This is a Good article, an article that meets a core set of high editorial standards.
edit

Kristian Eivind Espedal (born August 7, 1975), better known by his stage name Gaahl, is a Norwegian black metal vocalist, and is the frontman of Norwegian band Gorgoroth. Gaahl was born in the village of Espedal in Fjaler, Norway in 1975. He spent his youth living in a small village, which his family has owned for centuries. Gaahl, along with his family, still reside in the village, though they are fifteen minutes apart from each other. Gaahl has been involved with black metal since 1992, and has been in bands such as Gaahlskagg (with Gorgoroth live guitarist Skagg), Trelldom, and Sigfader (with Skagg and Kvitrafn). Gaahl joined Gorgoroth in 1998, and was first heard on their Nuclear Blast album Destroyer; however, he only sang on the title track. ( Full article...)
edit

Balsfjord is a municipality in the county of Troms, Norway. The municipality consists of two fjords, Malangen and Balsfjorden, surrounded by comparatively rich farmlands under majestic peaks including the southern end of the Lyngen Alps. ( Full article...)