North Macedonia (Macedonia until February 2019), officially the Republic of North Macedonia, is a country in Southeast Europe. It gained independence in 1991 as one of the successor states of Yugoslavia. North Macedonia is a landlocked country bordering with Kosovo to the northwest, Serbia to the north, Bulgaria to the east, Greece to the south, and Albania to the west. It constitutes approximately the northern third of the larger geographical region of Macedonia. Skopje, the capital and largest city, is home to a quarter of the country's 2.06 million population. The majority of the residents are ethnic Macedonians, a South Slavic people. Albanians form a significant minority at around 25%, followed by Turks, Romani, Serbs, Bosniaks, and Aromanians.

The history of the region begins with the kingdom of Paeonia, a mixed Thraco- Illyrian polity. In the late sixth century BC, the area was subjugated by the Persian Achaemenid Empire, then incorporated into the kingdom of Macedonia in the fourth century BC. The Romans conquered the region in the second century BC and made it part of the larger province of Macedonia. The area remained part of the Byzantine Empire, but was often raided and settled by Slavic tribes beginning in the sixth century of the Christian era. Following centuries of contention between the Bulgarian, Byzantine, and Serbian Empire, it was part of the Ottoman dominion from the mid-14th until the early 20th century, when, following the Balkan Wars of 1912 and 1913, the modern territory of North Macedonia came under Serbian rule. ( Full article...)
Read more...
Refresh with new selections below (purge) 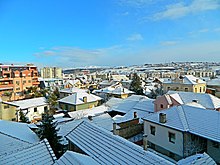 listen) Albanian: Kumanovë); also known by other alternative names) is a city in North Macedonia and the seat of Kumanovo Municipality, the largest municipality in the country. Kumanovo lies 340 metres (1,115 feet) above sea level and is surrounded by the Karadag part of Skopska Crna Gora mountain on its western side, Gradištanska mountain on its southern side, and Mangovica and German mountain on the Eastern side. Skopje airport also serves Kumanovo.

It has many historical sites. One of the most important sites is the 4,000-year-old megalithic astronomical observatory of Kokino, located 30 km (19 mi) northeast of Kumanovo and discovered in 2001. It is ranked fourth on the list of old observatories by NASA.

More in: North Macedonia and Macedonians

... that the capital city of Skopje (see also other names of Skopje) is the hometown of the great humanitarian and Nobel Prize winner, Mother Teresa

... that the Megalithic Observatory, Kokino is more than 3800 years old and it is placed on NASA's list of important ancient observatories [1]

... that the smallest ethno museum in the world is located only 5 km on the northwest of Tetovo, in the picturesque village of Džepčište and as such is listed in the Guinness Book of Records

... about the Stone town, situated by the Kuklica village in the Kratovo area. According to the sources, the stone figures that are called Dolls by the local population, date from the ancient prehistory...

Other Photos of Interest