The Coat of arms of New York state

Location of New York state in the United States

New York is a state in the Mid-Atlantic and Northeastern regions of the United States. It was one of the original thirteen colonies forming the United States. With a total area of 54,556 square miles (141,300 km2), New York is the 27th largest state; its population of more than 20 million people in 2020 makes it the fourth most populous state in the U.S. The state is bordered by New Jersey and Pennsylvania to the south and Connecticut, Massachusetts, and Vermont to the east; it has a maritime border with Rhode Island, east of Long Island, as well as an international border with the Canadian provinces of Quebec to the north and Ontario to the northwest. It is sometimes referred to as New York State to distinguish it from New York City, which is its largest city.

Two-thirds of the state's population lives in the New York metropolitan area. With an estimated population of 8.36 million in 2019, New York City is the most populous city in the United States and the premier gateway for immigration to the United States. The New York City metropolitan area is one of the most populous in the world. A global city, New York City is home to the United Nations Headquarters, and has been described as the cultural, financial, and media capital of the world, as well as the world's most economically powerful city. The next four most populous cities in the state are Buffalo, Rochester, Yonkers, and Syracuse, while the state capital is Albany.

New York has a diverse geography. The southern part of the state is in the Atlantic coastal plain and includes Long Island and several smaller associated islands, as well as New York City and the lower Hudson River Valley. The large Upstate New York region comprises several ranges of the wider Appalachian Mountains, and the Adirondack Mountains in the northeastern lobe of the state. The north–south Hudson River Valley and the east–west Mohawk River Valley bisect these more mountainous regions. Western New York is considered part of the Great Lakes region and borders on Lake Ontario, Lake Erie, and Niagara Falls. The central part of the state is dominated by the Finger Lakes, a popular vacation and tourist destination. ( Full article...) 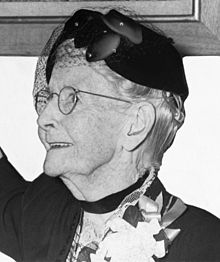 Anna Mary Robertson Moses (September 7, 1860 – December 13, 1961), known by her nickname Grandma Moses, was an American folk artist. She began painting in earnest at the age of 78 and is often cited as an example of an individual who successfully began a career in the arts at an advanced age. Her works have been shown and sold in the United States and abroad and have been marketed on greeting cards and other merchandise. Moses' paintings are displayed in the collections of many museums. Sugaring Off was sold for US$1.2 million in 2006.

Moses appeared on magazine covers, television, and in a documentary of her life. She wrote an autobiography (My Life's History), won numerous awards, and was awarded two honorary doctoral degrees. ( Full article...) 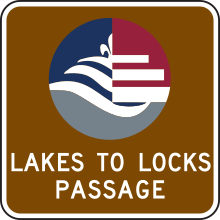 U.S. Route 9 (US 9) is a part of the U.S. Highway System that runs from Laurel, Delaware, to Champlain, New York. In New York, US 9 extends 324.72 miles (522.59 km) from the George Washington Bridge in Manhattan to an interchange with Interstate 87 (I-87) just south of the Canada–United States border in the town of Champlain. US 9 is the longest north–south U.S. Highway in New York; additionally, the portion of US 9 in New York accounts for more than half of the highway's total length.

The highway's passage through the state offers a diverse sample of New York to a traveler, passing through busy urban neighborhoods, suburban strips, and forested wilderness. It is Broadway in Upper Manhattan, the Bronx and much of Westchester County, and uses parts of the old Albany Post Road in the Hudson Valley, where it passes the historic homes of a U.S. President ( Franklin Delano Roosevelt) and Gilded Age heir. It passes the center of New York political power in downtown Albany, and the patrician grandeur of Saratoga Springs. It penetrates into the deep recesses of the Adirondack Park and runs along the shore of Lake Champlain, where it is part of the All-American Road known as the Lakes to Locks Passage. ( Full article...)

The following are images from various New York state-related articles on Wikipedia.

This is a Featured article, which represents some of the best content on English Wikipedia. 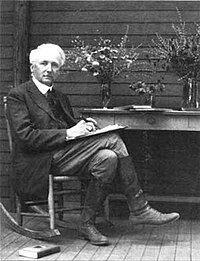 Robert Sterling Yard (February 1, 1861 – May 17, 1945) was an American writer, journalist, and wilderness activist. Born in Haverstraw, New York, Yard graduated from Princeton University and spent the first twenty years of his career in the editing and publishing business. In 1915, he was recruited by his friend Stephen Mather to help publicize the need for an independent national park agency. Their numerous publications were part of a movement that resulted in legislative support for a National Park Service (NPS) in 1916. Yard served as head of the National Parks Educational Committee for several years after its conception, but tension within the NPS led him to concentrate on non-government initiatives. He became executive secretary of the National Parks Association in 1919.

Yard worked to promote the national parks as well as educate Americans about their use. Creating high standards based on aesthetic ideals for park selection, he also opposed commercialism and industrialization of what he called "America's masterpieces". These standards subsequently caused discord with his peers. After helping to establish a relationship between the NPA and the United States Forest Service, Yard later became involved in the protection of wilderness areas. In 1935, he became one of the eight founding members of The Wilderness Society and acted as its first president from 1937 until his death eight years later. Yard is now considered an important figure in the modern wilderness movement. ( Full article...)
edit 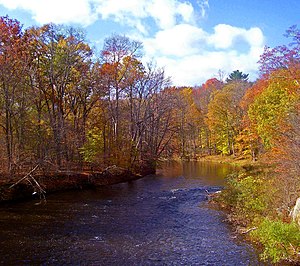 The Shawangunk Kill is a stream that flows northward through Orange, Sullivan and Ulster counties, New York in the United States. It is the largest tributary of the Wallkill River. It takes its name from the neighboring Shawangunk Ridge, where it rises in the Town of Greenville, then flowing down into the valley. For part of its length, it forms the northwestern boundary of Orange County, with first Sullivan and then Ulster along the other side.

More Did you know

Troy is a city on the east bank of the Hudson River located a few miles north of the capital, Albany. Settled in 1707, Troy was incorporated as a village in 1787, as a town in 1791, and finally as a city in 1816. This photo is of Lansingburgh, an area of North Troy, which was founded as a separate town, but incorporated into the city of Troy in 1900. Troy is known as the "Collar City" for being a manufacturing center for shirts, shirtwaists, collars, and cuffs in the late 1800s. This photo is taken from Oakwood Cemetery, burial place of Sam Wilson, the origin of Uncle Sam.