From Wikipedia
https://en.wikipedia.org/wiki/Portal:Myths
Wikipedia portal for content related to Myths

Myth is a folklore genre consisting of narratives that play a fundamental role in a society, such as foundational tales or origin myths. The main characters in myths are usually non-humans, such as gods, demigods, and other supernatural figures. However, others also include humans, animals, or combinations in their classificiation of myth. Stories of everyday human beings, although often of leaders of some type, are usually contained in legends, as opposed to myths. Myths are sometimes distinguished from legends in that myths deal with gods, usually have no historical basis, and are set in a world of the remote past, very different from that of the present.

Myths are often endorsed by rulers and priests or priestesses and are closely linked to religion or spirituality. Many societies group their myths, legends, and history together, considering myths and legends to be true accounts of their remote past. In particular, creation myths take place in a primordial age when the world had not achieved its later form. Other myths explain how a society's customs, institutions, and taboos were established and sanctified. There is a complex relationship between recital of myths and the enactment of rituals.

The term mythology may either refer to the study of myths in general, or a body of myths regarding a particular subject. The study of myth began in ancient history. Rival classes of the Greek myths by Euhemerus, Plato, and Sallustius were developed by the Neoplatonists and later revived by Renaissance mythographers. Today, the study of myth continues in a wide variety of academic fields, including folklore studies, philology, psychology, and anthropology. Moreover, the academic comparisons of bodies of myth are known as comparative mythology.

Since the term myth is widely used to imply that a story is not objectively true, the identification of a narrative as a myth can be highly political: many adherents of religions view their own religion's stories as true and therefore object to those stories being characterised as myths, while seeing the stories of other religions as being myth. Labelling all religious narratives as myths can be thought of as treating different traditions with parity. ( Full article...)

Greek mythology is the body of myths originally told by the ancient Greeks, and a genre of Ancient Greek folklore. These stories concern the origin and nature of the world, the lives and activities of deities, heroes, and mythological creatures, and the origins and significance of the ancient Greeks' own cult and ritual practices. Modern scholars study the myths to shed light on the religious and political institutions of ancient Greece, and to better understand the nature of myth-making itself.

The Greek myths were initially propagated in an oral-poetic tradition most likely by Minoan and Mycenaean singers starting in the 18th century BC; eventually the myths of the heroes of the Trojan War and its aftermath became part of the oral tradition of Homer's epic poems, the Iliad and the Odyssey. Two poems by Homer's near contemporary Hesiod, the Theogony and the Works and Days, contain accounts of the genesis of the world, the succession of divine rulers, the succession of human ages, the origin of human woes, and the origin of sacrificial practices. Myths are also preserved in the Homeric Hymns, in fragments of epic poems of the Epic Cycle, in lyric poems, in the works of the tragedians and comedians of the fifth century BC, in writings of scholars and poets of the Hellenistic Age, and in texts from the time of the Roman Empire by writers such as Plutarch and Pausanias. ( Full article...) 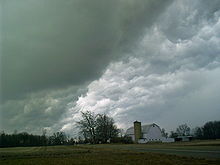 To farmers of eastern Europe, the ala was a demon who led hail and thunderstorms over their fields, ruining their crops.

An ala or hala (plural: ale or hali) is a female mythological creature recorded in the folklore of Bulgarians, Macedonians, and Serbs. Ale are considered demons of bad weather whose main purpose is to lead hail-producing thunderclouds in the direction of fields, vineyards, or orchards to destroy the crops, or loot and take them away. Extremely voracious, ale particularly like to eat children, though their gluttony is not limited to Earth. It is believed they sometimes try devouring the Sun or the Moon, causing eclipses, and that it would mean the end of the world should they succeed. When people encounter an ala, their mental or physical health, or even life, are in peril; however, her favor can be gained by approaching her with respect and trust. Being in a good relationship with an ala is very beneficial, because she makes her favorites rich and saves their lives in times of trouble.

The appearance of an ala is diversely and often vaguely described in folklore. A given ala may look like a black wind, a gigantic creature of indistinct form, a huge-mouthed, humanlike, or snakelike monster, a female dragon, or a raven. An ala may also assume various human or animal shapes, and can even possess a person's body. It is believed that the diversity of appearances described is due to the ala's being a synthesis of a Slavic demon of bad weather and a similar demon of the central Balkans pre-Slavic population. In folk tales with a humanlike ala, her personality is similar to that of the Russian Baba Yaga. Ale are said to live in the clouds, or in a lake, spring, hidden remote place, forest, inhospitable mountain, cave, or gigantic tree. While ale are usually hostile towards humans, they do have other powerful enemies that can defeat them, like dragons. In Christianized tales, St. Elijah takes the dragons' role, but in some cases the saint and the dragons fight ale together. Eagles are also regarded as defenders against ale, chasing them away from fields and thus preventing them from bringing hail clouds overhead. ( Full article...)

The following are images from various myth-related articles on Wikipedia.