listen)) is a state in the Southeastern region of the United States, bordered to the north by Tennessee; to the east by Alabama; to the south by the Gulf of Mexico; to the southwest by Louisiana; and to the northwest by Arkansas. Mississippi's western boundary is largely defined by the Mississippi River. Mississippi is the 32nd largest and 34th-most populous of the 50 U.S. states. Jackson is both the state's capital and largest city. Greater Jackson is the state's most populous metropolitan area, with an estimated population of 580,166 in 2018.

On December 10, 1817, Mississippi became the 20th state admitted to the Union. By 1860, Mississippi was the nation's top cotton-producing state and slaves accounted for 55% of the state population. Mississippi declared its secession from the Union on March 23, 1861, and was one of the seven original Confederate States, which constituted the largest slaveholding states in the nation. Following the Civil War, it was restored to the Union on February 23, 1870.

Until the Great Migration of the 1930s, African Americans were a majority of Mississippi's population. Mississippi was the site of many prominent events during the civil rights movement, including the Ole Miss riot of 1962 by white students objecting to desegregation, the 1963 assassination of Medgar Evers, and the 1964 Freedom Summer murders of three activists working on voting rights. Mississippi frequently ranks low among the U.S. in measures of health, education, and development, and high in measures of poverty. In 2010, 37.3% of Mississippi's population was African American, the highest percentage of any state.

Mississippi is almost entirely within the Gulf coastal plain, and generally consists of lowland plains and low hills. The northwest remainder of the state consists of the Mississippi Delta, a section of the Mississippi Alluvial Plain. Mississippi's highest point is Woodall Mountain at 807 feet (246 m) above sea level adjacent to the Cumberland Plateau; the lowest is the Gulf of Mexico. Mississippi has a humid subtropical climate classification. ( Full article...) 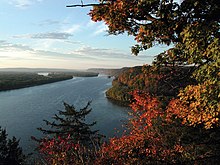 The Mississippi River is the second-longest river and chief river of the second-largest drainage system on the North American continent, second only to the Hudson Bay drainage system. From its traditional source of Lake Itasca in northern Minnesota, it flows generally south for 2,320 miles (3,730 km) to the Mississippi River Delta in the Gulf of Mexico. With its many tributaries, the Mississippi's watershed drains all or parts of 32 U.S. states and two Canadian provinces between the Rocky and Appalachian mountains. The main stem is entirely within the United States; the total drainage basin is 1,151,000 sq mi (2,980,000 km2), of which only about one percent is in Canada. The Mississippi ranks as the fourteenth-largest river by discharge in the world. The river either borders or passes through the states of Minnesota, Wisconsin, Iowa, Illinois, Missouri, Kentucky, Tennessee, Arkansas, Mississippi, and Louisiana.

Native Americans have lived along the Mississippi River and its tributaries for thousands of years. Most were hunter-gatherers, but some, such as the Mound Builders, formed prolific agricultural and urban civilizations. The arrival of Europeans in the 16th century changed the native way of life as first explorers, then settlers, ventured into the basin in increasing numbers. The river served first as a barrier, forming borders for New Spain, New France, and the early United States, and then as a vital transportation artery and communications link. In the 19th century, during the height of the ideology of manifest destiny, the Mississippi and several western tributaries, most notably the Missouri, formed pathways for the western expansion of the United States.

Formed from thick layers of the river's silt deposits, the Mississippi embayment is one of the most fertile regions of the United States; steamboats were widely used in the 19th and early 20th centuries to ship agricultural and industrial goods. During the American Civil War, the Mississippi's capture by Union forces marked a turning point towards victory, due to the river's strategic importance to the Confederate war effort. Because of the substantial growth of cities and the larger ships and barges that replaced steamboats, the first decades of the 20th century saw the construction of massive engineering works such as levees, locks and dams, often built in combination. A major focus of this work has been to prevent the lower Mississippi from shifting into the channel of the Atchafalaya River and bypassing New Orleans. ( Full article...) 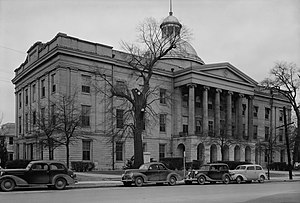