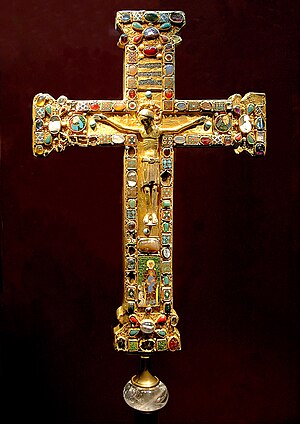 The Cross of Mathilde, a crux gemmata made for Mathilde, Abbess of Essen (973–1011), who is shown kneeling before the Virgin and Child in the enamel plaque. The figure of Christ is slightly later. Probably made in Cologne or Essen, the cross demonstrates several medieval techniques: cast figurative sculpture, filigree, enamelling, gem polishing and setting, and the reuse of Classical cameos and engraved gems.

Population decline, counterurbanisation, the collapse of centralized authority, invasions, and mass migrations of tribes, which had begun in Late Antiquity, continued in the Early Middle Ages. The large-scale movements of the Migration Period, including various Germanic peoples, formed new kingdoms in what remained of the Western Roman Empire. In the 7th century, North Africa and the Middle East—once part of the Byzantine Empire—came under the rule of the Umayyad Caliphate, an Islamic empire, after conquest by Muhammad's successors. Although there were substantial changes in society and political structures, the break with classical antiquity was not complete. The still-sizeable Byzantine Empire, Rome's direct continuation, survived in the Eastern Mediterranean and remained a major power. The empire's law code, the Corpus Juris Civilis or "Code of Justinian", was rediscovered in Northern Italy in the 11th century. In the West, most kingdoms incorporated the few extant Roman institutions. Monasteries were founded as campaigns to Christianise pagan Europe continued. The Franks, under the Carolingian dynasty, briefly established the Carolingian Empire during the later 8th and early 9th centuries. It covered much of Western Europe but later succumbed to the pressures of internal civil wars combined with external invasions: Vikings from the north, Magyars from the east, and Saracens from the south.

During the High Middle Ages, which began after 1000, the population of Europe increased greatly as technological and agricultural innovations allowed trade to flourish and the Medieval Warm Period climate change allowed crop yields to increase. Manorialism, the organisation of peasants into villages that owed rent and labour services to the nobles, and feudalism, the political structure whereby knights and lower-status nobles owed military service to their overlords in return for the right to rent from lands and manors, were two of the ways society was organised in the High Middle Ages. The Crusades, first preached in 1095, were military attempts by Western European Christians to regain control of the Holy Land from Muslims. Kings became the heads of centralised nation-states, reducing crime and violence but making the ideal of a unified Christendom more distant. Intellectual life was marked by scholasticism, a philosophy that emphasised joining faith to reason, and by the founding of universities. The theology of Thomas Aquinas, the paintings of Giotto, the poetry of Dante and Chaucer, the travels of Marco Polo, and the Gothic architecture of cathedrals such as Chartres are among the outstanding achievements toward the end of this period and into the Late Middle Ages.

The Late Middle Ages was marked by difficulties and calamities including famine, plague, and war, which significantly diminished the population of Europe; between 1347 and 1350, the Black Death killed about a third of Europeans. Controversy, heresy, and the Western Schism within the Catholic Church paralleled the interstate conflict, civil strife, and peasant revolts that occurred in the kingdoms. Cultural and technological developments transformed European society, concluding the Late Middle Ages and beginning the early modern period. ( Full article...)

The Norman conquest of England was the invasion and occupation of England by an army of Normans and French led by Duke William II of Normandy in the 11th century. William, who defeated King Harold II of England on 14 October 1066, at the Battle of Hastings, was crowned king at London on Christmas Day, 1066. He then consolidated his control and settled many of his followers in England, introducing a number of governmental and societal changes.

William's claim to the English throne derived from his familial relationship with the childless King Edward the Confessor, who may have encouraged William's hopes for the throne. But when Edward died in January 1066, he was succeeded by his brother-in-law Harold, who not only faced challenges from William but also another claim by the Norwegian king, Harald Hardrada. Hardrada invaded northern England in September 1066 and was victorious at the Battle of Fulford before being defeated and killed by King Harold at the Battle of Stamford Bridge on 25 September 1066. William, however, had landed in southern England, and Harold quickly marched south to confront William, leaving many of his forces behind in the north. On 14 October Harold's army confronted William's invaders near Hastings and after an all-day battle, was defeated and Harold was killed.

Although William's main rivals were gone, he still faced a number of rebellions over the following years, and it was not until after 1072 that he was secure on his throne. Native resistance led to a number of the English elite having their lands confiscated, and some of them went into exile. In order to control his new kingdom, William gave lands to his followers and built castles throughout the land to command military strongpoints. Other changes included the introduction of Norman French as the language of the noble elite, the court and government, and changes in the composition of the upper classes, as William enfeoffed lands to be held directly of the king. More slowly the conquest eventually changed the agricultural classes and village life: the main immediate change appears to have been the formal elimination of slavery, which may or may not have been linked to the invasion. There was little change in the structure of government, with the new Norman administrators taking over many of the forms of Anglo-Saxon government. 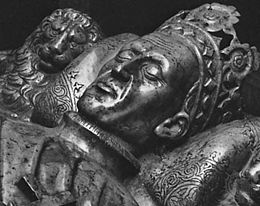 Władysław II Jagiełło ( help· info) [nb 1] (ca. 1351/1362 – 1 June 1434) was Grand Duke of Lithuania (1377–1434), jure uxoris King of Kingdom of Poland (1386–1399), and sole King of Poland (1399–1434). He ruled in Lithuania from 1377, at first with his uncle Kęstutis. In 1386 in Kraków he was baptized as Władysław, married the young queen regnant Jadwiga of Poland, and was crowned King of Poland as Władysław II Jagiełło. In 1387 he converted Lithuania to Christianity. His own reign in Poland started in 1399, upon death of Queen Jadwiga, and lasted a further thirty-five years and laid the foundation for the centuries-long Polish–Lithuanian union. Władysław II was the founder of the Jagiellon dynasty that bears his name, while pagan Jogaila was an heir to the already established house of Gediminids in Grand Duchy of Lithuania; the royal dynasty ruled both states until 1572, [nb 2] and became one of the most influential dynasties in the late medieval and early modern Central and Eastern Europe. During his reign Polish-Lithuanian state was the greatest Kingdom of the Christian world. [1]

Jogaila was the last pagan ruler of medieval Lithuania. After he became King of Poland, as a result of Union of Krewo, the newly formed Polish-Lithuanian union confronted the growing power of the Teutonic Knights. The allied victory at the Battle of Grunwald in 1410, followed by the Peace of Thorn (1411), secured the Polish and Lithuanian borders and marked the emergence of the Polish–Lithuanian alliance as a significant force in Europe. The reign of Władysław II Jagiełło extended Polish frontiers and is often considered the beginning of Poland's Golden Age. (Read more. . .)

The Lindisfarne Gospels is an illuminated Latin manuscript of the gospels of Matthew, Mark, Luke and John. The manuscript was produced on Lindisfarne in Northumbria in the late 7th century or early 8th century, and is generally regarded as the finest example of the kingdom's unique style of religious art, a style that combined Anglo-Saxon and Celtic themes, what is now called Hiberno-Saxon art, or Insular art.