From Wikipedia
https://en.wikipedia.org/wiki/Portal:Mesoamerica
Wikipedia portal for content related to Mesoamerica

Mesoamerica ( Spanish: Mesoamérica) is a region and cultural area in the Americas, extending approximately from central Mexico to Belize, Guatemala, El Salvador, Honduras, Nicaragua, and Costa Rica, within which a number of pre-Columbian societies flourished before the Spanish colonization of the Americas in the 15th and 16th centuries.

As a cultural area, Mesoamerica is defined by a mosaic of cultural traits developed and shared by its indigenous cultures. Beginning as early as 7000 BC the domestication of maize, beans, squash and chili, as well as the turkey and dog, caused a transition from paleo-Indian hunter-gatherer tribal grouping to the organization of sedentary agricultural villages. In the subsequent formative period, agriculture and cultural traits such as a complex mythological and religious tradition, a vigesimal numeric system, and a complex calendric system, a tradition of ball playing, and a distinct architectural style, were diffused through the area. Also in this period villages began to become socially stratified and develop into chiefdoms with the development of large ceremonial centers, interconnected by a network of trade routes for the exchange of luxury goods such as obsidian, jade, cacao, cinnabar, Spondylus shells, hematite, and ceramics. While Mesoamerican civilization did know of the wheel and basic metallurgy, neither of these technologies became culturally important.

Among the earliest complex civilizations was the Olmec culture which inhabited the Gulf coast of Mexico. In the Preclassic period, complex urban polities began to develop among the Maya and the Zapotecs. During this period the first true Mesoamerican writing systems were developed in the Epi-Olmec and the Zapotec cultures, and the Mesoamerican writing tradition reached its height in the Classic Maya Hieroglyphic script. Mesoamerica is one of only five regions of the world where writing was independently developed. In Central Mexico, the height of the Classic period saw the ascendancy of the city of Teotihuacan, which formed a military and commercial empire whose political influence stretched south into the Maya area and northward. During the Epi-Classic period the Nahua peoples began moving south into Mesoamerica from the North. During the early post-Classic period Central Mexico was dominated by the Toltec culture, Oaxaca by the Mixtec, and the lowland Maya area had important centers at Chichén Itzá and Mayapán. Towards the end of the post-Classic period the Aztecs of Central Mexico built a tributary empire covering most of central Mesoamerica.

The Olmec were the first major civilization in Mexico. They lived in the tropical lowlands of south-central Mexico, in the modern-day states of Veracruz and Tabasco.

The Olmec flourished during Mesoamerica's Formative period, dating roughly from as early as 1500 BCE to about 400 BCE. Pre-Olmec cultures had flourished in the area since about 2500 BCE, but by 1600–1500 BCE Early Olmec culture had emerged centered on the San Lorenzo Tenochtitlán site near the coast in southeast Veracruz. They were the first Mesoamerican civilization and laid many of the foundations for the civilizations that followed. Among other "firsts", the Olmec appeared to practice ritual bloodletting and played the Mesoamerican ballgame, hallmarks of nearly all subsequent Mesoamerican societies.

The most familiar aspect of the Olmecs is their artwork, particularly the aptly named " colossal heads". The Olmec civilization was first defined through artifacts which collectors purchased on the pre-Columbian art market in the late 19th century and early 20th century. Olmec artworks are considered among ancient America's most striking. 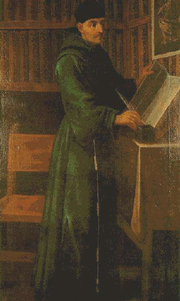 Bernardino de Sahagún (1499 – October 23, 1590) was a Franciscan friar, missionary priest and pioneering ethnographer who participated in the Catholic evangelization of colonial New Spain (now Mexico). Born in Sahagún, Spain, in 1499, he journeyed to New Spain in 1529, and spent more than 50 years conducting interviews regarding Aztec beliefs, culture and history. Though he primarily dedicated himself to the missionary task, his extraordinary work documenting indigenous worldview and culture has earned him the title “the first anthropologist.” He also contributed to the description of the Aztec language Nahuatl, into which he translated the Psalms, the Gospels and a basic manual of religious education.

Sahagún is perhaps best known as the author of Historia general de las cosas de la Nueva España (in English: General History of the Things of New Spain (hereinafter referred to as Historia General). The most famous extant manuscript of the Historia General is the Florentine Codex. It consists of 2400 pages organized into twelve books with approximately 2,000 illustrations drawn by native artists using European techniques. The text in Spanish and Nahuatl documents the culture, religious cosmology (worldview), ritual practices, society, economics, and history of the Aztec people. In the process of putting together the Historia general, Bernardino pioneered new methods for gathering ethnographic information and validating its accuracy. The Historia general has been called “one of the most remarkable accounts of a non-Western culture ever composed,” and Bernardino has been called the father of American ethnography.

Olmec figurines were produced by the Preclassic inhabitants of Mesoamerica. Although not all were produced in the Olmec heartland, they bear the hallmarks and motifs of Olmec culture. Most are simple in design, often nude or with a minimum of clothing, and made of local terracotta. More durable and better known by the general public are those carved from jade and other stones.