A map is a symbolic depiction emphasizing relationships between elements of some space, such as objects, regions, or themes.

Many maps are static, fixed to paper or some other durable medium, while others are dynamic or interactive. Although most commonly used to depict geography, maps may represent any space, real or fictional, without regard to context or scale, such as in brain mapping, DNA mapping, or computer network topology mapping. The space being mapped may be two dimensional, such as the surface of the earth, three dimensional, such as the interior of the earth, or even more abstract spaces of any dimension, such as arise in modeling phenomena having many independent variables.

Although the earliest maps known are of the heavens, geographic maps of territory have a very long tradition and exist from ancient times. The word "map" comes from the medieval Latin Mappa mundi, wherein mappa meant napkin or cloth and mundi the world. Thus, "map" became a shortened term referring to a two-dimensional representation of the surface of the world. ( Full article...)

More about Maps...
Refresh with new selections below (purge)
edit 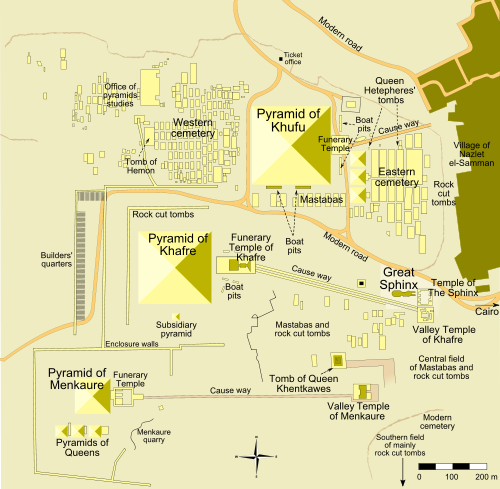 Map of the Giza pyramid complex, located 20 km (12.5 mi) southwest of Cairo, Egypt. This Ancient Egyptian necropolis consists of the Great Pyramid, the Pyramid of Khafre, and the Pyramid of Menkaure, along with a number of smaller satellite edifices, known as "queens" pyramids, causeways and valley pyramids, and most noticeably the Great Sphinx. The site has attracted visitors and tourists since classical antiquity, when these Old Kingdom monuments were already over 2,000 years old.
edit 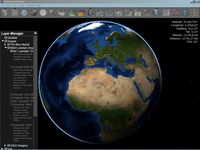 A virtual globe is a 3D software model or representation of the Earth or another world. A virtual globe provides the user with the ability to freely move around in the virtual environment by changing the viewing angle and position. Compared to a conventional globe, virtual globes have the additional capability of representing many different views on the surface of the Earth. These views may be of geographical features, man-made features such as roads and buildings or abstract representations of demographic quantities such as population. The first widely publicized virtual globe was Google Earth.

Virtual globes may be used for study or navigation (by connecting to a GPS device) and their design varies considerably according to their purpose. Those wishing to portray a visually accurate representation of the Earth often use satellite image servers and are capable not only of rotation but also zooming and sometimes horizon tilting.

Captain James Cook FRS RN (27 October 1728 ( O.S.) – 14 February 1779) was an English explorer, navigator and cartographer. Ultimately rising to the rank of Captain in the Royal Navy, Cook was the first to map Newfoundland prior to making three voyages to the Pacific Ocean during which he achieved the first European contact with the eastern coastline of Australia, the European discovery of the Hawaiian Islands, and the first recorded circumnavigation of New Zealand.

Cook accurately charted many areas and recorded several islands and coastlines on Europeans' maps for the first time. His achievements can be attributed to a combination of seamanship, superior surveying and cartographic skills, courage in exploring dangerous locations to confirm the facts, an ability to lead men in adverse conditions, and boldness both with regard to the extent of his explorations and his willingness to exceed the instructions given to him by the Admiralty.

Find a map by geographic area or type