From Wikipedia
https://en.wikipedia.org/wiki/Portal:Kashmir
The Kashmir Portal

The Himalayas as seen from Leh, Ladakh, Kashmir 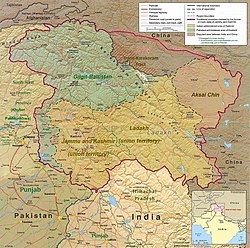 In the first half of the first millennium, the Kashmir region became an important centre of Hinduism and later of Buddhism; later still, in the ninth century, Kashmir Shaivism arose. In 1339, Shah Mir became the first Muslim ruler of Kashmir, inaugurating the Salatin-i-Kashmir or Shah Mir dynasty. The region was part of the Mughal Empire from 1586 to 1751, and thereafter, until 1820, of the Afghan Durrani Empire. That year, the Sikh Empire, under Ranjit Singh, annexed Kashmir. In 1846, after the Sikh defeat in the First Anglo-Sikh War, and upon the purchase of the region from the British under the Treaty of Amritsar, the Raja of Jammu, Gulab Singh, became the new ruler of Kashmir. The rule of his descendants, under the paramountcy (or tutelage) of the British Crown, lasted until the Partition of India in 1947, when the former princely state of the British Indian Empire became a disputed territory, now administered by three countries: India, Pakistan, and China. ( Full article...)

8 June 2021 – India-Pakistan relations, Kashmir conflict
Pakistan asked India to reverse its “unlawful and destabilizing actions” in Kashmir as a result of large scale movement of Indian army forces into the disputed region. Tension between the states have been high since Narendra Modi stripped Jammu and Kashmir of its autonomy in August 2019. There is concern that the territory would be further partitioned into the state of Jammu and union territory of Kashmir. (Deccan Herald)
15 May 2021 – Protests over the 2021 Israel–Palestine crisis
The Jammu and Kashmir Police arrest 21 people in Kashmir, India, for organizing protests in support of Palestine. (ThePrint)
27 April 2021 – COVID-19 pandemic
Pakistan's National Command and Operation Centre announces a ban on all tourism between May 8 and May 16 following a third wave of COVID-19. The country also bans all intercity and interprovincial travel during the Eid al-Fitr holidays, with the exception of travel within Gilgit-Baltistan. (The News)
23 April 2021 – Israeli-Palestinian conflict
More than 120 people are injured in clashes in Jerusalem between ultra-nationalist Jewish demonstrators (including Lehava extremists), Palestinian protestors, and Israel Police in response to a TikTok video showing Palestinians assaulting members of the Jerusalem ultra-Orthodox community. (BBC)