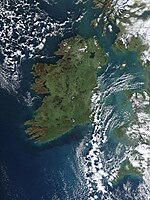 listen); Ulster-Scots: Airlann [ˈɑːrlən]) is an island in the North Atlantic. It is separated from Great Britain to its east by the North Channel, the Irish Sea, and St George's Channel. Ireland is the second-largest island of the British Isles, the third-largest in Europe, and the twentieth-largest on Earth.

Geopolitically, Ireland is divided between the Republic of Ireland (officially named Ireland), which covers five-sixths of the island, and Northern Ireland, which is part of the United Kingdom. In 2011, the population of Ireland was about 6.6 million, ranking it the second-most populous island in Europe after Great Britain. As of 2016, 4.8 million lived in the Republic of Ireland, and 1.8 million in Northern Ireland.

The geography of Ireland comprises relatively low-lying mountains surrounding a central plain, with several navigable rivers extending inland. Its lush vegetation is a product of its mild but changeable climate which is free of extremes in temperature. Much of Ireland was woodland until the end of the Middle Ages. Today, woodland makes up about 10% of the island, compared with a European average of over 33%, and most of it is non-native conifer plantations. There are twenty-six extant land mammal species native to Ireland. The Irish climate is influenced by the Atlantic Ocean and thus very moderate, and winters are milder than expected for such a northerly area, although summers are cooler than those in continental Europe. Rainfall and cloud cover are abundant. ( Full article...) 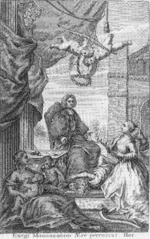 Drapier's Letters is the collective name for a series of seven pamphlets written between 1724 and 1725 by Jonathan Swift to arouse public opinion in Ireland against the imposition of a privately minted copper coinage which Swift believed to be of inferior quality. William Wood was granted letters patent to mint the coin, and Swift saw the licensing of the patent as corrupt. In response, Swift represented Ireland as constitutionally and financially independent of Britain in the Drapier's Letters. Because it was a politically sensitive subject, Swift wrote under the pseudonym M. B. Drapier and the Drapier's Letters are seen as the most important of Swift's "Irish tracts."

Although the letters were condemned by the Irish government, with prompting from the British government, they inspired popular sentiment against Wood and his patent. This turned into a nationwide boycott, which forced the patent to be withdrawn; Swift was later honoured for this service to the people of Ireland. Many Irish people recognized Swift as a hero for his defiance of British control over the Irish nation. Beyond being a hero, many critics have seen Swift, through the persona of the Drapier, as the first to organize a "more universal Irish community", although it is disputed as to who constitutes that community.

The first complete collection of the Drapier's Letters appeared in the 1734 George Faulkner edition of the Works of Jonathan Swift along with an allegorical frontispiece offering praise and thanks from the Irish people. Some of Swift's other political writings are Gulliver's Travels, A Tale of a Tub, and A Modest Proposal. Read more... 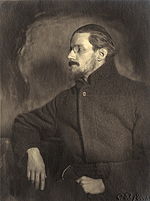 James Augustine Aloysius Joyce (2 February 1882 – 13 January 1941) was an Irish expatriate writer, widely considered to be one of the most influential writers of the 20th century. He is best known for his landmark novel Ulysses (1922) and its highly controversial successor Finnegans Wake (1939), as well as the short story collection Dubliners (1914) and the semi-autobiographical novel A Portrait of the Artist as a Young Man (1916).

Although he spent most of his adult life outside Ireland, Joyce's psychological and fictional universe is firmly rooted in his native Dublin, the city which provides the settings and much of the subject matter for all his fiction. In particular, his tempestuous early relationship with the Irish Roman Catholic Church is reflected through a similar inner conflict in his recurrent alter ego Stephen Dedalus. As the result of his minute attentiveness to a personal locale and his self-imposed exile and influence throughout Europe, (notably in Paris, France), Joyce became paradoxically one of the most cosmopolitan yet one of the most regionally-focused of all the English language writers of his time. Read more...

The following are images from various Ireland-related articles on Wikipedia.

Belfast ( /ˈbɛlfɑːst/ BEL-fahst; from Irish: Béal Feirste, meaning 'mouth of the sand-bank ford', Irish pronunciation:  [bʲeːlˠ ˈfʲɛɾˠ(ə)ʃtʲə]) is the capital and largest city of Northern Ireland, standing on the banks of the River Lagan on the east coast. It is the 12th-largest city in the United Kingdom and the second-largest in Ireland. It had a population of 343,542 . Belfast suffered greatly during the violence that accompanied the partition of Ireland, and especially during the more recent conflict known as the Troubles.

By the early 19th century, Belfast was a major port. It played an important role in the Industrial Revolution in Ireland, becoming briefly the biggest linen-producer in the world, earning it the nickname " Linenopolis". By the time it was granted city status in 1888, it was a major centre of Irish linen production, tobacco-processing and rope-making. Shipbuilding was also a key industry; the Harland and Wolff shipyard, which built the RMS Titanic, was the world's largest shipyard. Belfast has a major aerospace and missiles industry. Industrialisation, and the inward migration it brought, made Belfast Northern Ireland's biggest city. Following the partition of Ireland in 1922, Belfast became the seat of government for Northern Ireland. Belfast's status as a global industrial centre ended in the decades after the Second World War. ( Full article...)

In the News articles