Iraq ( Arabic: ٱلْعِرَاق‎, al-ʿIrāq; Kurdish: عێراق‎ Êraq), officially the Republic of Iraq ( Arabic: جُمْهُورِيَّة ٱلْعِرَاق‎ Jumhūriīyah al-ʿIrāq; Kurdish: کۆماری عێراق‎ Komarî Êraq), is a country in Western Asia, bordered by Turkey to the north, Iran to the east, Kuwait to the southeast, Saudi Arabia to the south, Jordan to the southwest and Syria to the west. The capital and largest city is Baghdad. Iraq is home to diverse ethnic groups including Arabs, Kurds, Turkmens, Assyrians, Yazidis, Shabakis, Armenians, Sabian-Mandaeans, Circassians, and Kawliya. Around 95-98% of the country's 38 million citizens are Muslims, with small minorities of Christians, Yarsans, Yezidis and Mandaeans also present. The official languages of Iraq are Arabic and Kurdish.

Iraq has a coastline measuring 58 km (36 miles) on the northern Persian Gulf and encompasses the Mesopotamian Alluvial Plain, the northwestern end of the Zagros mountain range and the eastern part of the Syrian Desert. Two major rivers, the Tigris and Euphrates, run south through Iraq and into the Shatt al-Arab near the Persian Gulf. These rivers provide Iraq with significant amounts of fertile land. The region between the Tigris and Euphrates rivers, historically known as Mesopotamia, is often referred to as the cradle of civilisation. It was here that mankind first began to read, write, create laws and live in cities under an organised government—notably Uruk, from which "Iraq" is derived. The area has been home to successive civilisations since the 6th millennium BC. Iraq was the centre of the Akkadian, Sumerian, Assyrian and Babylonian empires. It was also part of the Median, Achaemenid, Hellenistic, Parthian, Sassanid, Roman, Rashidun, Umayyad, Abbasid, Ayyubid, Seljuk, Mongol, Timurid, Safavid, Afsharid and Ottoman empires.

The country today known as Iraq was a region of the Ottoman Empire until the partition of the Ottoman Empire in the 20th century. It was made up of three provinces, called vilayets in the Ottoman Turkish language: Mosul Vilayet, Baghdad Vilayet, and Basra Vilayet. In April 1920 the British Mandate of Mesopotamia was created under the authority of the League of Nations. A British-backed monarchy joining these vilayets into one Kingdom was established in 1921 under Faisal I of Iraq. The Hashemite Kingdom of Iraq gained independence from the UK in 1932. In 1958, the monarchy was overthrown and the Iraqi Republic created. Iraq was controlled by the Arab Socialist Ba'ath Party from 1968 until 2003. In 1980, Iraq invaded Iran, sparking a protracted war which would last for almost eight years, and end in a stalemate with devastating losses for both countries.

After an invasion by the United States and its allies in 2003, Saddam Hussein's Ba'ath Party was removed from power, and multi-party parliamentary elections were held in 2005. The US presence in Iraq ended in 2011, but the Iraqi insurgency continued and intensified as fighters from the Syrian civil war spilled into the country. Out of the insurgency came a highly destructive group calling itself ISIL, which took large parts of the north and west. It has since been largely defeated. Disputes over the sovereignty of Kurdistan Region continue. A referendum about the full sovereignty of Kurdistan Region was held on 25 September 2017. On 9 December 2017, then- Iraqi Prime Minister Haider al-Abadi declared victory over ISIL after the group lost its territory in Iraq.

Iraq is a federal parliamentary republic consisting of 19 governorates, four of which make up the autonomous Kurdistan Region. The country's official religion is Islam. Culturally, Iraq has a very rich heritage and celebrates the achievements of its past in both pre-Islamic as well as post-Islamic times and is known for its poets. Its painters and sculptors are among the best in the Arab world, some of them being world-class as well as producing fine handicrafts, including rugs and carpets. Iraq is a founding member of the UN as well as of the Arab League, OIC, Non-Aligned Movement and the IMF. ( Full article...)

More about Iraq...
Refresh with new selections below (purge) 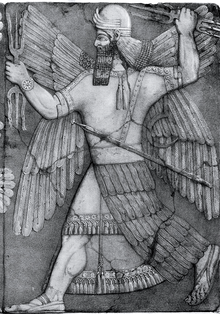 Assyrian stone relief from the temple of Ninurta at Kalhu, showing the god with his thunderbolts pursuing Anzû, who has stolen the Tablet of Destinies from Enlil's sanctuary ( Austen Henry Layard Monuments of Nineveh, 2nd Series, 1853)

Ninurta ( Sumerian: 𒀭𒊩𒌆𒅁: D NIN. URTA, meaning of this name not known), also known as Ninĝirsu ( Sumerian: 𒀭𒊩𒌆𒄈𒋢: D NIN. ĜIR2.SU, meaning “Lord of Girsu”), is an ancient Mesopotamian god associated with farming, healing, hunting, law, scribes, and war who was first worshipped in early Sumer. In the earliest records, he is a god of agriculture and healing, who releases humans from sickness and the power of demons. In later times, as Mesopotamia grew more militarized, he became a warrior deity, though he retained many of his earlier agricultural attributes. He was regarded as the son of the chief god Enlil and his main cult center in Sumer was the Eshumesha temple in Nippur. Ninĝirsu was honored by King Gudea of Lagash (ruled 2144–2124 BC), who rebuilt Ninĝirsu's temple in Lagash.

Later, Ninurta became beloved by the Assyrians as a formidable warrior. The Assyrian king Ashurnasirpal II (ruled 883–859 BC) built a massive temple for him at Kalhu, which became his most important cult center from then on. After the fall of the Assyrian Empire, Ninurta's statues were torn down and his temples abandoned because he had become too closely associated with the Assyrian regime, which many conquered peoples saw as tyrannical and oppressive. ( Full article...)
edit

The Euphrates through Iraq

Abū ʿAbd Allāh Muḥammad ibn Jaʿfar ( Arabic: أبو عبد الله محمد بن جعفر‎; 847 – 16 July 869), better known by his regnal title al-Muʿtazz bi-ʾllāh (المعتز بالله, "He who is strengthened by God") was the Abbasid caliph from 866 to 869, during a period of extreme internal instability within the Abbasid Caliphate, known as the " Anarchy at Samarra".

Originally named as the second in line of three heirs of his father al-Mutawakkil, al-Mu'tazz was forced to renounce his rights after the accession of his brother al-Muntasir, and was thrown in prison as a dangerous rival during the reign of his cousin al-Musta'in. He was released and raised to the caliphate in January 866, during the civil war between al-Musta'in and the Turkish military of Samarra. Al-Mu'tazz was capable and determined to reassert the authority of the caliph over the Turkish military, but had only limited success. Aided by the vizier Ahmad ibn Isra'il, he managed to remove and kill the leading Turkish generals, Wasif al-Turki and Bugha al-Saghir, but the decline of the Tahirids in Baghdad deprived him of their role as a counterweight to the Turks. Faced with the assertive Turkish commander Salih ibn Wasif, and unable to find money to satisfy the demands of his troops, he was deposed and died of ill treatment a few days later, on 16 July 869. ( Full article...)

The following are images from various Iraq-related articles on Wikipedia.
edit