Coat of Arms of Hungary

listen)) is a landlocked country in Central Europe. Spanning 93,030 square kilometres (35,920 sq mi) of the Carpathian Basin, it is bordered by Slovakia to the north, Ukraine to the northeast, Romania to the east and southeast, Serbia to the south, Croatia and Slovenia to the southwest, and Austria to the west. Hungary has a population of 10 million, mostly ethnic Hungarians and a significant Romani minority. Hungarian, the official language, is the world's most widely spoken Uralic language, and among the few non- Indo-European languages widely spoken in Europe. Budapest is the country's capital and largest city; other major urban areas include Debrecen, Szeged, Miskolc, Pécs, and Győr.

The territory of present-day Hungary has for centuries been a crossroads for various peoples, including Celts, Romans, Germanic tribes, Huns, West Slavs and the Avars. The foundations of the Hungarian state were established in the late ninth century AD with the conquest of the Carpathian Basin by Hungarian grand prince Árpád. His great-grandson Stephen I ascended the throne in 1000, converting his realm to a Christian kingdom. By the 12th century, Hungary became a regional power, reaching its cultural and political height in the 15th century. Following the Battle of Mohács in 1526, it was partially occupied by the Ottoman Empire (1541–1699). Hungary came under Habsburg rule at the turn of the 18th century, later joining with the Austrian Empire to form Austria-Hungary, a major power into the early 20th century.

Austria-Hungary collapsed after World War I, and the subsequent Treaty of Trianon established Hungary's current borders, resulting in the loss of 71% of its territory, 58% of its population, and 32% of ethnic Hungarians. Following the tumultuous interwar period, Hungary joined the Axis Powers in World War II, suffering significant damage and casualties. Postwar Hungary became a satellite state of the Soviet Union, leading to the establishment of the Hungarian People's Republic. Following the failed 1956 revolution, Hungary became a comparatively freer, though still repressive, member of the Eastern Bloc. The removal of Hungary's border fence with Austria accelerated the collapse of the Eastern Bloc, and subsequently the Soviet Union. On 23 October 1989, Hungary became a democratic parliamentary republic. Hungary joined the European Union in 2004 and has been part of the Schengen Area since 2007.

Hungary is a middle power in international affairs, owing mostly to its cultural and economic influence. It has a high-income economy and ranks "very high" in the Human Development Index, with citizens enjoying universal health care and tuition-free secondary education. Hungary has a long history of significant contributions to arts, music, literature, sports, science and technology. It is the thirteenth-most popular tourist destination in Europe, drawing 15.8 million international tourists in 2017. It is a member of numerous international organisations, including the United Nations, NATO, WTO, World Bank, IIB, the AIIB, the Council of Europe, and the Visegrád Group. ( Full article...)

This is a Featured article, which represents some of the best content on English Wikipedia.. 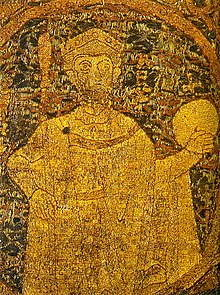 Portrayal of Stephen I on the Hungarian coronation pall from 1031

Stephen I, also known as King Saint Stephen ( Hungarian: Szent István király [ˌsænt ˈiʃtvaːn kiraːj]; Latin: Sanctus Stephanus; Slovak: Štefan I. or Štefan Veľký; c. 975 – 15 August 1038), was the last Grand Prince of the Hungarians between 997 and 1000 or 1001, and the first King of Hungary from 1000 or 1001, until his death in 1038. The year of his birth is uncertain, but many details of his life suggest that he was born in, or after, 975, in Esztergom. At his birth, he was given the pagan name Vajk. The date of his baptism is unknown. He was the only son of Grand Prince Géza and his wife, Sarolt, who was descended from a prominent family of gyulas. Although both of his parents were baptized, Stephen was the first member of his family to become a devout Christian. He married Gisela of Bavaria, a scion of the imperial Ottonian dynasty.

After succeeding his father in 997, Stephen had to fight for the throne against his relative, Koppány, who was supported by large numbers of pagan warriors. He defeated Koppány with the assistance of foreign knights including Vecelin, Hont and Pázmány, and native lords. He was crowned on 25 December 1000 or 1 January 1001 with a crown sent by Pope Sylvester II. In a series of wars against semi-independent tribes and chieftains—including the Black Hungarians and his uncle, Gyula the Younger—he unified the Carpathian Basin. He protected the independence of his kingdom by forcing the invading troops of Conrad II, Holy Roman Emperor, to withdraw from Hungary in 1030. ( Full article...)

Emblem of the Hungarian Defence Forces

The Hungarian Defence Forces ( Hungarian: Magyar Honvédség) is the national defence force of Hungary. Since 2007, the Hungarian Armed Forces is under a unified command structure. The Ministry of Defence maintains the political and civil control over the army. A subordinate Joint Forces Command is coordinating and commanding the HDF corps. In 2020, the armed forces had 22,700 personnel on active duty. In 2019, military spending was $1.904 billion, about 1.22% of the country's GDP, well below the NATO target of 2%. In 2016, the government adopted a resolution in which it pledged to increase defence spending to 2.0% of GDP and the number of active personnel to 37,650 by 2026.

Military service is voluntary, though conscription may occur in wartime. In a significant move for modernization, Hungary decided in 2001 to buy 14 JAS 39 Gripen fighter aircraft for about 800 million EUR. Hungary bought two used Airbus A319 and two Falcon 7X transport aircraft. Three C-17 III Globemaster transport aircraft are operating from Pápa Air Base under Hungarian nationality mark but are maintained by the NATO Heavy Airlift Wing (HAW). In 2017 Hungary signed a contract to buy 20 new Airbus military helicopters and ground attack bombs for the Gripens. Hungarian National Cyber Security Center was re-organized in 2016. ( Full article...)
edit

The Báthory coat-of-arms
Stephen Báthory of Ecsed ( Hungarian: Báthory István, pronounced  [ˈbaːtori ˈiʃtvaːn]; Romanian: Ștefan Báthory; 1430–1493) was a Hungarian commander, 'dapiferorum regalium magister' (1458–?), judge royal (1471–1493) and voivode of Transylvania (1479–1493). He rose to power under King Matthias Corvinus of Hungary and after the king's death sided with Vladislav Jagiellon of Bohemia and later together with Pál Kinizsi defeated Prince John Corvin in the Battle of Csonthegy (1493). As a result of his cruelty in Transylvania, especially against the Székelys, he was deposed by the King in 1493 and died shortly afterwards. ( Full article...)

General images - show another
The following are images from various Hungary-related articles on Wikipedia.