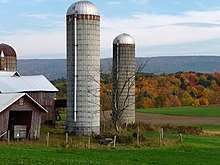 The Hudson Valley (also known as the Hudson River Valley) comprises the valley of the Hudson River and its adjacent communities in the U.S. state of New York. The region stretches from the Capital District including Albany and Troy south to Yonkers in Westchester County, bordering New York City. ( Full article...)

The Wallkill Valley Rail Trail is a 23.7-mile (38.1 km) rail trail and linear park that runs along the former Wallkill Valley Railroad rail corridor, from Gardiner through New Paltz to Rosendale. The addition of an 11.5-mile (18.5 km) section in 2009 effectively doubled the length of the trail from 12.2 miles (19.6 km) to 23.7 miles (38.1 km), extending it north from Rosendale through Ulster to Kingston.

There are several former rail bridges along the trail, notably the Rosendale trestle, a 940-foot (290 m) bridge that can be considered the "most awesome part" of the former Wallkill Valley Railroad. The trail passes by several historic sites, such as Huguenot Street in New Paltz, and the Binnewater Historic District and Snyder Estate in Rosendale. It crosses both the Wallkill River and Rondout Creek, as well as U.S. Route 44 ( concurrent with State Route 55), and state routes 299 and 213. The Shawangunk Ridge is visible from clearings along the trail.

Recognized as the first great slugger in baseball history, and among the greatest sluggers of his era, he held the record for career home runs from 1887 to 1889, with his final total of 106 tying for the fourth most of the 19th century. His career slugging percentage of .519 remained the major league record for a player with at least 4,000 at bats until Ty Cobb edged ahead of him in 1922. At the time of his initial retirement, he also ranked second in career triples (205), and third in runs batted in (1,296) and hits.