From Wikipedia
https://en.wikipedia.org/wiki/Portal:Holidays
Wikipedia portal for content related to Holidays

A holiday is a day set aside by custom or by law on which normal activities, especially business or work including school, are suspended or reduced. Generally, holidays are intended to allow individuals to celebrate or commemorate an event or tradition of cultural or religious significance. Holidays may be designated by governments, religious institutions, or other groups or organizations. The degree to which normal activities are reduced by a holiday may depend on local laws, customs, the type of job held or personal choices.

The concept of holidays often originated in connection with religious observances. The intention of a holiday was typically to allow individuals to tend to religious duties associated with important dates on the calendar. In most modern societies, however, holidays serve as much of a recreational function as any other weekend days or activities. ( Full article...) 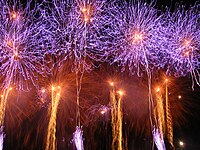 Within many cultures the use of fireworks and other noise making is a major part of the celebration in cities such as Berlin, New York City, Sydney, London, Paris, Rio de Janeiro, Toronto, Prague and Tokyo. New Year's Eve is a public non-working holiday in the following countries, among others: Australia, Argentina, Brazil, Mexico, Greece, New Zealand, the Philippines, and Venezuela.

Ebenezer Scrooge is the main character in Charles Dickens' 1843 novel, A Christmas Carol. He is a very cold-hearted, selfish man, who has no love for Christmas, children, or anything that even provokes happiness. The story of his transformation by the three Ghosts of Christmas ( Past, Present, and Yet to Come) has become a defining tale of the Christmas holiday in some cultures. Scrooge's phrase, "Bah, humbug!" has been used to express disgust with Christmas traditions in modern times. The inspiration for Charles Dickens' character was a grave marker for an Ebenezer Lennox Scroggie.