Welcome to the Heraldry and Vexillology Portal!

Vexillology (from the Latin vexillum, a flag or banner) is the scholarly study of flags, including the creation and development of a body of knowledge about flags of all types, their forms and functions, and of scientific theories and principles based on that knowledge. Flags were originally used to assist military coordination on the battlefield, and have evolved into a general tool for signalling and identification, particularly identification of countries.

Heraldry encompasses all of the duties of a herald, including the science and art of designing, displaying, describing and recording coats of arms and badges, as well as the formal ceremonies and laws that regulate the use and inheritance of arms. The origins of heraldry lie in the medieval need to distinguish participants in battles or jousts, whose faces were hidden by steel helmets.

Emilio Aguinaldo y Famy (March 22, 1869 – February 6, 1964) was a Filipino general, politician, and independence leader. He played an instrumental role in Philippine independence during the Philippine Revolution against Spain and the Philippine–American War that resisted American occupation. He designed the flag of the Philippines. ( more...)

The national flag of Tunisia ( Arabic: علم تونس‎) is predominantly red and consists of a white circle in the middle containing a red crescent around a five-pointed star. The Bey of Tunis Al-Husayn II ibn Mahmud decided to create the flag after the Battle of Navarino on 20 October 1827, which was adopted in 1831 or 1835. It remained the country's official flag during its time as a French protectorate, and was confirmed as the national flag of the Republic of Tunisia with the signing of the Constitution of Tunisia on 1 June 1959. It was not until 30 June 1999 that its proportions and design were clearly specified in law.

The crescent and star recalls the Ottoman flag and is therefore an indication of Tunisia's history as a part of the Ottoman Empire. ( more...)

The National Emblem of Belarus ( Belarusian: Дзяржаўны герб Рэспублікі Беларусь, Russian: Государственный герб Республики Беларусь), which replaced the historic Pahonia arms in a 1995 referendum, features a ribbon in the colors of the national flag, the map of Belarus, wheat ears and a red star. It is sometimes referred to as the coat of arms of Belarus, which is incorrect due to lack of several heraldic elements. The emblem is an allusion to the one used by the Byelorussian SSR, designed by I.I. Dubasov in 1950. Emblems reminiscent of the times of the Soviet Union are also used by the nations of Tajikistan and Uzbekistan and the region of Transnistria. ( more...) 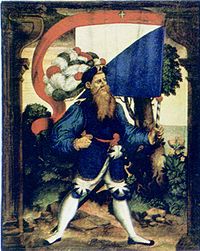 The blue and white banner of Zürich was depicted in a 1585 painting by Humbert Mareschet. The red Schwenkel on top of the banner is typical of German heraldry.