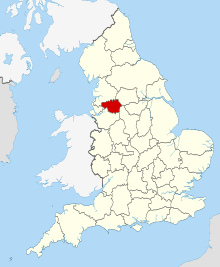 Greater Manchester is a metropolitan county and combined authority area in North West England, with a population of 2.8 million; comprising ten metropolitan boroughs: Bolton, Bury, Oldham, Rochdale, Stockport, Tameside, Trafford, Wigan, and the cities of Manchester and Salford. Greater Manchester was created on 1 April 1974, as a result of the Local Government Act 1972, and designated a functional city region on 1 April 2011.

Greater Manchester spans 493 square miles (1,277 km2), which roughly covers the territory of the Greater Manchester Built-up Area, the second most populous urban area in the UK. Though geographically landlocked, it is connected to the sea by the Manchester Ship Canal which is still open to shipping in Salford and Trafford. Greater Manchester sits within the historic counties of Lancashire, Cheshire, Yorkshire and Derbyshire and borders the ceremonial counties of Cheshire (to the south-west and south), Derbyshire (to the south-east), West Yorkshire (to the north-east), Lancashire (to the north) and Merseyside (to the west). There is a mix of high-density urban areas, suburbs, semi-rural and rural locations in Greater Manchester, but land use is mostly urban—the product of concentric urbanisation and industrialisation which occurred mostly during the 19th century when the region flourished as the global centre of the cotton industry. It has a focused central business district, formed by Manchester city centre and the adjoining parts of Salford and Trafford, but Greater Manchester is also a polycentric county with ten metropolitan districts, each of which has at least one major town centre and outlying suburbs.

Greater Manchester is governed by the Greater Manchester Combined Authority (GMCA), which consists of political leaders from each of the ten metropolitan borough councils, plus a directly elected mayor, with responsibility for economic development, regeneration and transport. Andy Burnham is the inaugural Mayor of Greater Manchester, elected in 2017. For the 12 years following 1974, the county had a two-tier system of local government; district councils shared power with the Greater Manchester County Council. The county council was abolished in 1986 and so its districts (the metropolitan boroughs) effectively became unitary authority areas. However, the metropolitan county continued to exist in law and as a geographic frame of reference, and as a ceremonial county, with a Lord Lieutenant and a High Sheriff. Several county-wide services were co-ordinated through the Association of Greater Manchester Authorities between 1985 and 2011. ( Full article...)

The City of Manchester Stadium (also known as COMS or Eastlands) is a sports venue in Manchester, England. Originally designed as part of Manchester's failed bid for the 2000 Summer Olympics, the stadium was built for the 2002 Commonwealth Games at a cost of GB£110 million. After the Games, it was converted for use as a football ground, and became the home of Manchester City F.C. who moved there from Maine Road in 2003, signing a 250-year lease.

The stadium is bowl-shaped, with two tiers all the way around the ground and a third tier along the two side stands. As of 23 June 2007, it is the fifth largest stadium in the FA Premier League and twelfth largest in the United Kingdom with a seating capacity of 47,726. On 14 May 2008 it hosted the 2008 UEFA Cup Final.

The following are images from various Greater Manchester-related articles on Wikipedia.

Greater Manchester is split into 10 boroughs: 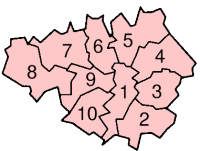 Oasis are an English rock band that formed in Manchester in 1991. They have sold more than 50 million records worldwide, have had eight UK number-one singles and have collected 15 NME Awards, 5 Brit Awards and 9 Q awards.

The band initially gained prominence performing on the Manchester club circuit. They were signed to independent record label Creation Records and afterwards released their debut album Definitely Maybe in 1994. The following year, the band recorded (What's the Story) Morning Glory?, and at the height of their fame, Oasis released their third album, Be Here Now (1997). It became the fastest-selling album in UK chart history, but lost much of its long-term appeal after the initial hype. The band suffered a notable decline in popularity in America and lost three long-time members between recording and releasing Standing on the Shoulder of Giants (2000) and Heathen Chemistry (2002).

Their sixth album Don't Believe the Truth (2005), despite turbulent recording, became their best-selling and best-received album in a decade. In February 2007, Oasis received the BRIT Award for outstanding contribution to music. Dig Out Your Soul, the seventh studio album by the band, is set to be released on October 6, 2008.

You can help too!

Why not take a look at the list of stubs needing expansion, requested articles, requested images and the articles needing cleanup?

Thanks, and don't forget that if you feel an article on Greater Manchester is missing, request it, or create it.