The layout design for these subpages is at Portal:Geography/Featured picture/Layout. 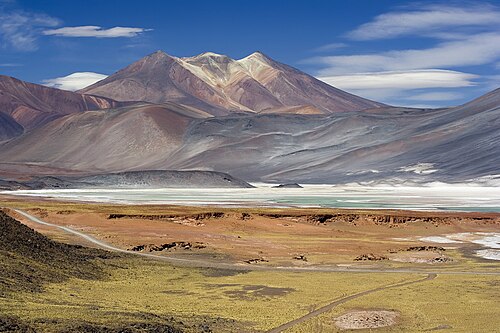 The Salar de Talar salt flat, located in the Central Andean dry puna region of the Chilean Andes with Cerros de Incahuasi in the distance. The salt flat covers an area of about 46 km2 (18 sq mi) and is one of many salt lakes and salt flats located at the foothills of a chain of volcanoes stretching along the eastern side of the much greater Salar de Atacama.

Sunrise on the tessellated pavement at Eaglehawk Neck, Tasmania. Tessellation (the tiled appearance) of flat-lying sedimentary rock may occur on some ocean shores when the rock fractures through the action of stress on the Earth's crust and is subsequently modified by sand and wave action.

The Alter Strom ("Old River") canal in Warnemünde, a sea resort and district of Rostock in Mecklenburg-Vorpommern, situated at the Baltic Sea in the Northeast of Germany at the estuary of the river Warnow.

Topographic map of the state of Florida. 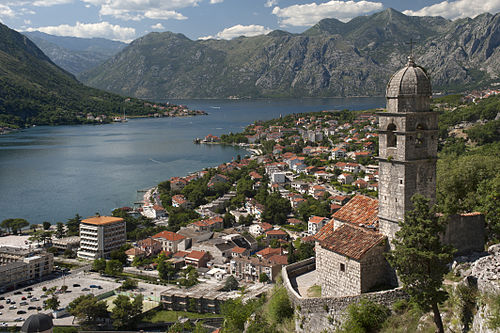 The Bay of Kotor is a winding bay on the Adriatic Sea in south-western Montenegro. It is a ria of the disintegrated Bokelj River which used to run from the high mountain plateaus of Mount Orjen. The bay has been inhabited since antiquity and has some well preserved medieval towns, making it an important tourist attraction in Montenegro. 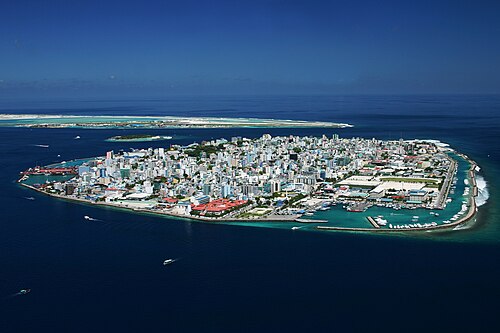 An aerial photo of Malé, the capital of the Republic of Maldives. Malé is located on Malé Island in the Kaafu Atoll, but administratively it is not considered part of Kaafu. The island is heavily urbanised, with the city, one of the most densely populated in the world, taking up most of its entire landmass. The tsunami resulting from the Indian Ocean earthquake in December 2004 flooded two-thirds of the city.

A panoramic view of Skiddaw mountain, the town of Keswick, and Derwentwater, as viewed from Walla Crag on a clear autumn afternoon in the Lake District. Located in North West England, the district is a popular tourist destination and is famous for its lakes and mountains, especially those within its national park.

Mount Hood, a dormant stratovolcano, reflected in the waters of Mirror Lake, Oregon, United States. At 11,249 feet (3,429 metres), Mount Hood is the highest mountain in Oregon and the fourth-highest in the Cascade Range. It is considered an active volcano, but no major eruptive events have been catalogued since systematic record keeping began in the 1820s.

A stitched panorama of a canal in the city of Amsterdam, the capital of the Netherlands. A series of concentric, semi-circular canals ("grachten") were dug around the old city centre in the 17th century, along which houses and warehouses were built. The canals still define Amsterdam's layout and appearance today.

A view from space of an explosive eruption of Sarychev Peak on June 12, 2009. The volcano is the central peak of Matua, an uninhabited island in the Kuril archipelago in the Sea of Okhotsk east of Russia and north of Japan. During World War II, the Imperial Japanese Army had an airfield on the island, which was taken over by the Soviet Border Troops after the war and abandoned in 1999.

Dead Acacia erioloba trees in Deadvlei, a white claypan inside Namib-Naukluft Park in the Namib Desert of Namibia. Deadvlei is surrounded by the highest sand dunes in the world, averaging 350 metres (1,150 ft) high. About 900 years ago, drought caused the dunes to block the Tsauchab river, which in turn killed the trees. However, because the desert is so dry, they do not decompose.

The Blue Mountains in Australia borders on Sydney's metropolitan area, its foothills starting approximately 50 kilometres (31 mi) west of the state capital. Geologically, it is situated in the central parts of the Sydney Basin. Consisting mainly of a sandstone plateau, the area is dissected by gorges up to 760 metres (2,490 ft) deep.

The Horn is the most prominent peak on the Mount Buffalo plateau in Victoria, Australia. It has an elevation of 1,723 m (5,653 ft) AHD. Found on the west side of the Victorian Alps (part of the Australian Alps and the Great Dividing Range), the top of the mountain has granite boulders and rock formations.

An aerial view of Laguna Beach, a seaside resort city and artist community located in southern Orange County, California, US. The region was originally known to the Spanish as "La Cañada de Las Lagunas" which means "The Canyon of the Small Lakes", in reference to two lakes found near the head of Laguna Canyon.

The Sella is a plateau shaped massif in the Dolomites mountains of northern Italy. The Sella lies north of the Marmolada and to the east of the Langkofel. The highest peak is Piz Boè at 3.151m/ 10,338 ft above sea level. The Sella lies between the four Ladin valleys of Badia, Gherdëina, Fascia, and Fodom and is divided between the provinces of South Tyrol, Trentino and Belluno.

As you can see from this picture the snow is notorious for piling up atop the mountain. 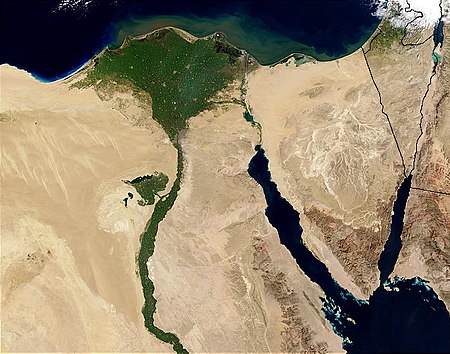 The Nile Delta is the delta formed in Northern Egypt where the Nile River spreads out and drains into the Mediterranean Sea. It is one of the world's largest river deltas—from Alexandria in the west to Port Said in the east, it covers 240 km of Mediterranean coastline—and is a rich agricultural region. From north to south the delta is approximately 160 km in length. The Delta begins slightly down-river from Cairo. 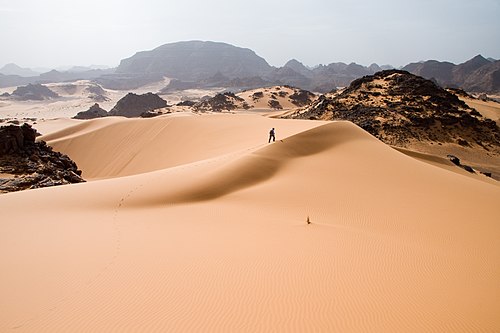 The Tadrart Acacus is a desert area in western Libya, part of the Sahara. The Acacus Mountains form a mountain range situated east of the Libyan city of Ghat and stretch north from the Algerian border about 100 km.

An aerial view of Tartini Square, the largest and main town square in Piran, Slovenia. It is named after violinist and composer Giuseppe Tartini, who was born in Piran. The square was once an inner dock for smaller vessels such as fishing boats, and was located outside of the first city walls. The dock was replaced by a formal town square in 1894. 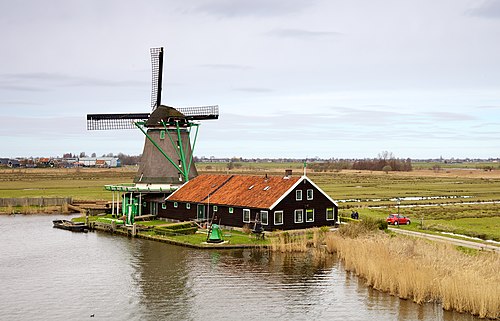 De Zoeker ("The Seeker") is a windmill located in the Zaanse Schans, Zaanstad, Netherlands used to extract oil from seeds. Built in 1672, it is the only such mill still in operation, and is one of five remaining oil mills in the area. 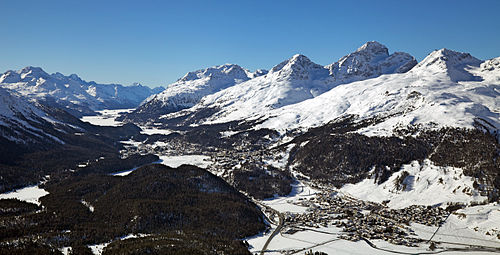 A view of the High Engadin valley in Switzerland, from Muottas Muragl. The Engadin follows the route of the Inn River from its headwaters at Maloja Pass running northeast until the Inn flows into Austria 100 km (62 mi) downstream. The Engadin is protected by high mountains on all sides and is famous for its sunny climate, beautiful landscapes and outdoor activities. 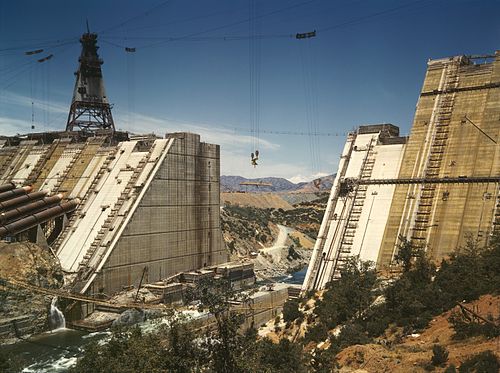 Shasta Dam, an arch dam across the Sacramento River at the north end of the Sacramento Valley, California, during its construction in June 1942. The dam mainly serves long-term water storage and flood control in its reservoir, Shasta Lake, and also generates hydroelectric power. At 602 ft (183 m) high, it is the ninth-tallest dam in the United States and forms the largest reservoir in California. 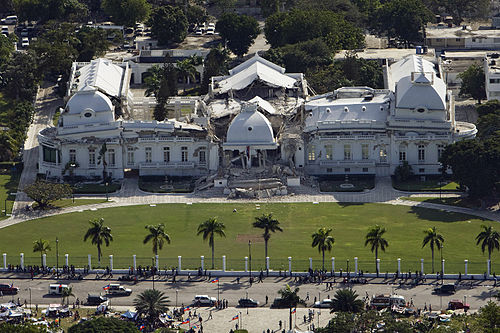 This photo, taken the day after the 2010 Haiti earthquake, shows the damage it caused to the National Palace of Haiti. The palace's collapsed cupola has become a symbol of the devastation caused by the quake. The Haitian government is currently in the process of demolishing the remains in preparation for reconstruction.

A panoramic view of Blois, the capital of Loir-et-Cher department in central France, situated on the banks of the lower river Loire between Orléans and Tours. The area has been inhabited since at least the 6th century and was once the seat of a powerful countship. It is also known for being Joan of Arc's base of operations for the relief of Orléans.

The Thames Barrier, the world's second-largest movable flood barrier, as seen from Silvertown on the north bank of the River Thames during normal operation, looking across to New Charlton. The barrier is located downstream of central London and its purpose is to prevent London from being flooded by exceptionally high tides and storm surges moving up from the sea. It needs to be raised (closed) only during high tide; at ebb tide it can be lowered to release the water that backs up behind it.

A panoramic view of the Paris business district of La Défense, which includes the cities of Puteaux, Courbevoie and Nanterre, as seen from the Tour Défense 2000. The area holds many of the Paris urban area's tallest high-rises. With its 77.5 acres (314,000 m2), its 72 glass-and-steel slick buildings including 14 high-rises above 150 m (490 ft), its 180,000 daily workers, and 3.5 million m2 (37.7 million sq ft) of office space, La Défense is Europe's largest purpose-built business district. 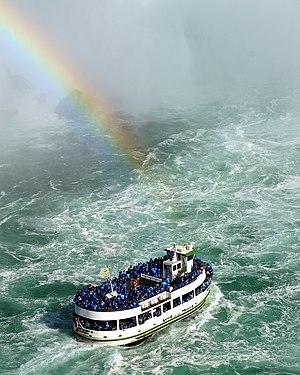 One of the tour boats of the Maid of the Mist tour of Niagara Falls. The tour starts off at a calm part of the Niagara River (from both the American and Canadian sides) near the Rainbow Bridge, and takes its passengers past the American and Bridal Veil Falls, then into the dense mist of spray inside the curve of the Horseshoe Falls. The first Maid of the Mist was launched in 1846 as a ferry service between the Canadian and American sides, predating by two years the construction of the first Niagara Falls Suspension Bridge. However, with the opening of the bridge, the ferry service lost business, and by 1854, became a tourist attraction instead.

A panoramic view of the north walls of Ani, a ruined and uninhabited medieval Armenian city-site in the Turkish province of Kars, near the border with Armenia. It was once the capital of a medieval Armenian kingdom that covered much of present day Armenia and eastern Turkey. At its height, Ani had a population of 100,000–200,000 people and its many religious buildings, palaces, and fortifications were amongst the most technically and artistically advanced structures in the world. 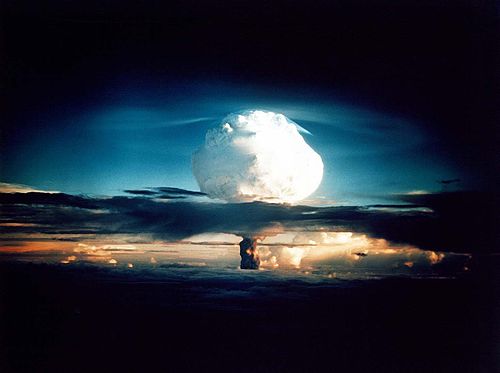 The mushroom cloud from the Ivy Mike nuclear test, one of two tests conducted as part of Operation Ivy at the Pacific Proving Grounds on Elugelab in the Marshall Islands. Mike was the first successful full-scale test of a multi- megaton thermonuclear weapon, and it left an underwater crater 6,240 ft (1,900 m) wide and 164 ft (50 m) deep where the island had been.

The Horn is the most prominent peak on the Mount Buffalo plateau in Victoria, Australia. It has an elevation of 1,723 m (5,653 ft) AHD. Found on the west side of the Victorian Alps (part of the Australian Alps and the Great Dividing Range), the top of the mountain has granite boulders and rock formations.

An aerial view of Laguna Beach, a seaside resort city and artist community located in southern Orange County, California, US. The region was originally known to the Spanish as "La Cañada de Las Lagunas" which means "The Canyon of the Small Lakes", in reference to two lakes found near the head of Laguna Canyon.

Aerial view of Makhtesh Ramon, a type of crater unique to the Negev desert in Israel and the Sinai Peninsula in Egypt.

Feel free to add related featured pictures to the above list.