From Wikipedia
https://en.wikipedia.org/wiki/Portal:Geography
Wikipedia portal for content related to Geography 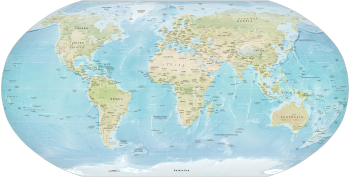 A physical map of the Earth

Geography (from Greek: γεωγραφία, geographia, literally "earth description") is a field of science devoted to the study of the lands, features, inhabitants, and phenomena of the Earth and planets. The first person to use the word γεωγραφία was Eratosthenes (276–194 BC). Geography is an all-encompassing discipline that seeks an understanding of Earth and its human and natural complexities—not merely where objects are, but also how they have changed and come to be.

The four historical traditions in geographical research are spatial analyses of natural and the human phenomena, area studies of places and regions, studies of human-land relationships, and the Earth sciences. Geography has been called "the world discipline" and "the bridge between the human and the physical sciences". ( Full article...)

Outline of geography · Index
Refresh with new selections below (purge) 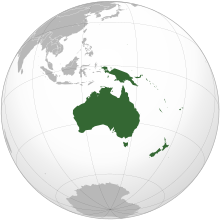 listen), /-ˈɑːn-/) is a geographic region that includes Australasia, Melanesia, Micronesia and Polynesia. Spanning the Eastern and Western Hemispheres, Oceania has a land area of 8,525,989 square kilometres (3,291,903 sq mi) and a population of over 41 million. When compared with the continents, the region of Oceania is the smallest in land area and the second smallest in population after Antarctica. ( Full article...)

For editor resources and to collaborate with other editors on improving Wikipedia's Geography-related articles, visit WikiProject Geography. 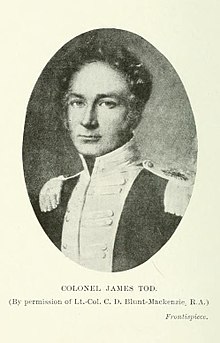 Lieutenant-Colonel James Tod (20 March 1782 – 18 November 1835) was an officer of the British East India Company and an Oriental scholar. He combined his official role and his amateur interests to create a series of works about the history and geography of India, and in particular the area then known as Rajputana that corresponds to the present day state of Rajasthan, and which Tod referred to as Rajast'han.

Tod was born in London and educated in Scotland. He joined the East India Company as a military officer and travelled to India in 1799 as a cadet in the Bengal Army. He rose quickly in rank, eventually becoming captain of an escort for an envoy in a Sindian royal court. After the Third Anglo-Maratha War, during which Tod was involved in the intelligence department, he was appointed Political Agent for some areas of Rajputana. His task was to help unify the region under the control of the East India Company. During this period Tod conducted most of the research that he would later publish. Tod was initially successful in his official role, but his methods were questioned by other members of the East India Company. Over time, his work was restricted and his areas of oversight were significantly curtailed. In 1823, owing to declining health and reputation, Tod resigned his post as Political Agent and returned to England. ( Full article...)

Did you know it about Geography?

You can read about interesting Wikipedia articles about places around you.