From Wikipedia
https://en.wikipedia.org/wiki/Portal:Energy
Wikipedia portal for content related to Energy 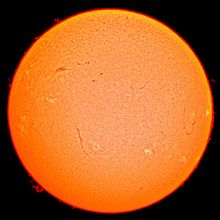 The Sun is the source of energy for most of life on Earth. It derives its energy mainly from nuclear fusion in its core, converting nuclear binding energy to other forms such as radiant energy as protons are combined to form helium. This energy is transported to the sun's surface then released into space mainly in the form of radiant (light) energy.

In physics, energy is the quantitative property that must be transferred to a body or physical system to perform work on the body, or to heat it. Energy is a conserved quantity; the law of conservation of energy states that energy can be converted in form, but not created or destroyed. The unit of measurement in the International System of Units (SI) of energy is the joule, which is the energy transferred to an object by the work of moving it a distance of one metre against a force of one newton.

Common forms of energy include the kinetic energy of a moving object, the potential energy stored by an object's position in a force field ( gravitational, electric or magnetic), the elastic energy stored by stretching solid objects, the chemical energy released when a fuel burns, the radiant energy carried by light, and the thermal energy due to an object's temperature.

Mass and energy are closely related. Due to mass–energy equivalence, any object that has mass when stationary (called rest mass) also has an equivalent amount of energy whose form is called rest energy, and any additional energy (of any form) acquired by the object above that rest energy will increase the object's total mass just as it increases its total energy. For example, after heating an object, its increase in energy could be measured as a small increase in mass, with a sensitive enough scale.

Living organisms require energy to stay alive, such as the energy humans get from food. Human civilization requires energy to function, which it gets from energy resources such as fossil fuels, nuclear fuel, or renewable energy. The processes of Earth's climate and ecosystem are driven by the radiant energy Earth receives from the Sun and the geothermal energy contained within the earth. ( Full article...)

Iran is an energy superpower and the petroleum industry plays an important part in it. In 2004 Iran produced 5.1 percent of the world’s total crude oil (3.9 million barrels (620,000 m3) per day), which generated revenues of US$25 billion to US$30 billion and was the country’s primary source of foreign currency. At 2006 levels of production, oil proceeds represented about 18.7 percent of gross domestic product. However, the importance of the hydrocarbon sector to Iran’s economy has been far greater. The oil and gas industry has been the engine of economic growth, directly affecting public development projects, the government’s annual budget, and most foreign exchange sources.

In FY 2009, the sector accounted for 60 percent of total government revenues and 80 percent of the total annual value of both exports and foreign currency earnings. Oil and gas revenues are affected by the value of crude oil on the international market. It has been estimated that at the Organization of the Petroleum Exporting Countries (OPEC) quota level (December 2004), a one-dollar change in the price of crude oil on the international market would alter Iran’s oil revenues by US$1 billion.

In 2012, Iran, which exports around 1.5 million barrels of crude oil a day, was the second-largest exporter among the Organization of Petroleum Exporting Countries. In the same year, officials in Iran estimate that Iran's annual oil and gas revenues could reach $250 billion by 2015. Iran plans to invest a total of $500 billion in the oil sector before 2025.

Photo credit: From an image by Wolfgang Beyer
Strombolian volcanic eruptions can eject incandescent cinder, lapilli and lava bombs to altitudes of tens to hundreds of meters.

Roman Arkadyevich Abramovich (born 24 October 1966 in Saratov, Russia) is a Jewish Russian oil billionaire and one of the Russian oligarchs.

Between 1992 and 1995, after Soviet president Mikhail Gorbachev's ' perestroika' economic reforms permitted the opening of small private businesses, Abramovich founded five companies that eventually evolved to specialize in the trading of oil and oil products. With the approved by Boris Yeltsin, in 1995 Roman Abramovich and partner Boris Berezovsky paid $100m for a controlling interest in the major Russian Sibneft oil company, then valued at $150 million. Berezovsky subsequently sold his stake to Abramovich after fleeing to London. In September 2005 Abramovich sold his interest in Sibneft to state energy giant Gazprom for $13 billion.

Despite maintaining that his primary residence is Moscow, in 2006 Abramovich was named as the second-wealthiest person in the United Kingdom. His property investments and other assets were estimated at £10.8 billion. In June 2003, Abramovich became the owner of the companies that control Chelsea Football Club ( soccer club). He also became the world's greatest spender on luxury yachts, with four boats in what the media have called the 'Abramovich Navy'.

Although he rarely visits the area, in October 2005 Abramovich was reappointed governor of the impoverished Chukotka Autonomous Okrug in the Russian Far East where he has made significant financial contributions. He was originally elected to the governorship in 1999.

9 June 2021 –
North American energy company TC Energy terminates its Keystone Pipeline project, which many environmentalists and Native Americans have opposed, citing the risk of pollution and potential damage to wildlife. The move comes nearly five months after United States President Joe Biden signed an executive order to revoke the permit that was granted to the company for the construction of the project's fourth phase. (Business Times)

The following are images from various energy-related articles on Wikipedia.
edit

Other WikiProjects that may be of interest:

For further ideas, to leave a comment, or to learn how you can help improve and update this portal, see the talk page.