From Wikipedia
https://en.wikipedia.org/wiki/Portal:Drink
Wikipedia portal for content related to Drink

A portal dedicated to all beverages 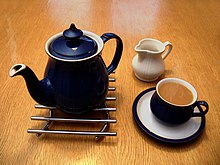 Tea is the world's second-most-consumed drink

A drink (or beverage) is a liquid intended for human consumption. In addition to their basic function of satisfying thirst, drinks play important roles in human culture. Common types of drinks include plain drinking water, milk, coffee, tea, hot chocolate, juice and soft drinks. In addition, alcoholic drinks such as wine, beer, and liquor, which contain the drug ethanol, have been part of human culture for more than 8,000 years.

Non-alcoholic drinks often signify drinks that would normally contain alcohol, such as beer and wine, but are made with a sufficiently low concentration of alcohol by volume. The category includes drinks that have undergone an alcohol removal process such as non-alcoholic beers and de-alcoholized wines. ( Full article...)

A packet of Maraba Coffee as sold in Rwanda
Maraba coffee ( Kinyarwanda: Ikawa ya Maraba; French: Café de Maraba) is grown in the Maraba area of southern Rwanda. Maraba's coffee plants are the Bourbon variety of the Coffea arabica species and are grown on fertile volcanic soils on high-altitude hills. The fruit is handpicked, mostly during the rainy season between March and May, and brought to a washing station in Maraba, where the coffee beans are extracted and dried. At several stages, the beans are sorted according to quality. The farmers receive credits based on the amount and quality of the beans they provide.

The beans are sold to various roasting companies, with the best beans going to Union Coffee Roasters of the United Kingdom, who produce a Fairtrade-certified brand and Community Coffee of the United States. Rwanda Smallholder Specialty Coffee Company (RWASHOSCCO) buys from Maraba and sells to the domestic market. Maraba coffee is also brewed into a beer.

The following are images from various drink-related articles on Wikipedia.

Charles Leiper Grigg (May 11, 1868 – April 16, 1940) was the inventor of Bib-Label Lithiated Lemon-Lime soda, better known by its later name, 7 Up. He invented the drink in October 1929. Grigg became acquainted with the carbonated beverage business after moving to St. Louis, Missouri. Prior to inventing 7 Up, Grigg had created an orange soft drink named "Whistle" for the Vess Soda Company. It is still made and sold in St. Louis. ( Full article...)

Agave
Agave ( /əˈɡɑːvi/, UK also /əˈɡeɪvi/, Anglo-Hispanic: /əˈɡɑːveɪ/) is a genus of monocots native to the hot and arid regions of the Americas, although some Agave species are also native to tropical areas of South America. The genus Agave (from the Ancient Greek αγαυή, agauê) is primarily known for its succulent and xerophytic species that typically form large rosettes of strong, fleshy leaves. Agave now includes species formerly placed in a number of other genera, such as Manfreda, ×Mangave, Polianthes and Prochnyanthes.

Plants in this genus may be considered perennial, because they require several to many years to mature and flower.[ page needed] However, most Agave species are more accurately described as monocarpic rosettes or multiannuals, since each individual rosette flowers only once and then dies; a small number of Agave species are polycarpic.[ page needed]

WikiProject Food & Drink is an association of Wikipedians with an interest in culinary-related subjects. They have come together to co-ordinate the development of food and drink articles here on Wikipedia as well as the many subjects related to food such as foodservice, catering and restaurants. If you wish to learn more about these subjects as well as get involved, please visit the Food & Drink Wikiproject page to see how you can help!

Beyond general culinary interests, Wikipedians have banded together for beverage-specific projects. If any of these subjects pique your interest, please feel free to visit their projects.

WikiProject Wine – aims to compile thorough and accurate information on different vineyards, wineries and varieties of wines, including but not limited to their qualities, origins, and uses.