From Wikipedia
https://en.wikipedia.org/wiki/Portal:Disney
Wikipedia portal for content related to the Walt Disney Company

The Walt Disney Company (commonly known as Disney ( /ˈdɪzni/); common metonym: the House of Mouse, the Mouse House or the Mouse) is an American diversified multinational mass media and entertainment conglomerate headquartered at the Walt Disney Studios complex in Burbank, California.

Disney was originally founded on October 16, 1923, by brothers Walt and Roy O. Disney as the Disney Brothers Cartoon Studio; it also operated under the names The Walt Disney Studio and Walt Disney Productions before officially changing its name to The Walt Disney Company in 1986. The company established itself as a leader in the American animation industry before diversifying into live-action film production, television, and theme parks.

Perry the Platypus, also known as Agent P or simply Perry, is an anthropomorphic platypus from the animated television series Phineas and Ferb. Perry is voiced by Dee Bradley Baker and created by the series' co-founders, Dan Povenmire and Jeff "Swampy" Marsh. He first appeared along with the majority of the main cast in the pilot episode " Rollercoaster." Perry is featured as the star of the B-Plot for every episode of the series, alongside his arch- nemesis Dr. Heinz Doofenshmirtz. Perry is the pet platypus for the blended Flynn-Fletcher family, who is perceived as mindless and domesticated. In secret, however, he lives a double life as a member of an all-animal espionage organization referred to as The O.W.C.A. ("Organization Without a Cool Acronym"). Many entrances to this organization are usually found all around the house; such as the side of the house, most notably the tree that the boys sit under and many other everyday objects that seem to elude the family's attention. He engages in daily battles with Dr. Heinz Doofenshmirtz, a mad scientist who desires to take over the Tri-state area with obscure contraptions. Perry was made a platypus because of the animal's striking appearance and the lack of public knowledge of the animal, which allows the writers to make things up about the species. Critical reception for the character from both professionals and fans have been considerably positive. Merchandising of the character include plush toys and t-shirts, along with appearances in literature and a 2009 video game for the Nintendo DS.
More selected articles... • Read more... 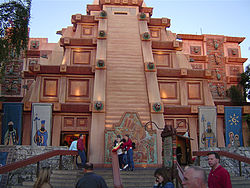 The pyramid outside Mexico (Epcot)

Steve Jobs (b. 1955, d. 2011) was an American business magnate and inventor. He is co-founder, chairman, and former chief executive officer of Apple Inc. Jobs also previously served as chief executive of Pixar Animation Studios; he became a member of the board of directors of The Walt Disney Company in 2006, following the acquisition of Pixar by Disney. He was credited in the 1995 film Toy Story as an executive producer. In the late 1970s, Jobs, with Apple co-founder Steve Wozniak, Mike Markkula, and others, designed, developed, and marketed one of the first commercially successful lines of personal computers, the Apple II series. In the early 1980s, Jobs was among the first to see the commercial potential of Xerox PARC's mouse-driven graphical user interface, which led to the creation of the Macintosh. After losing a power struggle with the board of directors in 1985, Jobs resigned from Apple and founded NeXT, a computer platform development company specializing in the higher-education and business markets. Apple's subsequent 1996 buyout of NeXT brought Jobs back to the company he co-founded, and he served as its CEO from 1997 until 2011. In 1986, he acquired the computer graphics division of Lucasfilm Ltd which was spun off as Pixar Animation Studios. He remained CEO and majority shareholder at 50.1% until its acquisition by The Walt Disney company in 2006. In 2011, Apple announced that Steve Jobs had died at the age of 56.
More selected biographies... • Read more...