From Wikipedia
https://en.wikipedia.org/wiki/Portal:Devon
Wikipedia portal for content related to Devon

Devon ( /ˈdɛvən/, also known as Devonshire) is a county of England, reaching from the Bristol Channel in the north to the English Channel in the south. It is part of South West England, bounded by Cornwall to the west, Somerset to the north-east and Dorset to the east. The city of Exeter is the county town. The county includes the districts of East Devon, Mid Devon, North Devon, South Hams, Teignbridge, Torridge and West Devon. Plymouth and Torbay are each geographically part of Devon, but are administered as unitary authorities. Combined as a ceremonial county, Devon's area is 6,707 km2 (2,590 square miles) and its population is about 1.1 million.

Devon derives its name from Dumnonia (the shift from m to v is a typical Celtic consonant shift). During the British Iron Age, Roman Britain and the early Middle Ages, this was the homeland of the Dumnonii Brittonic Celts. The Anglo-Saxon settlement of Britain resulted in the partial assimilation of Dumnonia into the Kingdom of Wessex during the eighth and ninth centuries. The western boundary with Cornwall was set at the River Tamar by King Æthelstan in 936. Devon was later constituted as a shire of the Kingdom of England. ( Full article...)

Dartmoor is an upland area in southern Devon, England. The moorland and surrounding land has been protected by National Park status since 1951. Dartmoor National Park covers 954 km2 (368 sq mi).

The granite which forms the uplands dates from the Carboniferous Period of geological history. The landscape consists of moorland capped with many exposed granite hilltops known as tors, providing habitats for Dartmoor wildlife. The highest point is High Willhays, 621 m (2,037 ft) above sea level. The entire area is rich in antiquities and archaeology.

Parts of Dartmoor have been used as military firing ranges for over 200 years. The public is granted extensive land access rights on Dartmoor (including restricted access to the firing ranges) and it is a popular tourist destination. ( Full article...)

The following are images from various Devon-related articles on Wikipedia.
edit 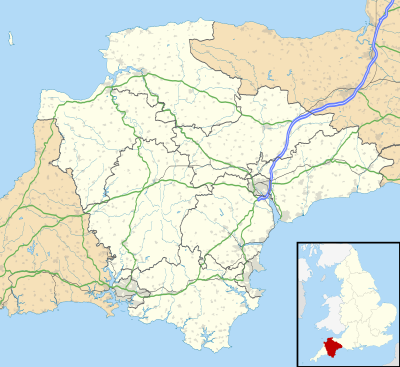