From Wikipedia
https://en.wikipedia.org/wiki/Portal:Cyprus
Wikipedia portal for content related to Cyprus

The flag of Cyprus

listen)), officially called the Republic of Cyprus, is an island nation in the eastern Mediterranean Sea. It is the third largest and third most populous island in the Mediterranean, and is located south of Turkey; west of Syria; northwest of Lebanon, Israel and Palestine; north of Egypt; and southeast of Greece. Nicosia is the country's capital and largest city.

The earliest known human activity on the island dates to around the 10th millennium BC. Archaeological remains from this period include the well-preserved Neolithic village of Khirokitia, and Cyprus is home to some of the oldest water wells in the world. Cyprus was settled by Mycenaean Greeks in two waves in the 2nd millennium BC. As a strategic location in the Eastern Mediterranean, it was subsequently occupied by several major powers, including the empires of the Assyrians, Egyptians and Persians, from whom the island was seized in 333 BC by Alexander the Great. Subsequent rule by Ptolemaic Egypt, the Classical and Eastern Roman Empire, Arab caliphates for a short period, the French Lusignan dynasty and the Venetians, was followed by over three centuries of Ottoman rule between 1571 and 1878 ( de jure until 1914).

Cyprus was placed under the UK's administration based on the Cyprus Convention in 1878 and was formally annexed by the UK in 1914. The future of the island became a matter of disagreement between the two prominent ethnic communities, Greek Cypriots, who made up 77% of the population in 1960, and Turkish Cypriots, who made up 18% of the population. From the 19th century onwards, the Greek Cypriot population pursued enosis, union with Greece, which became a Greek national policy in the 1950s. The Turkish Cypriot population initially advocated the continuation of the British rule, then demanded the annexation of the island to Turkey, and in the 1950s, together with Turkey, established a policy of taksim, the partition of Cyprus and the creation of a Turkish polity in the north. Following nationalist violence in the 1950s, Cyprus was granted independence in 1960. The crisis of 1963–64 brought further intercommunal violence between the two communities, displaced more than 25,000 Turkish Cypriots into enclaves and brought the end of Turkish Cypriot representation in the republic. On 15 July 1974, a coup d'état was staged by Greek Cypriot nationalists and elements of the Greek military junta in an attempt at enosis. This action precipitated the Turkish invasion of Cyprus on 20 July, which led to the capture of the present-day territory of Northern Cyprus and the displacement of over 150,000 Greek Cypriots and 50,000 Turkish Cypriots. A separate Turkish Cypriot state in the north was established by unilateral declaration in 1983; the move was widely condemned by the international community, with Turkey alone recognising the new state. These events and the resulting political situation are matters of a continuing dispute. ( Full article...) 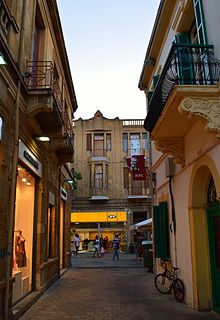 View of Ledra Street from Socrates Street after sunset

Ledra Street ( Greek: Οδός Λήδρας Odos Lidras; Turkish: Ledra Caddesi) is a major shopping thoroughfare in central Nicosia, Cyprus, which links North Nicosia, the part of the city under the control of the de facto Northern Cyprus, and south Nicosia.

It is the site of the former Ledra Street barricade, across the United Nations buffer zone. The barricade symbolised the division of Nicosia between the Greek south and Turkish north. It was removed in April 2008 and Ledra Street became the sixth crossing between the southern and northern parts of Cyprus. Ledra Street runs parallel to Onasagorou Street. ( Full article...)
edit

10 June 2021 – COVID-19 pandemic
COVID-19 pandemic in Cyprus
Cyprus lifts their curfew and reopens nightclubs after 15 months. In addition, 50% capacity restrictions for private and public service workers are no longer required. (TheMayor)
3 June 2021 – Holy See–Israel relations, Holy See–Palestine relations
Pope Francis appoints Archbishop Tito Yllana as the new Apostolic Nuncio in Israel and Cyprus, and Apostolic Delegate in Jerusalem and Palestine. (Vatican News)
30 May 2021 – 2021 Cypriot legislative election
Greek Cypriots head to the polls to elect a new session to the House of Representatives. Analysts predict a fragmented parliament, as issues of corruption spurred by a scandal involving the country's " citizenship through investment" program last year, and the lack of progress on the Cyprus dispute, has reduced support for the three main parties. (Deutsche Welle)
26 May 2021 – COVID-19 pandemic
COVID-19 pandemic in Cyprus
The Cypriot Ministry of Health issues a new recommendation that people under the age of 50 should not receive the Oxford–AstraZeneca vaccine and should receive an mRNA vaccine instead. However, people under the age of 50 who have already received their first dose of the AstraZeneca vaccine should proceed normally with the second dose. (Cyprus Mail)

The following are images from various Cyprus-related articles on Wikipedia.
edit