From Wikipedia
https://en.wikipedia.org/wiki/Portal:Conservatism
Wikipedia portal for content related to Conservatism

The first established use of the term in a political context originated in 1818 with François-René de Chateaubriand during the period of Bourbon Restoration that sought to roll back the policies of the French Revolution. Historically associated with right-wing politics, the term has since been used to describe a wide range of views. There is no single set of policies regarded as conservative because the meaning of conservatism depends on what is considered traditional in a given place and time. Conservative thought has varied considerably as it has adapted itself to existing traditions and national cultures. For example, some conservatives advocate for greater government intervention in the economy while others advocate for a more laissez faire free market economic system. Thus conservatives from different parts of the world—each upholding their respective traditions—may disagree on a wide range of issues. Edmund Burke, an 18th-century politician who opposed the French Revolution, but supported the American Revolution, is credited as one of the main theorists of conservatism in the 1790s. ( Full article...)

Margaret Hilda Thatcher, Baroness Thatcher (born 1925), is a former Prime Minister of the United Kingdom who served from 1979 to 1990. In the 1959 general election she became MP for Finchley. Edward Heath appointed Thatcher Secretary of State for Education and Science in his 1970 government. In 1975 she was elected Leader of the Conservative Party, the first woman to head a major UK political party, and in 1979 she became the UK's first female Prime Minister. After entering 10 Downing Street Thatcher was determined to reverse what she perceived as a precipitous national decline. Her political philosophy and economic policies emphasised deregulation, particularly of the financial sector, flexible labour markets, the sale or closure of state-owned companies, and the withdrawal of subsidies to others. Thatcher's popularity waned amid recession and high unemployment, until economic recovery and the 1982 Falklands War brought a resurgence of support resulting in her re-election in 1983. Thatcher was re-elected for a third term in 1987, but her Community Charge was widely unpopular and her views on the European Community were not shared by others in her Cabinet. She resigned as Prime Minister and party leader in November 1990 after Michael Heseltine's challenge to her leadership of the Conservative Party.
Archive – Read more...

This outrage on all the rights of property was at first covered with what, on the system of their conduct, was the most astonishing of all pretexts-a regard to national faith. The enemies to property at first pretended a most tender, delicate, and scrupulous anxiety for keeping the king's engagements with the public creditor. These professors of the right of men are to busy in teaching others, that they not leisure to learn any thing themselves; otherwise they would have known that it is to the property of the citizen, and not to the demands of the creditor of the state, that the first and original faith of civil society is pledged. The claim of the citizen is prior in time, paramount in title, superior in equity. The fortunes of individuals, whether possessed by acquisition, or by descent, or in virtue of participation in the goods of some community, were no part of the creditor's security, expressed, or implied. They never so much as entered into his head when he made his bargain. He well knew that the public, whether represented by a monarch, or by a senate, can pledge nothing but the public estate; and it can have no public estate, expect in what it derives from a just and proportioned imposition upon the citizens at large. This was engaged, and nothing else could be engaged to the public creditor. No man can mortgage his injustice as a pawn for his fidelity.

—  Edmund Burke, Reflections on the Revolution in France (1790) 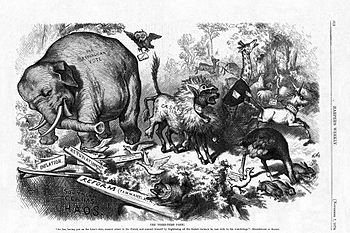 The traditional mascot of the United States Republican Party is the elephant. A political cartoon by Thomas Nast, published in Harper's Weekly on November 7, 1874, is considered the first important use of the symbol. In the early 20th century, the usual symbol of the Republican Party in Midwestern states such as Indiana and Ohio was the eagle, as opposed to the Democratic rooster. This symbol still appears on Indiana, New York, and West Virginia ballots.

Harper's Weekly (A Journal of Civilization) was an American political magazine based in New York City. Published by Harper & Brothers from 1857 until 1916, it featured foreign and domestic news, fiction, essays on many subjects, and humor.