From Wikipedia
https://en.wikipedia.org/wiki/Portal:Colorado
Wikipedia portal for content related to Colorado

Select here to update the selections below by clearing the cache.

Colorado is the state of the United States of America that encompasses most of the Southern Rocky Mountains as well as the northeastern portion of the Colorado Plateau and the high western edge of the Great Plains. Fifty-five of the 124 highest major mountain peaks of North America rise in Colorado. Admitted to the Union on August 1, 1876, Colorado became the 38th U.S. state. Colorado ranks eighth in total area, 21st in population, first in mean elevation, and first in life expectancy among the 50 U.S. states. The 2020 United States Census enumerated the population of the State of Colorado at 5,773,714, an increase of 14.80% since the 2010 United States Census. Denver is the state capital, the most populous city, and the heart of the most populous metropolitan area of the Rocky Mountain Region. Colorado Springs is the state's second most populous city. While the population of the Front Range Urban Corridor now exceeds five million, many rugged portions of the state remain pristine wilderness.
More about Colorado...

You are cordially invited to join

You need not be either an expert or a resident.
You only need an active interest in the Centennial State.

Stegosaurus ( /ˌstɛɡəˈsɔːrəs/; lit. 'roof-lizard') is a genus of herbivorous, four-legged, armored dinosaurs from the Late Jurassic, characterized by the distinctive upright plates along their backs and spikes on their tails. Fossils of this dinosaur have been found in the western United States and in Portugal, where they are found in Kimmeridgian- to early Tithonian-aged strata, dating to between 155 and 150  million years ago. Of the species that have been classified in the upper Morrison Formation of the western US, only three are universally recognized: S. stenops, S. ungulatus and S. sulcatus. The remains of over 80 individual animals of this genus have been found. Stegosaurus would have lived alongside dinosaurs such as Apatosaurus, Diplodocus, Brachiosaurus, Allosaurus, and Ceratosaurus; the latter two may have preyed on it.

These were large, heavily built, herbivorous quadrupeds with rounded backs, short fore limbs, long hind limbs, and tails held high in the air. Due to their distinctive combination of broad, upright plates and tail tipped with spikes, Stegosaurus is one of the most recognizable kinds of dinosaurs. The function of this array of plates and spikes has been the subject of much speculation among scientists. Today, it is generally agreed that their spiked tails were most likely used for defense against predators, while their plates may have been used primarily for display, and secondarily for thermoregulatory functions. Stegosaurus had a relatively low brain-to-body mass ratio. It had a short neck and a small head, meaning it most likely ate low-lying bushes and shrubs. One species, Stegosaurus ungulatus, is the largest known of all the stegosaurians (bigger than related dinosaurs such as Kentrosaurus and Huayangosaurus). ( Full article...)
edit 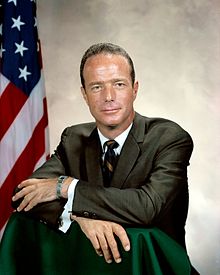 Malcolm Scott Carpenter (May 1, 1925 – October 10, 2013) was an American naval officer and aviator, test pilot, aeronautical engineer, astronaut, and aquanaut. He was one of the Mercury Seven astronauts selected for NASA's Project Mercury in April 1959. Carpenter was the second American (after John Glenn) to orbit the Earth and the fourth American in space, after Alan Shepard, Gus Grissom, and Glenn.

Commissioned into the U.S. Navy in 1949, Carpenter became a naval aviator, flying a Lockheed P-2 Neptune with Patrol Squadron 6 (VP-6) on reconnaissance and anti-submarine warfare missions along the coasts of Soviet Union and China during the Korean War and the Cold War. In 1954, he attended the U.S. Naval Test Pilot School at NAS Patuxent River, Maryland, in 1954 and became a test pilot. In 1958 he was named Air Intelligence Officer of USS Hornet, which was then in dry dock at the Bremerton Navy Yard. ( Full article...)
edit

Did You Know?- View different entries

This portal is maintained by WikiProject Colorado and the following Wikipedians:

We invite you to join us.