From Wikipedia
https://en.wikipedia.org/wiki/Portal:Cities
Wikipedia portal for content related to Cities

The city of Arbil in Kurdistan has a radial urban structure centred on an ancient fortress.

A city is a large human settlement. It can be defined as a permanent and densely settled place with administratively defined boundaries whose members work primarily on non-agricultural tasks. Cities generally have extensive systems for housing, transportation, sanitation, utilities, land use, production of goods, and communication. Their density facilitates interaction between people, government organisations and businesses, sometimes benefiting different parties in the process, such as improving efficiency of goods and service distribution.

Historically, city-dwellers have been a small proportion of humanity overall, but following two centuries of unprecedented and rapid urbanization, more than half of the world population now lives in cities, which has had profound consequences for global sustainability. Present-day cities usually form the core of larger metropolitan areas and urban areas—creating numerous commuters traveling towards city centres for employment, entertainment, and edification. However, in a world of intensifying globalisation, all cities are to varying degrees also connected globally beyond these regions. This increased influence means that cities also have significant influences on global issues, such as sustainable development, global warming and global health. Because of these major influences on global issues, the international community has prioritized investment in sustainable cities through Sustainable Development Goal 11. Due to the efficiency of transportation and the smaller land consumption, dense cities hold the potential to have a smaller ecological footprint per inhabitant than more sparsely populated areas. Therefore, compact cities are often referred to as a crucial element of fighting climate change. However, this concentration can also have significant negative consequences, such as forming urban heat islands, concentrating pollution, and stressing water supplies and other resources. ( Full article...)

Lima ( /ˈliːmə/ LEE-mə; Spanish pronunciation:  [ˈlima]) is the capital and the largest city of Peru. It is located in the valleys of the Chillón, Rímac and Lurín Rivers, in the desert zone of the central coastal part of the country, overlooking the Pacific Ocean. Together with the seaport of Callao, it forms a contiguous urban area known as the Lima Metropolitan Area. With a population of more than 9.5 million, Lima is one of the largest cities in the Americas.

Lima was named by natives in the agricultural region known by native Peruvians as Limaq. It became the capital and most important city in the Viceroyalty of Peru. Following the Peruvian War of Independence, it became the capital of the Republic of Peru (República del Perú). Around one-third of the national population lives in the metropolitan area. ( Full article...)

Did you know - Show different entries 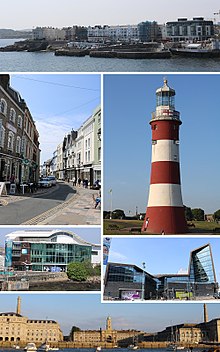 listen)) is a port city and unitary authority in South West England. It is located on the south coast of Devon, approximately 37 miles (60 km) south-west of Exeter and 190 miles (310 km) south-west of London. It is bordered by Cornwall to the west and south-west.

Plymouth's early history extends to the Bronze Age when a first settlement emerged at Mount Batten. This settlement continued as a trading post for the Roman Empire, until it was surpassed by the more prosperous village of Sutton founded in the ninth century, now called Plymouth. In 1620, the Pilgrim Fathers departed Plymouth for the New World and established Plymouth Colony, the second English settlement in what is now the United States of America. During the English Civil War, the town was held by the Parliamentarians and was besieged between 1642 and 1646. ( Full article...) 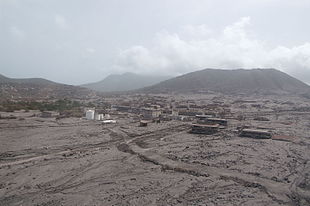 Plymouth, Montserrat is the only ghost town that is the capital of a modern political territory.

A ghost town or alternatively deserted city or abandoned city is an abandoned village, town, or city, usually one that contains substantial visible remaining buildings and infrastructure such as roads. A town often becomes a ghost town because the economic activity that supported it (usually industrial or agricultural) has failed or ended for any reason (e.g. a host ore deposit exhausted by metal mining). The town could also have declined due to natural or human-caused disasters such as floods, prolonged droughts, extreme heat or extreme cold, government actions, uncontrolled lawlessness, war, pollution, or nuclear disasters. The term can sometimes refer to cities, towns, and neighbourhoods that are still populated, but significantly less so than in past years; for example, those affected by high levels of unemployment and dereliction.

Some ghost towns, especially those that preserve period-specific architecture, have become tourist attractions. Some examples are Bannack in the United States, Barkerville in Canada, Craco in Italy, Agdam in Azerbaijan, Kolmanskop in Namibia, Pripyat in Ukraine, and Dhanushkodi in India. ( Full article...)