From Wikipedia
https://en.wikipedia.org/wiki/Portal:Caribbean
Wikipedia portal for content related to the Caribbean
The CARIBBEAN PORTAL

A mostly tropical geography, the climates are greatly shaped by sea temperatures and precipitation, with the hurricane season regularly leading to natural disasters. Because of its tropical climate and low-lying island geography, the Caribbean is vulnerable to a number of climate change effects, including increased storm intensity, saltwater intrusion, sea level rise and coastal erosion, and precipitation variability. These weather changes will greatly change the economies of the islands, and especially the major industries of agricultural and tourism.

The Caribbean was occupied by indigenous people since at least 6000 BC. When European colonization followed the arrival of Columbus, the population was quickly decimated by brutal labour practices, enslavement and disease and on many islands, Europeans supplanted the native populations with enslaved Africans. Following the independence of Haiti from France in the early 19th century and the decline of slavery in the 19th century, island nations in the Caribbean gradually gained independence, with a wave of new states during the 1950s and 60s. Because of the proximity to the United States, there is also a long history of United States intervention in the region. ( Full article...)

The Ejército Popular Boricua (" Boricua Popular/People's Army"), also known as Los Macheteros ("The Machete Wielders"), is a clandestine organization based in Puerto Rico, with cells in the states and other nations. It campaigns for, and supports, the independence of Puerto Rico from the United States.

During their first decade of existence, they had an average of two actions per year. The group claimed responsibility for the 1978 bombing of a small power station in the San Juan area, the 1979 retaliation attacks against the United States armed forces personnel, the 1981 Muñiz Air National Guard Base attack, and a 1983 Wells Fargo bank robbery. ( Full article...)

Dominica ( /ˌdɒmɪˈniːkə/; Kalinago language: Wai‘tu kubuli; French: Dominique; Dominican Creole French: Dominik), officially the Commonwealth of Dominica, is an island country in the Caribbean. The capital, Roseau, is located on the western side of the island. It is geographically situated as part of the Windward Islands chain in the Lesser Antilles archipelago in the Caribbean Sea. The island is located near Guadeloupe to the northwest and Martinique to the south-southeast. Its area is 750 km2 (290 sq mi), and the highest point is Morne Diablotins, at 1,447 m (4,747 ft) in elevation. The population was 71,293 at the 2011 census.

The island was settled by the Arawak arriving from South America in the 5th century. The Kalinago displaced the Arawak by the 15th century. Columbus is said to have passed the island on Sunday, 3 November 1493. It was later colonised by Europeans, predominantly by the French from the 1690s to 1763. The French imported enslaved people from West Africa to Dominica to work on coffee plantations. Great Britain took possession in 1763 after the Seven Years' War, and it gradually established English as its official language. The island gained independence as a republic in 1978. ( Full article...)

Selected fare or cuisine - show another

Jamaican cuisine includes a mixture of cooking techniques, flavours and spices influenced by Amerindian, African, Irish, English, French, Portuguese, Spanish, Indian, Chinese and Middle Eastern people who have inhabited the island. It is also influenced by the crops introduced into the island from tropical Southeast Asia. All of which are now grown locally in Jamaica. A wide variety of seafood, tropical fruits and meats are available.

Some Jamaican dishes are variations on cuisines brought to the island from elsewhere. These are often modified to incorporate local produce and spices. Others are novel or fusion and have developed locally. Popular Jamaican dishes include curry goat, fried dumplings, and ackee and saltfish.

This is a Featured article, which represents some of the best content on English Wikipedia. 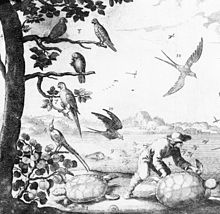 The Lesser Antillean macaw or Guadeloupe macaw (Ara guadeloupensis) is a hypothetical extinct species of macaw that is thought to have been endemic to the Lesser Antillean island region of Guadeloupe. In spite of the absence of conserved specimens, many details about the Lesser Antillean macaw are known from several contemporary accounts, and the bird is the subject of some illustrations. Austin Hobart Clark described the species on the basis of these accounts in 1905. Due to the lack of physical remains, and the possibility that sightings were of macaws from the South American mainland, doubts have been raised about the existence of this species. A phalanx bone from the island of Marie-Galante confirmed the existence of a similar-sized macaw inhabiting the region prior to the arrival of humans and was correlated with the Lesser Antillean macaw in 2015. Later that year, historical sources distinguishing between the red macaws of Guadeloupe and the scarlet macaw (A. macao) of the mainland were identified, further supporting its validity.

According to contemporary descriptions, the body of the Lesser Antillean macaw was red and the wings were red, blue and yellow. The tail feathers were between 38 and 51 cm (15 and 20 in) long. Apart from the smaller size and the all-red coloration of the tail feathers, it resembled the scarlet macaw and may, therefore, have been a close relative of that species. The bird ate fruit – including the poisonous manchineel, was monogamous, nested in trees and laid two eggs once or twice a year. Early writers described it as being abundant in Guadeloupe, but it was becoming rare by 1760, and only survived in uninhabited areas. Disease and hunting by humans are thought to have eradicated it shortly afterward. The Lesser Antillean macaw is one of 13 extinct macaw species that have been proposed to have lived in the Caribbean islands. Many of these species are now considered dubious because only three are known from physical remains, and there are no extant endemic macaws on the islands today. ( Full article...)
edit

The music of the Bahamas is associated primarily with Junkanoo, a celebration which occurs on Boxing Day and again on New Year's Day. Parades and other celebrations mark the ceremony. Groups like The Baha Men, Ronnie Butler and Kirkland Bodie have gained massive popularity in Japan, the United States and other places. Other popular Bahamian artists include Stileet and Stevie S. ( Full article...)

The following are images from various Caribbean-related articles on Wikipedia.
edit