Biology is the scientific study of life. It is a natural science with a broad scope but has several unifying themes that tie it together as a single, coherent field. For instance, all living organisms are made up of cells that process hereditary information encoded in genes, which can be transmitted to future generations. Another major theme is evolution, which explains the unity and diversity of life. Finally, all living organisms require energy to move, grow, and reproduce, as well as to regulate their own internal environment.

Biologists are able to study life at multiple levels of organization. From the molecular biology of a cell to the anatomy and physiology of plants and animals, and to the evolution of populations. Thus, there are multiple subdisciplines within biology, each defined by the nature of their research questions and the tools that they used. Like other scientists, biologists use the scientific method to make observations, pose questions, generate hypotheses, and perform experiments to satisfy their curiosity about the world around them. ( Full article...)

Adenanthos cuneatus, also known as coastal jugflower, flame bush, bridle bush and sweat bush, is a shrub of the family Proteaceae native to the south coast of Western Australia. The French naturalist Jacques Labillardière originally described it in 1805. Within the genus Adenanthos, it lies in the section Adenanthos and is most closely related to A. stictus. A. cuneatus has hybridized with four other species of Adenanthos. Growing to 2 m (6 ft 7 in) high and wide, it is erect to prostrate in habit, with wedge-shaped lobed leaves covered in fine silvery hair. The single red flowers are insignificant, and appear all year, though especially in late spring. The reddish new growth occurs over the summer. 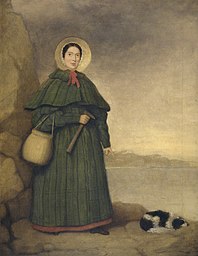 Mary Anning (21 May 1799 – 9 March 1847) was a British fossil collector, dealer and palaeontologist who became known around the world for important finds she made in the Jurassic age marine fossil beds at Lyme Regis where she lived. Her work contributed to the fundamental changes in scientific thinking about prehistoric life and the history of the earth that occurred in the early 19th century.

Anning searched for fossils in the area's Blue Lias cliffs, particularly during the winter months when landslides exposed new fossils that had to be collected quickly, before they were lost to the sea. It was dangerous work, and she nearly lost her life in 1833 during a landslide that killed her dog Tray. Her discoveries included the first ichthyosaur skeleton to be correctly identified, which she and her brother Joseph found when she was just twelve years old; and the first two plesiosaur skeletons ever found. Her observations played a key role in the discoveries that belemnite fossils contained fossilised ink sacs, and that coprolites, known as bezoar stones at the time, were fossilised faeces.

Anning's gender and social class prevented her from fully participating in the scientific community of 19th-century Britain—dominated as it was by wealthy Anglican gentlemen. She struggled financially for much of her life. Her family were poor, and as religious dissenters were subject to legal discrimination. Her father, a cabinetmaker, died when she was eleven. She became well known in geological circles around the world, and was consulted on issues of anatomy as well as about collecting fossils. However, as a woman she was not eligible to join the Geological Society of London, and she did not always receive full credit for her scientific contributions. Indeed she wrote in a letter: "The world has used me so unkindly, I fear it has made me suspicious of everyone." The only scientific writing of hers published in her lifetime appeared in the Magazine of Natural History in 1839, an extract from a letter which Anning had written to the magazine's editor questioning one of its claims. After her death her unusual life story attracted increasing interest. Charles Dickens wrote of her in 1865 that "[t]he carpenter's daughter has won a name for herself, and has deserved to win it."

A complete list of scientific WikiProjects can be found here. See also Wikispecies, a Wikimedia project dedicated to classification of biological species.