From Wikipedia
https://en.wikipedia.org/wiki/Portal:Belarus
Wikipedia portal for content related to Belarus

Belarus, officially the Republic of Belarus, is a landlocked country in Eastern Europe. It is bordered by Russia to the east and northeast, Ukraine to the south, Poland to the west, and Lithuania and Latvia to the northwest. Covering an area of 207,600 square kilometres (80,200 sq mi) and with a population of 9.3 million, Belarus is the thirteenth-largest and the twentieth-most populous country in Europe. The country is administratively divided into seven regions. Minsk is the capital and largest city.

Until the 20th century, different states at various times controlled the lands of modern-day Belarus, including Kievan Rus', the Principality of Polotsk, the Grand Duchy of Lithuania, the Polish–Lithuanian Commonwealth, and the Russian Empire. In the aftermath of the Russian Revolution in 1917, different states arose competing for legitimacy amidst the Civil War, ultimately ending in the rise of the Byelorussian SSR, which became a founding constituent republic of the Soviet Union in 1922. After the Polish-Soviet War, Belarus lost almost half of its territory to Poland. Much of the borders of Belarus took their modern shape in 1939, when some lands of the Second Polish Republic were reintegrated into it after the Soviet invasion of Poland, and were finalized after World War II. During World War II, military operations devastated Belarus, which lost about a quarter of its population and half of its economic resources. The republic was redeveloped in the post-war years. In 1945, the Byelorussian SSR became a founding member of the United Nations, along with the Soviet Union.

The parliament of the republic proclaimed the sovereignty of Belarus on 27 July 1990, and during the dissolution of the Soviet Union, Belarus declared independence on 25 August 1991. Following the adoption of a new constitution in 1994, Alexander Lukashenko was elected Belarus's first president in the country's first and only free election post-independence, serving as president ever since. Lukashenko's government is widely considered to be authoritarian and human rights groups consider human rights in the country to be poor. Belarus is the only country in Europe officially using the death penalty. Lukashenko has continued a number of Soviet-era policies, such as state ownership of large sections of the economy. In 2000, Belarus and Russia signed a treaty for greater cooperation, forming the Union State. ( Full article...)

More about Belarus...
Refresh with new selections below (purge)

Mogilev ( official transliteration: Mahilioŭ; also Mahilyow; Belarusian: Магілёў, pronounced  [maɣʲiˈlʲou̯]; Russian: Могилёв, pronounced  [məɡʲɪˈlʲɵf]) is a city in eastern Belarus, on the Dnieper River, about 76 kilometres (47 miles) from the border with Russia's Smolensk Oblast and 105 km (65 miles) from the border with Russia's Bryansk Oblast. , its population was 360,918, up from an estimated 106,000 in 1956. It is the administrative centre of the Mogilev Region and the third largest city in Belarus. ( Full article...) 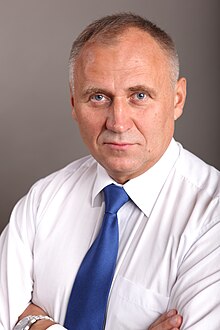 Mikola (Mikalai) Statkevich ( Belarusian: Мікола Віктаравіч Статкевіч, Russian: Николай Викторович Статкевич, born 12 August 1956) is a Belarusian politician and presidential candidate at the 2010 election. Since May 31, 2020 he is held in prison by Belarusian authorities. Viasna Human Rights Centre recognized him as a political prisoner. ( Full article...)

The following are images from various Belarus-related articles on Wikipedia.

This page was created using Portal:Belarus/New article announcements. It is created for everyone interested in Belarus-related articles to notice everything new.

This list was generated from these rules. Questions and feedback are always welcome! The search is being run daily with the most recent ~14 days of results. Note: Some articles may not be relevant to this project.

Note: The list display can now be customized by each user. See List display personalization for details.